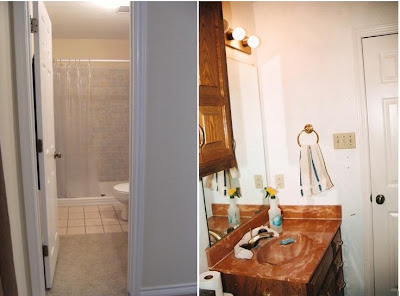 (Notice the towel wrapped around the faucet? That's a redneck temporary leak repair.) 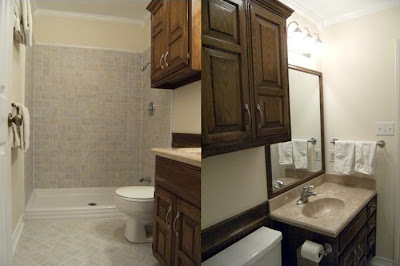 When last I left this story, in this entry, I had started painting. I had taken the toilet out of the bathroom when Hubby was gone one weekend. It was all I could do to get it out of the bathroom and into the bedroom, where it sat for several weeks. Surprisingly, you can get used to a toilet sitting in the middle of the bedroom floor, a ladder blocking the window, and various tools lined up against the wall, walking by without noticing as if everyone has a toilet by the bed.

After taking out the toilet, the plan was simple: paint the walls with some leftover paint and replace the floor tile with leftover tile. Just a few days, and the master bathroom would finally be finished. The original floor tile was just in the small area of the toilet and shower. There was carpet in front of the sink cabinet. (I know what you are thinking - carpet in the bathroom, ewwww. I knoooow, what was I thinking, especially in a tiny bathroom.) The tile was loose so it was a good time to take out all the flooring and tile the entire bathroom. Both tile and carpet were fairly easy to get out so it would seem to be an easy job.

When we bought the tile for the shower, we bought enough to do the counter also, but as time went by, I decided the less grout I had to clean, the better, so we replaced the hideous rust colored cultured marble sink/counter top with a less hideous light brown one. So we had enough tile to do the whole floor. It's not the large tile that is popular today, but with our uneven slab, small tile seems to work better anyway.

I laid it out in straight rows (and I swear I took a picture to show you but I can't find it now) but it looked so blah that I set it on a diagonal. That meant renting a tile saw, a lot more cuts, and a lot more time.

After the toilet was out, I remembered that we never had done anything across the top of the beadboard paneling we put behind the toilet. We had planned to put a row of tile across the whole wall at one time, so now that wouldn't work. So I bought some wood trim pieces and made a rail the same height as the backsplash around the counter. I also bought some oak crown molding for the top of the linen cabinet, and some chair rail molding (which Hubby dadoed) to make a mirror frame. 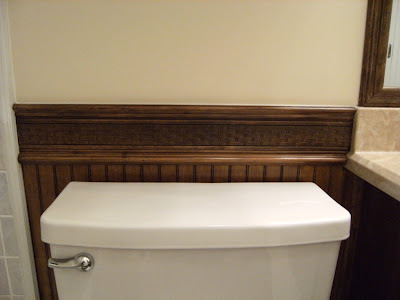 The old cabinets were that 1980's orange-y oak. Not only did they look bad with the new countertop, they had several chips and places where the finish was worn and peeled. I was going to paint it, and since it was going to be painted anyway, I thought it was a good time to try out gel stain in case I wanted to do it on the kitchen cabinets. It was a little more work than I thought it was going to be, but I liked it so did all the wood in the bathroom. I just hope it holds up as it seemed fairly fragile after just one coat of a gel finish. I've got four finish coats on now and plan to put on a couple more after I finish touching up a few spots.

Here is a photo with the gel stain on everything except one drawer which has the original finish. Quite a difference! (even though this picture brings out the reddish tones for some reason) 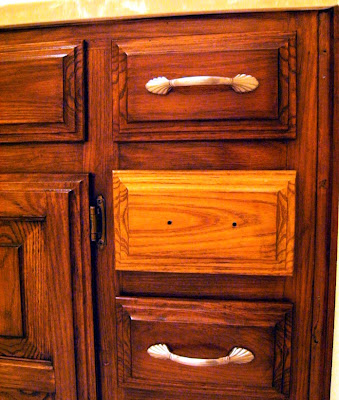 I also added crown molding around the ceiling. I already had the molding that we had taken out of another room; I just had to recut it. Then I noticed that the ceiling light fixture was not just the color of rusty metal, it was rusty metal. I really didn't want to spend any money on a light fixture that I obviously never look at, so I took it down and sanded the metal base, primed it, and then used a satin nickle spray on it.

So that's how a simple project got longer and harder. I still have to do a few touch-ups, replace the GFI outlet, and hang some pictures, but I couldn't wait. 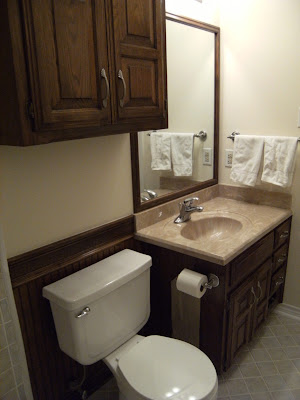 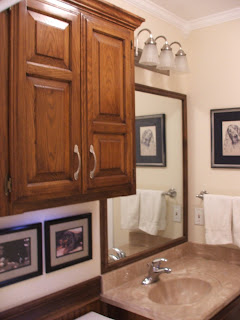 Besides the shower base and all the tile which were bought soon after we moved into this house in 1996, this is what we've done to get to this point:

Another update: Hubby and I were split on what kind of top coat to put over the gel stain. I wanted a gel finish because it seemed like the right thing over a gel stain. Hubby wanted a polyurethane because it was, um, cheaper. I won. But a couple of days after putting the doors on, I noticed a spot on the top cabinet, a small scratch that had penetrated to the bare wood. Then I was concerned that the finish wouldn't hold up very long. So I did an experiment.

I pulled a drawer from the cabinet in the shed. It was also original to the house, but didn't fit when we first remodeled. I did the same prep as the rest of the cabinets and put the same gel finish on it. I let it dry for a couple of days and then used blue tape to divide it into three sections. On the left and middle sections I put three coats of gel finish, and on the middle and right sections I put three coats of satin spar urethane. I applied it with a cloth just like the gel finish and it looked just as good. I know the tape says polyurethane, but I changed my mind after I wrote on the tape. So the middle section has three coats of gel finish and three coats of spar urethane. Then I waited a week for it to harden a little, got a sharp knife from my kitchen, and made scratches in every section. They all scratched as you can see but the section with gel finish only scratched all the way to the wood. The other two sections only scratched the surface but didn't penetrate to the gel stain part. They were fixable with a little sanding and more spar urethane. The first section could only be repaired with gel stain touch up and then finish coat, but it looked repaired.

My conclusion is that the gel finish alone just isn't hard enough to hold up to everyday use. Now I know what you are thinking (because I thought it too), you are never going to scrape a knife across your cabinets. I thought that until last week when I tossed my fingernail clippers in a drawer and shut the drawer. The sharp edge of the clippers caught the edge of the cabinet, nicked it, and the cut went all the way through the gel stain. Now I have two nicks to touch up and I am going to go over everything again with three coats of spar varnish.

April 18, 2011: It's been almost a year and I thought it was time for an update. Not long after finishing the bathroom, I pulled the laundry basket out of the bottom cabinet and it scraped against one of the doors (the inside), leaving a big scratch. I decided then that it wouldn't be able to hold up to everyday use, even with the sealer on it and I quit trying to be careful with it. I figured it would get beat up and I'd just paint in a year or two. But now I've decided the sealer just cured slowly because I haven't gotten another scratch or chip on it and I have really put it to the test, pushing the laundry basket in with my feet, kicking the doors shut, and just generally being myself. I still love it, and have decided to proceed with the kitchen cabinets.

Now a sneak peak for another project I've been working on. I hope to have it finished tomorrow. 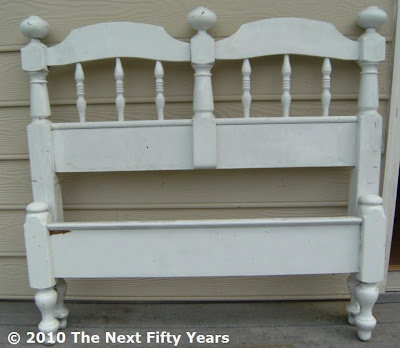 I am linking this entry to Between Naps on the Porch, for hosting Metamorphosis Monday!

Until next time, may you have blessings and successful projects,
Marti
By Marti at 30 May