I hope everyone has had a wonderful day.  Mine was good.  Very non-traditional, in fact, very non-Thanksgiving.  Hubby and I were supposed to meet Brownie at my mother's house last weekend, and Mom cancelled it.  My in-laws are having Thanksgiving at Brother Bear's house on Saturday.  So Hubby and I had the day off today.  I was really looking forward to it.  Didn't have to cook, didn't have to clean up, didn't have to make plans around anyone's schedule; a mini vacation where we could do anything we wanted to do, whenever we wanted to do it.  We planned to go geocaching.  We'd never done it before, but it sounded like fun.

Then the day began cold, windy, and rainy.  Hubby talked to his parents and they wanted to go out to eat lunch with us.  I hate to say it, but that just about killed the day for me.  Making plans wasn't on my plan of the day, and making plans to eat out on Thanksgiving Day really wasn't on my plan.  I suggested that if we were finished with our geocaching by dinner time (that's supper time to most Southerners), that we would call and see if they wanted to meet somewhere.  I knew from experience that the lines would be long for lunch.  As it turned out, we decided not to meet for lunch and Hubby and I took off.

What I found out about geocaching is that we really stink at it.  There was one that said it was off the road on a little used country road.  There WAS no other country road at the location.  There were tire tracks through someone's field, but I didn't think that could be it.  Hubby thought it was.  He tromped through the mud and poison ivy and never did find anything.  Then we drove on to the next one that promised to be easy.  The rain began pouring as we got to it, and even when it let up a bit, we couldn't find anything.

Then we went to one where the location was listed.  Surely that one would be easy.  Nope.  Couldn't find it.  So we went home.  While there, I looked through the list again to see if there were any clues we missed.  I also saw another one at the cemetery near me.  I walk there quite often and thought I recognized the name on the title of the cache.  So I cheated and looked up the name on findagrave, and saw that the cache name was the picture engraved on the headstone.  So we hopped in the car and went to the cemetery, found the headstone, and then began looking for nearby hiding places.  Hubby found it fairly quickly.  I guess that wasn't totally cheating since Hubby did use the GPS to hone in on the exact location.  But at least we finally found one. Victory!

And an update on the home front.  I put the sixth and final coat of varnish on the kitchen sink cabinet yesterday.  Don't be too impressed, they were thin coats because I put them on with a cloth.  Probably equivalent to two or three brushed coats, and much smoother.  While I had the varnish out, I thought I might as well put a few coats on the bathroom cabinet that only had gel finish.  Hubby was none too pleased about having the kitchen and the master bathroom out of commission at the same time.  And the bathroom cabinet took forever to dry.  Our humidity level hovered between 70 and 80 percent during that time, and it took two days for one coat to dry even with a fan and the dehumidifier running.  The kitchen cabinets dried much faster.  Have no idea why. 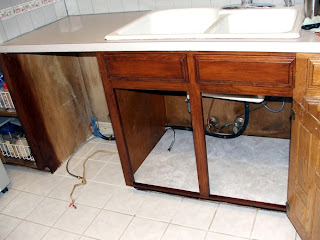 So now we are ready to put the new dishwasher in.  The cabinets are darker, and with more red than the bathroom cabinets, even though it is the same stain.  I'm not sure I like it, but Hubby does.  Oh well.  I know how to redo it if I can't live with it.  I still want to keep the tile, and put colorant on the grout.  But I am going to hold off until the dining addition is done, if it ever gets done.

The cat is friendly one day, and standoffish the next.  He wants in, but then he won't come in.  He is also scratching the deck.  Not a good thing, and I'm going to see if I can make an easy scratching post.  He also won't sleep in the dog house, even with his blanket in there.  I don't know where he goes when it's raining.  I checked under his favorite bush last night and he wasn't there, and he didn't come when I called.  I guess he is roaming after all.

Until next time, may you have blessings and victories,
Marti
Posted by Marti at 6:24 PM