When Plan B Fails

I thought the only problem with Plan B is that the cat might not show up this morning. He did show up but when he didn't get fed right away, he left to visit the next home on his route. What he didn't know is that I called all my neighbors and asked them not to leave food out yesterday or this morning. Still, I had to call and call until I'm sure the neighbors thought there was a hyena caught in a bear trap over here, and I opened a can of tuna and walked up and down the driveway letting its fragrance waft in the breeze. Then, he came back.

But the reason Plan B failed is because I didn't consider the possibility that the cat might not like the taste of pill-flavored tuna. He took a bite or two and refused to eat any more. I continued to pet him and noticed that he was losing his balance as he rubbed against the edge of the door. His eyes were glazing over but he wouldn't lay down. He walked through the bowl of tuna and then wobbled and I picked him up. He tensed a bit, but I sat on the floor and held him in my lap, petting him and telling him he was getting sleepy. Hypnotism isn't as easy as it looks on tv because he didn't fall for it. But now that I had tuna smeared all over me, he liked me a lot better.

He wanted to leave. Cat instinct is to find a hiding place when they don't feel right, I guess. Time was running out and Hubby came up with Plan C. We both put on leather gloves (mine were embroidered red suede with fleece lining) and took him into the garage and shut the door. He was not happy about that, but I kept petting him. Hubby opened the squeeze cage the vet loaned us. Cat rubbed against the cage, and stuck his head in.

"It's now or never," Hubby said, and we both shoved him in and shut the cage door. The cat immediately started looking for a way out and found an opening. It was a little window type thing and the wire door was open. He got his head through it and tried to push through. Luckily, he has been eating really well lately, and couldn't get the rest of his fat self through. When he pulled his head back in to regroup, Hubby shut the window.

He clawed and bit the cage all the way to the vet's office. I was prepared to stop and jump out of the car if the cat got out. When I walked in the vet's office door with him, he began a blood-curdling growling meow. The vet looked at him and told me that instead of picking him up this afternoon, I should come back in an hour while he was still sedated. I wished them luck and God rest their souls if the cat escaped that cage.

An hour later, I brought back a bigger pet carrier and the vet carried him out of the recovery room to put him in the cage. The cat was completely stiff, tail straight out, legs pointing straight up. Stiff! I stared in horror and thought the vet had given him the big send off instead of the little snip snip. But apparently stiff cat syndrome is not uncommon after surgery.

Now the cat is coming out of the anesthesia and I am supposed to check on him to make sure he doesn't fall on his face and suffocate. I just looked in on him, and he had moved. I opened the cage to readjust him, and he tried to bite me. This is one unhappy cat. If I have to move him again, I may just have to tilt the cage. 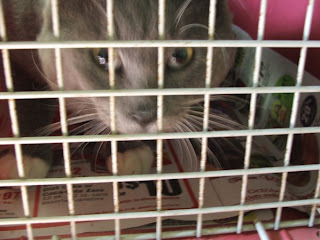 Sorry about the poor quality picture. My camera doesn't do well in low light and I didn't want to further traumatize the cat with the flash.

Update: It is now late afternoon and the cat seems to be completely alert. And unhappy. Long, mournful meows when I check on him. We're keeping the cage covered so he won't hurt himself trying to get out through the wire openings. Hey, it works for birds. This cat has deep-seated confinement issues.

Until next time, may you have blessings and strong cages,
Marti