A Decorative Topiary Would Be Wasted on The Cat 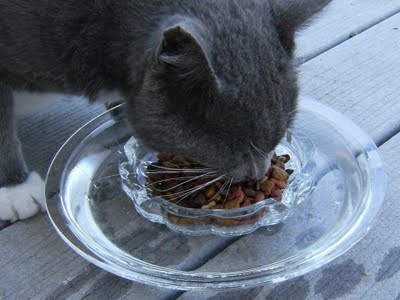 For some reason, the cat will not eat all the food in his bowl and then the ants find it and the remaining food has to be thrown out before the cat sticks his head in it again. The only thing that works is to put the cat food bowl inside a larger bowl of water, as long as the cat doesn't push it to the edge.

So to thwart the ants and keep the cat from eating ants, I wanted to permanently attach a bowl to the center of a pie pan, so I can fill the pie pan with water. The hardest part was finding a flat-bottomed glass bowl that the cat could get head into. I finally bought an ashtray at the dollar store. The cat doesn't care as long as it is filled several times a day.

Most glass topiaries are glued together with regular silicone adhesive, but that isn't food safe and it is possible the cat will drink the water out of the pie pan. So I bought aquarium adhesive from the pet store.

I wanted a picture of just the bowl with food and water, but the cat thinks he has to eat every time someone touches his bowl, so I couldn't get a photo without his big head in the middle of it.

The cat has also discovered the luxury of air conditioning. At first he wasn't sure he really liked it, but now if he is out and hears it on in the garage, he meows at the door until someone lets him in.