No, I'm not calling anyone names, though at times I do feel like a bucket head myself.  This is a different kind of Bucket Head, a wet dry vacuum. I saw it at Home Depot on Saturday while I was waiting on Hubby and thought it was pretty neat. They had it hooked up to a sander or something. Then, today, after using the miter saw on a little craft project (I'll show that later this week) and clearing the mound of saw dust around it, I thought that little thing might be just the ticket. We've got a dust collector but it isn't convenient to use with the miter saw and nothing else has worked with it either. So when I needed some materials to finish another project, I bought this too. When I got home, Hubby cut a hole in my workbench for the hose and power cord, and I placed it inside the workbench. 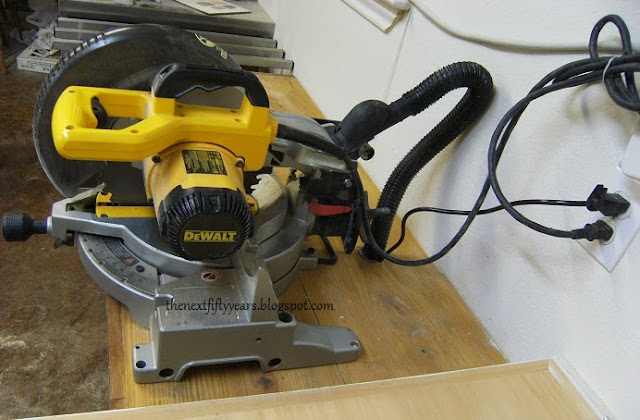 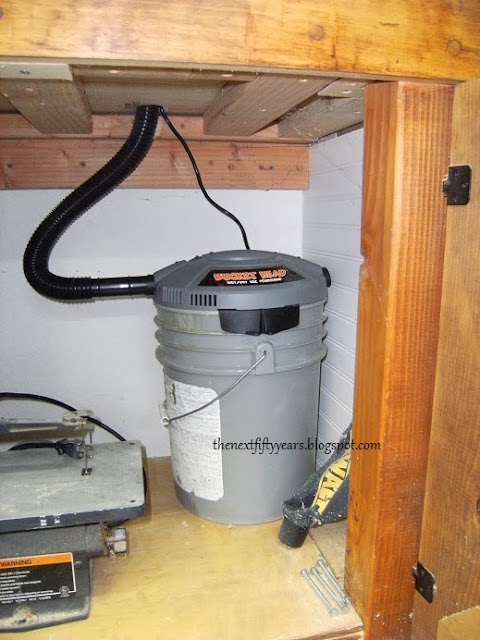 The jury is still out whether this will keep sawdust from piling up behind the saw. I chopped up a few scraps and it seemed to get most of the sawdust. Then, when I started cutting the trim boards for my project, I forgot to turn it on.

By the way, I did not receive any compensation for this post, though it would be nice.

Update 1/23/2014: Today I noticed that there wasn't any suction and thought, uh oh, the reviews were right, it quit working. But that wasn't it. The tube was clogged. I thought it might be a big chunk of wood, but it was nothing more than sawdust. It was packed too tightly for me to push it out with a stick and I had to painstakingly pick it out with a claw grabber. But then it worked fine again.

Update 2/1/2014:  Once again the tube clogged.  I have gotten into the habit of pulling the tube out of the miter saw to check for suction before and after each cutting session.  There seems to be a lot of sawdust behind the saw every time I use it, so I decided to do a test to see how much sawdust it is actually pulling in.


Then I cleaned up the work area before the next set.


So the vac is pulling in over half the sawdust that would normally end up behind the saw.


So basically, it catches the sawdust that comes directly behind the saw blade. The suction area is limited by the size of the saw connection, and the suction isn't strong enough to catch the dust blowing out to the sides. Still, it has enough suction that little pieces from a cut tend to move toward the vac area instead of falling down to the surface below the saw. 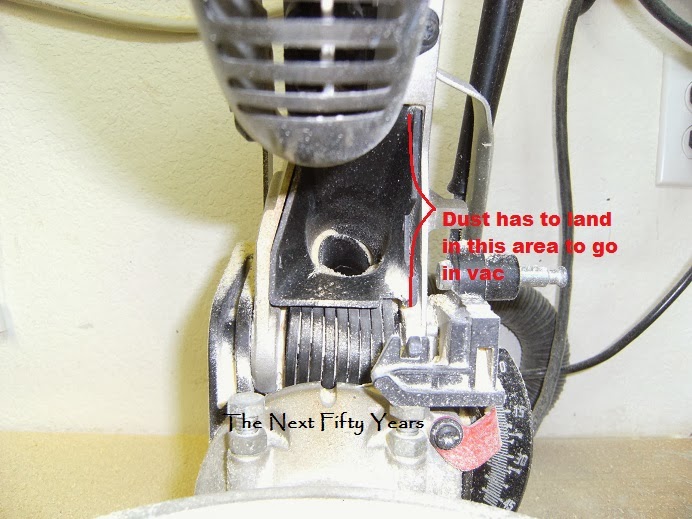 Even though it doesn't catch all the sawdust, it pulls in quite a bit, and keeps the work area cleaner. It also collects the dust that normally spins around to land on me and the floor, and a sawdust free floor is a safer floor. The sawdust that is not caught is easily vacuumed by just pulling the tube out of the saw and the tip of that has a funnel shape that makes it easier to get the dust from crevices. So all in all, I am pleased with it.

By Marti at 20 January