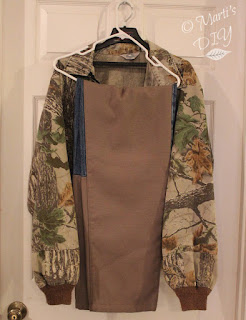 Hubby is an avid hunter. He seems to think it is a vacation to spend a week building stands, filling feeders, walking miles through tick-infested brush, and carrying heavy loads up and down hills. Obviously, we have not been on enough vacations.

He grew up hunting and fishing with his father, which is where he also developed his love of camping and hiking. But where his father liked to sit still and let the game come to him, Hubby likes to seek it out in remote places. My father-in-law especially loved fishing, and I enjoyed fishing with him too. It was really relaxing to sit in the boat, floating on the water until a fish snagged the bait, and then pulling it in while he scooped it up with the net.

After he bought a bass boat, I once went with Hubby. Once. The boat painfully bounced across the waves as he ran full throttle across the lake, finally slowing down to ease into one of the creeks that fed the lake. When the water was too shallow for the big motor, he popped out the trolling motor and kept going, scraping against tree limbs, going through spider webs, and bumping into underwater tree stumps.

When we finally arrived at a spot he deemed worthy, he told me to take the seat on the back platform and he would take the front seat so he could control the trolling motor. And then he handed me a paddle.

"To knock off the snakes as they climb up the motor," he answered.

"Take me home." I demanded.

After we sold that boat, Hubby turned his interest to hunting.

I knew of Hubby's interest in hunting long before I knew he liked to fish. When he was a freshman in college, he and a suitemate (like a roommate but without the snoring in the same room) split the cost of a bag of decoys and would go duck hunting before breakfast. Their boss kept their guns for them, and they gave their ducks to him in return.

After we married, Hubby continued to hunt duck, quail, dove, and pheasant - anything to put meat on the table. We both like quail, dove and duck are okay if prepared correctly, but pheasant... pheasant must be an acquired taste, like haggis or blue cheese. At that time, we lived in an area where pheasant were plentiful and we were starving students, so he brought home a lot of pheasant. If there is a way to prepare pheasant so it isn't dry and tough, I never found it. The first time we hosted Thanksgiving dinner, my parents came for dinner. Since we couldn't afford to buy a turkey, we were going to have pheasant. Until then, we had cut the pheasant into pieces and fried it like chicken. This was the first time we ever tried to bake it, and I had a "foolproof" recipe from a fellow starving college student. When the baking time was up, I pulled the pan out of the oven and immediately lost my appetite. If you've ever seen a baked turkey, you know what it looks like, a plump, rounded bird with thick drumsticks on the sides. A pheasant doesn't come out of the oven like that. Even though it browned, it had a skinny, sunken chest cavity, and the skinny legs, which were tucked in neatly on each side when it went into the oven were now sticking straight out. It is really hard to eat a bird that looks like it has rigor mortis.

Once I graduated, got a job, and we could afford to buy meat from the grocery store, he left the pheasant for his hunting buddies who were still in college, and I gladly passed along my handful of not-so-great recipes.

But Hubby continued to hunt quail and dove, those delicious delicacies that we would never be able to afford from the store (not that they carried them) or at a restaurant on our budget. And later, he was invited to join a hunting lease with some of his friends. It was on land that had deer as well as quail and dove. We didn't have the money then for the extravagance of a hunting lease, even though a single deer would feed us all winter. His friends knew that, so Hubby paid for his share with labor. He got to do all the things his friends didn't really want to do, like moving the out-house, ridding the out-house of snakes, spiders, and wasp nests, roofing the cabin, and clearing brush. But he also got to hunt which made him happy, and he took his game to a nearby meat processor, which made me happy.

After a few years, our finances had improved so he could pay his share of the lease. But we still didn't have enough for extras, so when there was a leak in their cabin and mattresses were ruined, we didn't have the money for new bedding. He took an extra mattress from our daughter's trundle bed, and I dug out an old set of sheets with so much pilling they felt like gritty sandpaper. After a long day of hunting trip fun, Hubby barely knew there were sheets on the bed, much less that they were pilled. When his hunting jacket shrunk in the wash, I extended the sleeves by using fabric from the back pocket. When his overalls ripped, I patched them with pieces from old jeans.

Since I only see this stuff when it's here in the laundry, and since he's had this stuff for almost ten years, I never really thought of Hubby wearing patched clothes when he hunting, or going to town with his friends. And until I pulled the sheets out of the dryer today, I never thought that he has been putting up with jokes made by his snickering buddies. Because not only are his sheets covered with pills, they are pink, purple, and blue!

At least he doesn't have to worry about any of those guys taking his sheets. But maybe it's time to move him up to some big boy sheets.. 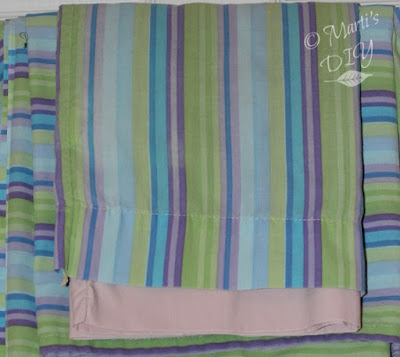 Linked to Silly Sunday at Comedy Plus.
Posted by Marti at 6:54 AM