Thank you Girlie on the Edge for the warm welcome. I have always enjoyed this kind of writing; it reminds me of Weekly Readers in grade school that had a sentence starter like "It was a dark and stormy night..." If there is a way to comment on your blog, I haven't been able to find it, so let me just comment here that your Six last week was so touching.

Last week and this week, when I saw the cue word, a story instantly played out in my mind. A couple of hours ago, I asked Hubby read the one I wrote for this week and he finally said, "Gee, that's kind of dark isn't it, especially for you?" And yes, it was. In light of that, and not wanting to offend anyone, I have been trying to come up with something else. Nothing really clicked with me, but running short of time, this is what I finally settled on.


Cassie was thrilled when her husband gave her a little ball of fluff named Corkie the Yorkie; her cat, Bellas, was not thrilled and watched from atop the refrigerator as Corkie was petted and pampered.

A stuffed, brown monkey with floppy arms and legs soon became Corkie's favorite toy; a spotted giraffe with squeakers was a close second, but one day neither could be found.

That afternoon, she heard Corkie barking hysterically in the kitchen; Cassie called but Corkie didn't come and when she went into the kitchen to investigate, she saw Corkie barking at Bellas who was sleeping on top of the refrigerator.

The offending puppy was thoroughly scolded and put into her crate and the mistreated cat was petted and given some treats to make up for being disturbed.

The next day, Cassie heard Corkie barking again in the kitchen and she ran angrily toward the sound; when she rushed around the corner, Corkie was standing on her hind legs with her front legs pawing the refrigerator while the stuffed monkey dangled over the top edge in Bellas' mouth.

Bellas froze when she saw Cassie, and then dropped the monkey to the excited dog on the floor; Cassie cleared her throat menacingly and Bellas dropped her head and nudged the giraffe over the edge too and walked meekly to her crate. 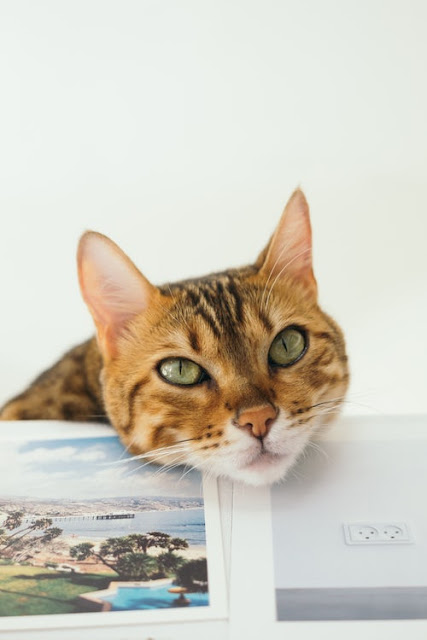 Linking to:
Six Sentence Story at Girlie on the Edge