We just limped home from a twelve day vacation.

It started great, going to a drag race event at a local race track with high school friends who brought their trailer here, but it went downhill fast. Our friends left late Sunday afternoon and we pulled out the next morning. A few hours into our trip, it began raining, and at times, the rain was so heavy we could barely see the tail lights in front of us. White knuckle driving!

Rain plagued us on every leg of our trip. We reached our first stop just after dusk, and were thankful that the rain had stopped before we got there. But as soon as I got out of the pickup to guide Hubby into the site, I found that there is something worse than setting up in the rain - swarms of mosquitoes! They were so bad that we didn't even try to level the trailer or unhook from the pickup. Hubby hooked up water and electric and got into the trailer fast. That's when we discovered our next problem. Driving through the rain, water had gotten under the slides and gotten the carpet wet. We thought it might have been because of the extra heavy rain, but it happened every day we drove with even with a light rain too, which was every leg of our trip. Water and trailers are a bad combination. So we had a new item to add to our set up checklist: dry the carpet.

The next three days were clear and we spent them doing some repairs on my mother's house. One of the things Hubby did was to replace her sump pump which had quit working in the last rain. She was thrilled and we were happy to be able to do some things for her too since we do so much for Hubby's mom who lives here. That's a story I will tell one day too, but since it will involve considerable griping, I'll save it until I can tell it without grinding my teeth.

We were hoping for clear skies when we drove the five hours to visit my oldest daughter, but it wasn't meant to be. It was clear when we got there though, and we had a really nice visit with her and the two boys she adopted. We were going to spend most of the day with her the next day, but radar showed a huge storm moving in, so we left when a light rain started. The edge of that storm kept up with us the entire drive to Roaring River State Park in Missouri.

We had borrowed some towels from my mother so we could keep the water from getting to the carpet, and it kept the carpet from getting sopping wet, but it still damp every trip. The towels though, were soaked. We arrived at the campground before our youngest daughter and son-in-law who were meeting us there. So we made a Walmart run, picked up dinner, and found a Laundromat to wash and dry our soaked laundry and ate dinner while we waited.

Skies were clear the next morning and we decided to try trout fishing. I know you are expecting a picture here. Any normal blogger would have a picture here. But my phone had no service and I didn't think to bring it for a picture. But I will tell you that the water was crystal clear and we could see the trout swimming between each section of the river. The river was more the size of a large creek, with rock dams every forty feet or so, which trapped the fish into pools. People were everywhere, calmly bringing in one fish after another. Now you would think it would be easy to catch a fish when you could see your fly land inches from the fish. And it was easy for those other people. But it wasn't easy for us. After hours of throwing every fly and worm in our box at just about every fish in the river, and donating a few hooks to the bottom of the river, Daughter and I gave up.

Finally, my son-in-law caught a mid-sized trout and as we congratulated him on getting one, he took it off the hook and threw it back. "What are you doing?!!!" we wanted to know. "It had something white on its head and I didn't want it," he says. He didn't even take a picture of it. Hubby, however, took a picture of his prize catch. Don't be jealous.

And it's not even a trout. Apparently we drove four hundred miles so he could catch the same fish, in miniature, that he can catch here.

The next day was cold and rainy so Hubby, Daughter and I played board games while Son-in-law played video games. We like board games and it is a nice way to visit too, so we didn't mind. Daughter and Son-in-law were disappointed though. It was their third camping trip in their new camper and every trip has been cold and rainy for them. They are discouraged and want to sell their camper. Mini Winnie anyone?

We broke camp the next day and hoped to drive home under clear skies. We got as far as Bentonville, Arkansas when the check engine light came on and the pickup powered down. We felt lucky that it ran long enough to get to the Chevy dealership and that they were able to start working on it right away. Unfortunately, they had to order a part and we had to camp in their parking lot overnight. They let us plug into a 20 amp outlet and it wasn't too bad except that cars came through the lot all night, driving around our trailer to check us out before going over to look at cars. That was a little unnerving. Dealerships here put a gate across the entrances at night so cars can't drive through but they encourage night visitors there. 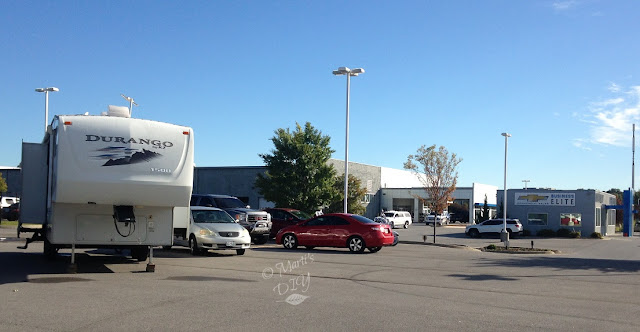 Twenty four hours and $1100 later, we were on the road again, which made that Chevy dealership the most expensive campground ever! And then we drove home in a steady rain and got home around midnight. I have never been so happy to be home!

If you are an RVer, either new to it, or an experienced camper, you know that things break or quit working from time to time.  It happens on cars and pickups too, and we get them fixed and carry on.  So don't let my experience here discourage you from the experience.  We've had far more good trips than bad.  In fact, if this is the worst trip we'll ever have, we'll be happy.

By Marti at 18 October