The older I get, the less stuff I want. The less stuff, the less cleaning. The less cleaning, the more time for fun. That's the plan. The hard part has been getting rid of all. this. stuff! I've offered it to my friends, I've listed it on buy/sell/swap groups, and I've listed it free on facebook's local town group. As one of my friends so crudely put it, "I don't want your crap to become my crap." True, some things are old enough to be antiques, but some things were still brand new in the box. I've given away a total of two items; I had to beg Hubby to load up the rest and haul it to the thrift store. He hates doing that for some reason. Maybe for the same reason he hates returning things to stores, although there, I think it's the standing in line part.

After my second eye surgery, I experience dry eyes and asked Hubby to buy me some eye drops from the store. When he brought it to me, I noticed it was contact lens solution and no where on the box did it say it could be used as eye drops or for dry eyes. He wouldn't take it back. So the next time he went to a bigger town, I asked him to buy me some eye drops. That evening when he handed me the box and, you guessed it, another box of contact lens solution.

But back to the ridding of stuff. It seems that I am not the only one trying to simplify in 2020. I wonder if it's the extra spare time we all had this year, or if other people have just looked around and realized how much easier life would be without all that stuff. I'm not sure why younger people aren't taking anything though, especially when it is free. Maybe because it isn't new? I couldn't even give away a doll and cradle. I think it's because it didn't do anything. It didn't transform into something else, the doll didn't walk and talk, and neither shot arrows out of hidden parts. It is just a doll and cradle and my kids spent hours rocking everything from dolls and stuffed animals to real live puppies. The puppies weren't keen on rocking so it was back to dolls and stuffed animals. 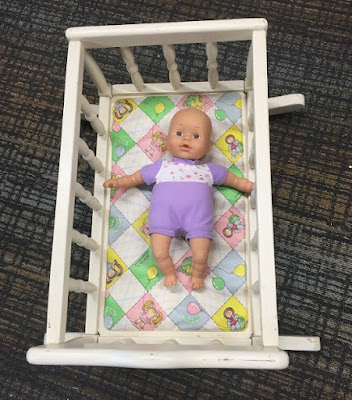 By Marti at 28 December 7 comments: