Bright Spot in My Day

Amazingly, the pond still looks good, with several lilies blooming. This is Alba: 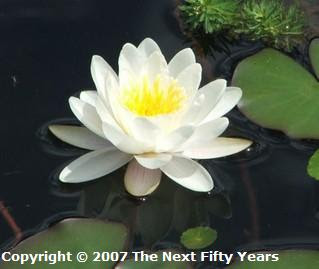 Until next time, may you have blessings and sweet flowers,
Marti
By Marti at 24 September 1 comment:

Picked less than a basket of black-eyed peas and okra this morning and dug out another row for the next garden. Surely all this digging would be considered high-impact exercise! The thrill of gardening has definitely waned. I no longer hum the song "So Round So Firm So Fully Packed" when I'm picking peas, and am actually glad to see some of the plants with rust on them so I can rip them out of the garden. I don't have quite enough peas to fill the canner, which is probably a good thing since I don't feel like shelling peas today. I don't mind putting up okra, but the freezer is getting full.

After working in the garden, I thought I'd go ahead and take my walk since I was already sweaty. I also thought it would be a good way to knock some of the mud off my shoes so I put the basket of veggies in the house and grabbed my pepper spray. And wouldn't you know it but some guy was jogging past the driveway just as I headed out. Since I had barely combed my hair this morning and hadn't brushed my teeth and had mud dropping off my shoes as I walked, I wasn't thrilled about meeting neighbors on the road. After he went by, I started walking the other direction. But he must be out of shape like me because he was behind me again by the time I got down to the end of the block. I started to warn him about a couple of unfriendly dogs at the end of the cul-de-sac but that would mean having to have eye contact so I just let him jog by. As I rounded the bend in the round to the cul-de-sac, he was turning into the driveway at the end where the most unfriendly dog lives! Boy was I glad I didn't say anything to him. I guess he noticed the pepper spray in my hand because he kept his dog beside him and for the first time the silly dog didn't run out into the road barking at me.

Speaking of silly dogs, I saw something on the Today Show that just blew my mind. People are cross-breeding dogs on purpose and getting mega bucks for the puppies. I've heard of the Cockapoo for years, but these people were breeding Puggles (Pug and Beagle mix), Borador (Border Collie and Labrador mix), etc. I can't believe we used to have a Borador and missed out on this incredible gold mine! I also can't believe people are stupid enough to fall for this "unique blend of breeding". They're mutts people! Go get one at the pound and save some animal, plus a few thousand dollars.

And then I've got to wonder what happens when these cross bred dogs are bred to each other. Are they considered mutts then? There is waaaay too much money in this country being spent on frivolity.

Ok, back to my new life. Once again, starting today, I am giving up caffeine and drinking at least eight glasses of water a day. I also thought I'd try to eat healthier, but I guess that won't start today. I had bought a big bag of carrots and opened them today to eat after walking. Every bloomin' one of them is rotten. Thanks H.E.B. I'm also rethinking this "buy less at Walmart" plan. At least I never got rotten carrots at Walmart.

I think that could account for my grouchy mood of the day.

Until next time, may you have blessings and friendly dogs,
Marti
By Marti at 20 September

Email ThisBlogThis!Share to TwitterShare to FacebookShare to Pinterest
Labels: Exercise

The First Day of the Rest of My Life.

I'm the last of the baby boomer generation, and like most of us, never thought I'd get old. Other people get old, but not me. That is, I thought that way until this year. I'm 51, my knees, one hip, and one shoulder are shot, I have osteoporosis, and continuing Candida problems. I look in the mirror and see a fat, older woman, who is beginning to gray.

I'm supposed to be walking 30 minutes every day along with weight-bearing exercises and a prescription of Fosomax, and this is supposed to stop the osteoporosis and even repair some of the damage. I don't like the thought of taking a prescription medication for the rest of my life, but I really dislike the thought of becoming a hunched over old lady with broken hips, so I walk, or at least I walk sometimes. Walking isn't doing anything for my weight; if anything, I've gained weight. Either that, or there really does exist that strange phenomenom of a clothes-shrinking-closet. 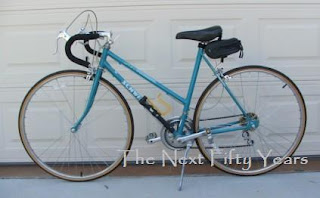 Enter the Schwinn Sprint. This is a bicycle we bought when our youngest started college. However, she soon found that the narrow tires didn't work with the brick roads and grooved pavement on campus, so she traded it for a mountain bike. We were going to sell the Sprint, but I got on it and took a spin around the driveway and decided to keep it. That was just about this time of year two years ago. I rode it several days a week and was just beginning to get the hang of it when I went back to work.

Fast forward to this year. My temporary job ended, I got the osteoporosis diagnosis, can't lift my right knee more than nine inches off the floor, and was told that that noise in my knees that sounded like gravel rubbing together was the bones in my knees grinding against each other. My doctor told me to walk at least 30 minutes a day and an hour of low-impact exercise like an exercise bike or swimming. I didn't do any of it, in fact, I slipped into a pretty deep funk and stayed that way for months.

Then, last Sunday I needed to know what a bicycle part was called and went out to the garage to look at the Sprint. It's tires were both flat so I aired them up to keep them from cracking, and then went back to my research. But it was a pretty day and I thought of going for a walk, then decided to go for a ride. I had forgotten how smooth that bicycle is. I rode down to the end of the block, around the corner and down the hill. It was like flying with the wind in my face; definitely more fun than I had had in a long time. Well, until I had to go back up the hill. I finally had to get off and walk up. It's pretty bad when I can walk faster than I can ride. My legs were trembling and I could barely get off the bike when I got home. Oh crap I'm out of shape!

The bad thing is, I can't remember when or why to change gears, or where the seat and handlebars should be adjusted. I found the bike forum I had registered at two years ago when I needed information, and started reading posts so I could see what other riders do. It's interesting, but I need a beginner's guide before I can even understand most of what they are saying.

Monday morning I woke up and sat up in bed. Yee-ouch! I think I bruised my bum. I don't know if that's possible, but sure what it feels like. My leg muscles were stiff and sore, but my rump just plain hurt. I wondered if I could even sit on the seat. Yes, believe it or not, I wasn't going to wimp out and skip riding. I am tired of seeing that old woman in the mirror, and I'd just as soon not have to get rid of all the mirrors.

I lowered the seat all the way down so I could get off the bike easier and took off. I don't know if the seat was too low or if it was my sore legs, but pedaling was much harder and I only went .2 of a mile before I had to turn around and come home. There are some repaved potholes and humps in the road made by big trucks. Going out, I stood up on the pedals but coming back my legs had turned to mush and I couldn't get off the seat. Another Yee-ouch!

Just before noon I decided that if I am going to change my life, I'd better keep track of it. So I got out the scale and weighed in. Two pounds less than when I was at the doctor's office last week, but that was after eating lunch. I think if I can remember to weigh without my tennis shoes on, I can lose another pound. Just kidding. Well, no, I'm not.

Today, Tuesday Sept. 19. I got out of bed and the bum didn't hurt quite as much. I did my usual garden chores and thought briefly of skipping the ride. Had a few moments of thinking it won't do any good, I'll never be able to ride more than .2 of a mile. Then I got a grip on myself and thought if I don't ride, I might not be able to do .2 next year. So I raised the seat an inch and took off. I looked for the driveway that marks the .2 point and wondered if I would even be able to make it that far. I just kept my eye on the driveway until I made it there and could turn around. Then I headed the Sprint, that torture device created by Satan himself, toward home. When I came across the big humps in the road, I cheated and rode in the grass. Still hurt.

Until next time, may you have blessings and easy riding,
Marti
By Marti at 19 September No comments: