Hope You All Had a Merry Christmas

And I guess I'd better say Happy New Year too since I don't seem to be posting often these days.

Both my girls, Lil's boyfriend, and my mom came down for Christmas.  It was fun, but my oh my, what a lot of work.  Next year we're having spaghetti.  Out of a can.  Brownie left Sunday, Mom left Tuesday, and Lil and her boyfriend just left this morning.  It's a relief having time to myself again but also a downer watching them drive away - knowing it could be six months or more before I see them again.

I feel terrible about this next part.  After helping them load the car, and believe me, it was loaded to the max, I noticed feathers on the deck, or what I thought was feathers.  Then I noticed spots of blood, and big smears where it looked like the cat had chased the bird around the deck.  Hubby thought the cat brought me a gift, and it got away.  But when I went out to clean the deck, I looked closely at the pile of "feathers" and saw that they were really long strands of cat fur, and the smears were claw marks, probably from fighting.  The cat hadn't come for his breakfast milk and he didn't come when I called after cleaning the deck.  Finally, I checked the dog house and he poked his head out, and then came out limping.  He had been in another brawl and had scratches and a couple of big holes in his shoulder.  One front paw was swollen and his dew claw (I guess you call it that on cats too?) may be gone.  I slathered him with dog antibiotic ointment and he made his way to his hiding spot in the flower bed.

I know there is nothing I can do to keep him from going off and getting into fights, but this happened in our backyard, and in fact there were spots of blood on the back door threshold.  It must have happened when we were out the evening before, and I wonder now if a cat or other animal came up on him while he was eating there.  We had an electric fence across the part of our backyard that doesn't have a chain link fence, and last night Hubby put it back up so at least the cat can be safe from dogs in our backyard.  We also put a board over the dog house door to make it small enough that dogs can't get in, and I put the cat in it last night while the neighbor kids were shooting off fireworks, and he seemed to relax and stayed the night.

Now I'm waiting until the thrift store opens to take a load of junk great stuff that I had been saving for the girls and they declined to take to their homes.

Until next time, may you have blessings and precious time with family,
Marti
By Marti at 30 December

Email ThisBlogThis!Share to TwitterShare to FacebookShare to Pinterest
Labels: Cat, My ordinary life

Our laundry room is undergoing yet another transformation.  Eventually, we'll get it right I guess.

I never got around to taking a picture of our last change. Changing the doors back works well, but there is just no storage in there, and anyone walking in the front door has a view of the washer and dryer.  So, I devised a plan, and Hubby began building. 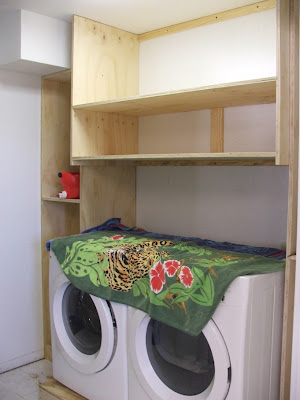 Today, I need to prime them. Oh, I also wanted to show you this neat trick Hubby thought of so the two of us could lift that center cabinet (can you say HEAVY!) to the ceiling and hold it in place while attaching it. He put these angled cleats on the side cabinets so we could lift and slide. 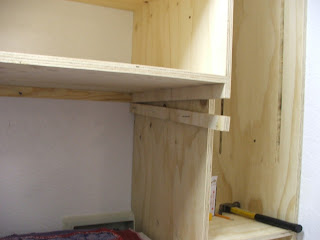 Since these are going to be painted, those holes can be filled and never be seen again.

And last, a cat update. I think he was in another fight last night because he has a new wound on his ear. And he's very clingy again today like he was the last time he came back after a brawl. I guess he loves me - in a Stockholm Syndrome kind of way. 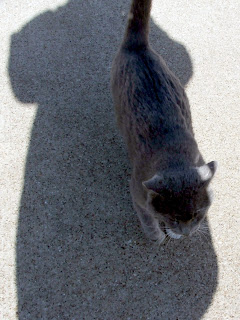 Until next time, may you have blessings and real love,
Marti
By Marti at 14 December

Jealousy, Thy Name Is Cat

Sorry it's been so long. Doing nothing has been very time consuming lately.

I've been meaning to update about the cat though. For the most part, he stays around here. He may not be king of the neighborhood anymore either. He disappeared for a few days and came back covered with scratches and he is now missing a claw on a front foot. Since then, he's been as clingy as a baby, following us around when we are outside.

Last week when I was outside putting up Christmas lights, he was sunning himself on the deck. Snoopy, a dog who lives at the end of the street, came by, and since we don't have a fence, he joined the cat on the deck. The cat didn't seem to mind as long as Snoopy didn't get too close to his food bowl.

Then Snoopy came out to the front yard to see what I was doing. This is Snoopy. 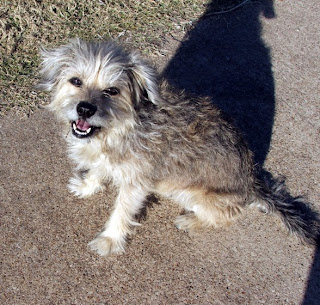 He looks more like a Benji than a Snoopy, and he has roamed our neighborhood for the last fifteen years. I don't know how he has escaped the coyotes and bobcats that have taken most of the small dogs in our neighborhood. He must lead a charmed life.

So anyway, Snoopy was walking toward me, and suddenly the cat ran toward me making a strange squawking meow, and he planted himself between Snoopy and me. This is a cat who knows how to guard the food supply.

I've also decided that the life of a cat is a lot like a teenager on eternal summer vacation. Stay up all night getting into trouble, sleep all day, eat when the urge hits, and ignore everyone who calls his name.

I'll try to update tomorrow with our latest project.

Until next time, may you have blessings and a fur baby to entertain you,
Marti
By Marti at 12 December