The Clutter Shuffle: The act of moving clutter from one room to another in order to make the first room appear neat, clean, and orderly.

I quit cleaning house, really cleaning that is, a long time ago. I figured I kept a sparkling clean house for twenty-five years and I had done my time. No one noticed when it was clean, and they immediately messed up everything I had just done anyway. And then we moved to this house where we had more stuff than room to put it, and no one would part with their beloved stuff. That's when the clutter shuffle began. And even after we added on to this house, we had more clutter than space because we had had years to collect more. A phone call that someone was on the way over and the whole family sprang into action like a well-trained tactical unit, clearing the clutter out of public spaces and stashing it behind closed doors.

When the kids left home, they left most of their clutter behind too. Most of that was packed into the attic, and they have retrieved some of it over the years. A request to come get it or it's going to the thrift store is met with wails of "Noooo, please save it until I get settled" and so it stayed.

Hubby and I have been talking about getting rid of all this excess, and we've even talked about becoming full or part-time RVers. But we look over the stuff, and can't let it go. It would be a lot easier if we didn't know how much we originally paid for this stuff we aren't using anymore. Or maybe not, a lot of things are picked up by one of us only to hear the other say "I have a plan for that," and so it remains as it is, unloved and unused.

Then, last month, I opened my big mouth and said I would host a neighborhood game day. Since I had a month, I figured I could go through this clutter, take loads to the thrift store, and not only would I have a neat and orderly home for guests, we would be that much closer to being able to downsize to an RV or smaller home.

But that hasn't happened. So now we are days away from having guests. Not enough time to sort through all this stuff, only enough time to hide it. If I can clear out three rooms every day for the next three days, I can present the facade of a neat and clean house. Let the clutter shuffle begin!

And then I join Hoarders Intense Denial of Excess. H.I.D.E.

By Marti at 29 February 3 comments:

Quote of the Day

If you are a fan of BBC's Grantchester series, or the books of the same name, you know that the main character is Sidney Chambers, vicar of the Grantchester church. This is a line from the first book in the series, Sidney Chambers and The Shadow of Death. The time and setting is December 31 as Sidney is on a train going to London for a holiday, so plenty of time for him to think about the events of the past few weeks (he just solved his first murder mystery, began to fall in love with the widow, and had all the church services surrounding Christmas) and of the coming year.

"...Sidney was determined to remain cheerful in the year ahead. He believed that the secret of happiness was to concentrate on things outside oneself. Introspection and self-awareness were the enemies of contentment..."

Interesting thought, especially since it would appear that it came about after a time of introspection. What do you think? Does self-awareness hinder happiness?

By Marti at 16 February 3 comments:

Email ThisBlogThis!Share to TwitterShare to FacebookShare to Pinterest
Labels: Introspective

We have had such a mild winter in North Texas (zone 8a last I looked) that spring has come early. We haven't had any ice or snow this year and only a few days where the temperature dipped below freezing. It's nice to see the blooms, butterflies, and honey bees, but not so nice to see the crickets and mosquitoes. As you can see, I need to spend time cleaning out my flower beds, but I took pictures anyway. It has been such a mild winter that schools are closed today to use one of the bad weather days that are built into the calendar. I think that's a first since we've lived here. 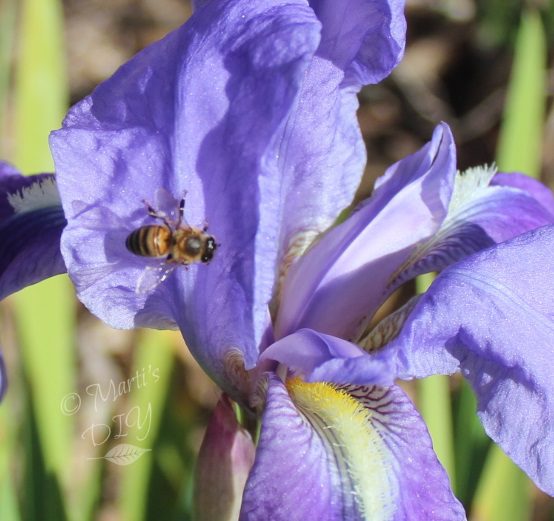 On my to-build list is a media/china cabinet for the dining room. Yes, I said media cabinet IN the dining room. I think I've told you before that I am totally addicted to the tv, and being alone all day, the tv breaks the silence and the monotony of my day. Once before, I tried to eliminate all the tv sets except the one in the family room, and even the kids complained that I wasn't cooking as much without the tv to keep me company. But there isn't a place for one in the kitchen, so it has to be in the dining room.

Right now, the tv and dvr are precariously placed on odd bits of furniture, but yesterday when I was borfing (that is boredom surfing the internet), I saw a post for the top part of a shelving unit and thought it might work in that spot. And it was FREE! For that price, I could make it work. 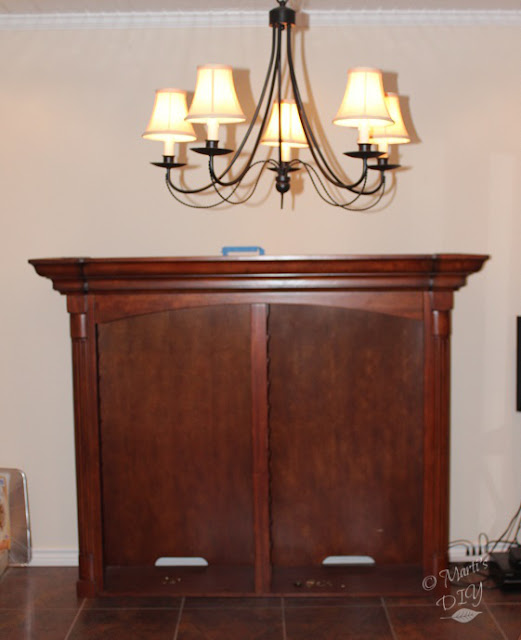 Since I am not doing any heavy lifting right now, Hubby went with me to get it, and put it in the dining room. From the photo on craigslist, I thought I might be able to turn it upside down, put a top on it, and call it good. But now that it is home, I can see that that won't work. Even though it is only about half the size of the original, it still overpowered the room; it is at least a foot taller than I originally wanted.

Plan B is to rebuild it. The piece is from Ashley furniture, and the good thing about that is that it was easy to take apart. This took about 30 minutes. 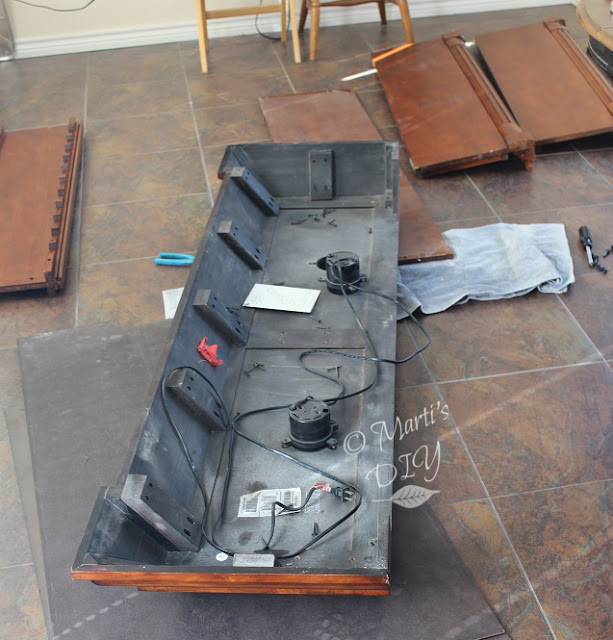 The bad thing if you have furniture from Ashley, is that it is easy to take apart. And it is made mostly of mdf. Parts of the crown molding top are real wood and the arched piece across the top of the shelves is real wood. Everything else is veneered mdf. So if a salesman tells you the furniture he is selling is solid wood, he is right, in that it is solid and not hollow. But it's not real wood. It's mdf.

By Marti at 11 February No comments:

Be Careful What you Wish For

Yesterday, we went to Waco for Storm Spotter training. Well, Hubby went for the training. I went to keep him company. I took my English paper piecing kit and worked on that during the class, and found that the class was more interesting than I thought it would be. The advanced class was pretty technical, so I was glad I had something to keep my hands busy. I noticed that a couple of women there were knitting too. And while I didn't go there to learn to be a storm spotter, I think I picked up enough to be able to know when a cloud over my house is going to be dangerous. Maybe.

I wish I could say I've been doing great with my goals of getting the house decluttered and projects finished, but I feel I've been idling lately. Last Sunday, we went out for an afternoon drive and after an hour or so, I could see why the doctor said to limit driving. Just being a passenger was tiring on my eye. But it has been getting better, and eye drops help the dryness (a common result of laser surgery), and I'm adapting to the black spot and the blurry spot. Funny how the eye can do that, kind of like not seeing the nose even though it's sticking out there.

At my one week followup, the doctor said the laser repair looked good and that it probably wouldn't tear again. I reminded him of all the thin spots he had counted the previous week and asked him if everyone had that many. His answer was no, that most people don't have many and that I'm above average.

I've always wished I could be above average in something. I think I should have been more specific.

By Marti at 07 February 2 comments: