And On It Goes

Have you ever had one of those what-have-I-gotten-myself-into moments when you don't really want to go forward with a project but there's no going back? That's what is happening with this kitchen project.

I had planned on redoing the kitchen at some point, that point being well after the dust had settled on the dining room addition. But then the mold growing out of the cabinet changed everything. So then the plan was just to get that cabinet out, chop off the molded parts, rebuild it, put it back in, refinish the cabinets on that side of the kitchen, and put everything in a holding pattern until after the dining room.

Years of a wet towel hanging on the end of the upper cabinet by the sink had caused some damage on that end. I thought of just filling the veneer that had split, and trying to faux the grain, and go on. But I had another upper cabinet with an end that was perfect, so I decided to switch those out.

Sounds so easy to say just switch those out, doesn't it? It's not. But after a lot of blood (well, not a lot of blood, maybe one splinter), sweat (lots of sweat), and tears (we won't go there), they're both down, the good one has been stripped and refinished, and ready to go up.

Not so fast. There's a new problem. Since the cabinets were both down, it seemed like a good time to remove the backsplash, and that's when I found mold behind the sink and dishwasher section. As I said in my last post, I was just going to cut out the sheetrock and replace it. But there's a problem there too because the mold goes down at least to the countertop, and with my luck, below it. Even cutting the sheetrock at counter level, there's not enough room to tape the joints (code).

Hubby and I considered our options and decided we might as well take off the whole countertop and sink, and replace it now. Now, when we need to be putting all our budget and effort into the dining room.

I had always planned on putting laminate back up. It's cheap and fairly maintenance free. I know granite is The Thing, but I didn't want to sink money into something that is popular this year and have to replace it in ten years when and if we finally decide to sell, and heaven forbid, granite is dated. But that was before the mold behind the cabinet, caused in part because the cast iron sink has such a high lip on it that it makes a trough between the back of the sink and the backsplash. A trough with a leak.

After some research, I decided Corian or solid surface would probably work, and Hubby and I headed out to look at some. But we didn't like it very well in person. We looked briefly at granite, but we really just don't have the time to go around searching for the right slab, and quite frankly, I don't want to take care of granite. Then we saw a quartz counter. I had seen quartz on tv and in magazines and it looked like the Torginol of countertops. But there were a couple of samples there we really liked. We also liked that quartz never has to be sealed, and the turn around isn't too bad.

Or, we could just cover the sheetrock with a piece of masonite and live with it until the dining room is done. Decisions, decisions.

btw, I found this great quote that applies to anything, but seems really appropriate to diy remodeling:

"Hard work has a future payoff. Laziness pays off now."

Kitchen Progress, One Step Forward and Two Steps Back 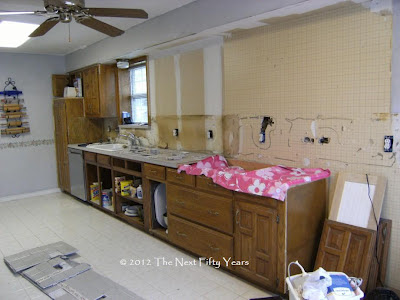 Progress has been slow, both with Hubby's eye surgery and then mom's knee replacement surgery. But I got back to it this morning and ripped off the tile backsplash, only to find more mold behind the kitchen sink. 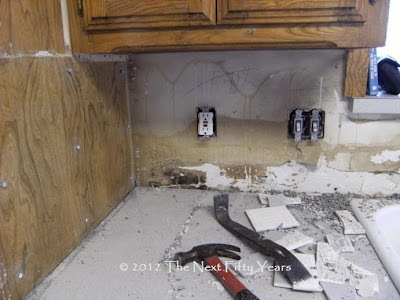 So instead of working on cabinets next, I'll be replacing sheetrock.