This is our first rain since June. If I wasn't dressed to go pick up Lil at the airport, I'd be out dancing in it.

Now if you listen to the Dallas tv stations, they say our last rain was July 8, but they only report weather from one official location at DFW airport which is almost fifty miles from us.

Speaking of rain, Lil likes to call and tell me when it is raining at her house in St. Louis. Last time we talked, she said she has only had to water her garden a couple of times this summer because it rains almost every week. That's when I hang up on her.

Blessings,
Marti
Posted by Marti at 7:22 AM 3 comments: Links to this post

Email ThisBlogThis!Share to TwitterShare to FacebookShare to Pinterest
Labels: My ordinary life

Caring For Your New Pet Armadillo

Congratulations on the arrival of your new pet armadillo. Here is a guide to help you give your amadillo a long and happy life.

A Safe and Comfortable Sleeping Space
Your amadillo will sleep all day and well into the evening, awakening in the night to eat and frolic in your yard. They value their solitude and prefer to be alone in the yard. This makes them a highly sought after pet by paranoid agoraphobic insomniacs who are up all night peering anxiously out their windows. 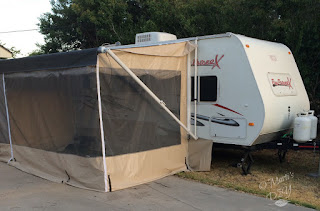 We are still learning about this little Fun Finder trailer. A happy surprise is that Hubby found a Dometic Patty O'Room in the outside storage compartment. Never used! That is both good and bad.

Good because it had no damage at all, and bad because it had to be customized to fit the camper. Hubby spent most of last Saturday doing that in 100+ temperatures. The awning that came with the camper is in pretty good shape we decided. It just has one spot where it has worn through and Hubby picked up a roll of awning tape at Camping World to fix that. 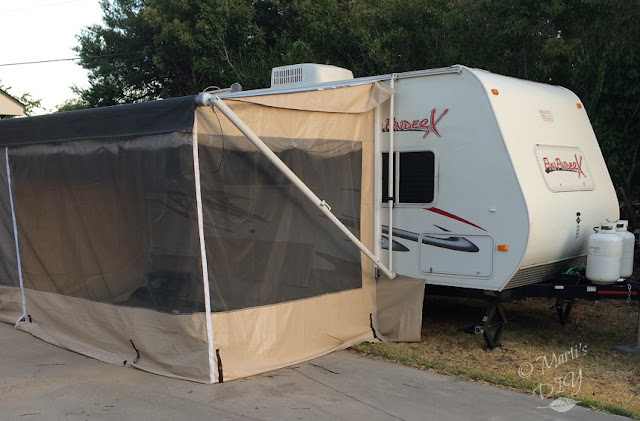 So that is the good surprise.

Another surprise, not so good, is that the refrigerator vent on the roof is broken. Apparently, the previous owners liked to drive under trees. Hubby didn't think it could be repaired but he got out the glue and managed to get it back together, at least temporarily. The refrigerator doesn't seem to keep a consistent temperature, fluctuating from 32 to 47 during the day, and I've read that a fan can help with that. Some people use a fan inside the fridge that run constantly and some hardwire fans outside the unit that only run at certain temperatures. We discussed those options and then while Hubby was looking for a replacement roof vent, he found a Camco RV refrigerator vent system with solar panel and fan and that looks like a solution to both problems.

Then we had another surprise, a bad surprise.

Remember the picture of the bedroom end of the camper? 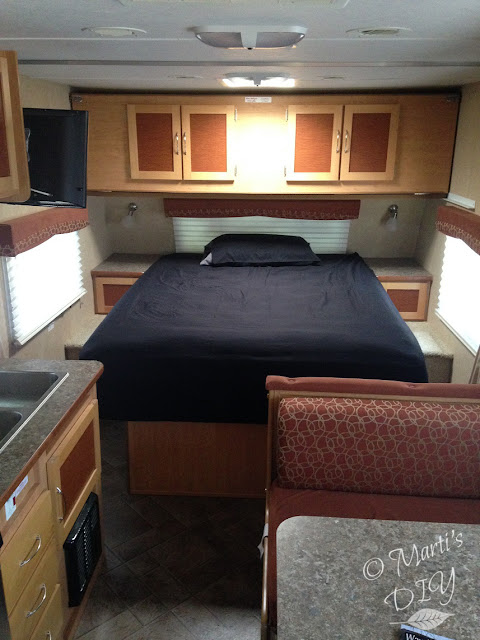 When we looked at the camper, I did think it was a little odd to have black sheets in a camper, just because they show every bit of dust, lint, and grass, and there is a lot of dust and grass in a camper. But each to his own, I thought. When we were doing our inspection, we pulled back the sheet to check the condition and look for signs of bedbugs, and it looked clean and even pretty new. What we didn't do, and what we should have done was pull the sheet completely off the mattress. But it is a little hard to reach the upper end of the bed because of the exterior storage compartment. The husband was in the camper with us when we pulled back the sheet and I'm sure he was inwardly cringing and then relieved when we didn't pull it back all the way. I bet they had a good laugh after we left with the trailer too.

Because just past the clean section we looked at, there was a huge blood stain. Hazmat huge. Ax-murdering Criminal Minds plot-line huge. The kind of stain that only a black sheet would cover.

While signing the paperwork, the wife told me they had only taken two trips in the trailer since they inherited it from his father.  She didn't mention that they had been kidnapped and held for ransom in the trailer, her husband shot while protecting their family, and she valiantly working to keep him alive in the bed until the ransom was paid.  Or that they were boondocking miles away from civilization and she stepped in a bear trap and lay bleeding and writhing on the bed while he drove the rutted roads at breakneck speeds to get her to the hospital.  Or that a cat, no, make that ten cats, gave birth on the bed, all at the same time.   Or even a more logical explanation.  None of that was mentioned.

Hubby managed to get the mattress out of the camper without having to remove the bench seat by the door, and then we started looking for a new mattress even though that was not in the budget. Thanks to a tip from my friend Missy who was a full time RVer for years, we got a 10 inch Night Therapy Elite Gel Infused Memory Foam Prestige Queen Mattress at Sam's Club for less than $400. Cheaper than anywhere around even with the membership fee, and it had great reviews. We slept on it last night and it is comfortable. We also bought a Serta Gel Memory Foam pillow at Sam's but neither of us like it. It's heavy and not very soft, kind of like sleeping on a bag of sand. So that was a waste of $25. But I hope it will be good for sitting against while reading in bed.

Here is the bedroom end of the camper with the new mattress and the overhead bunk (it looks like a cabinet over the bed) removed.  That bunk was just low enough to cause claustrophobia and a gash in the head when getting out of bed in the middle of the night.  We are outfitting this camper for two people.  If we ever have overnight guests, they can sleep on the dinette which makes into a bed.  Although we have talked about removing that too and putting in a couple of small, comfortable chairs. 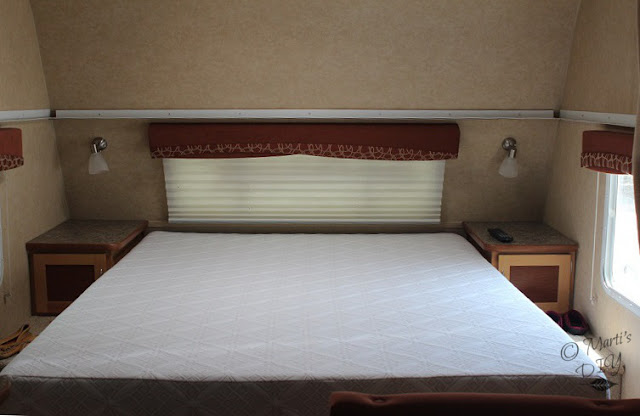 The day after we discovered the mattress, the previous owner wife called. The reason they gave for selling the camper was because they were buying a house. In fact, they were living with her parents until they closed on the house. So she called and said the loan company didn't like seeing that much cash going into their bank account and would we give them a cashier's check instead? She drove down with the cash and met me at our bank, and I'm sure she was wondering if we had uncovered the mattress yet. When I told her we had taken out the fold down bunk over the bed, she blushed and then didn't look at me again. Awkward!

With our rural trash service, we are allowed two bulk item pickups a year. So I called and scheduled a pickup, and we made sure the mattress was stain down when we put it out with the trash. But I was watching when it was picked up and they gathered around to look at the stain before putting it in the truck. So I'm sure they think WE are the ax murders now. Awkward again!

Outfitting a camper from scratch is a lot like setting up house for the first time. I never thought I'd get tired of shopping, but I've found I've really gotten tired of spending money. I've also gotten tired of returning things that didn't work out in the camper, or just didn't work - as in broken or missing parts. Other than food and clothes, and the ocassional household item, I haven't bought a lot of things in the last few years. I've more than made up for that this week, and at least a third of the things are defective or missing parts.

Hubby ordered a Weight Distribution Hitch on the same day I ordered a Sunpentown 2.1 cubic foot freezer, both from Amazon. Hubby's hitch came in four days, albeit with a missing part. My freezer has yet to be shipped. The delivery date ranges from August 14 through August 19. I called Amazon customer service to see if there was a reason it hasn't been shipped yet and the guy in India just repeated what it says on my Amazon tracking, that the order is being processed and will arrive on time. I am not holding my breath. Meanwhile, Hubby contacted the seller of his hitch and told them the package was damaged and a piece missing, and they immediately sent back an email saying they were sending another and a pickup label for this one. Now that is customer service.

I'm sure there will be more surprises, some good and some bad, but maybe these are the extremes and everything else will fall into the category of usual maintenance. We hope.

First Modifications to the Trailer

The very first thing we (that's the royal "we" - Hubby might argue that he did all the work on the bunk) did was take down the folding bunk over the head of the bed.

Next, we removed the little side cabinets next to the bed. I couldn't find a drawer that would fit inside them, and they were much too deep to be of use. Anything put in there rolled to the back out of arm's reach.
Then we removed the carpet over the sides of the bed platform. This is actually the top of the storage compartment which is accessed from the outside. The carpet served no useful purpose and was dirty at the bottom from, probably from years of pushing a dirty mop against it. 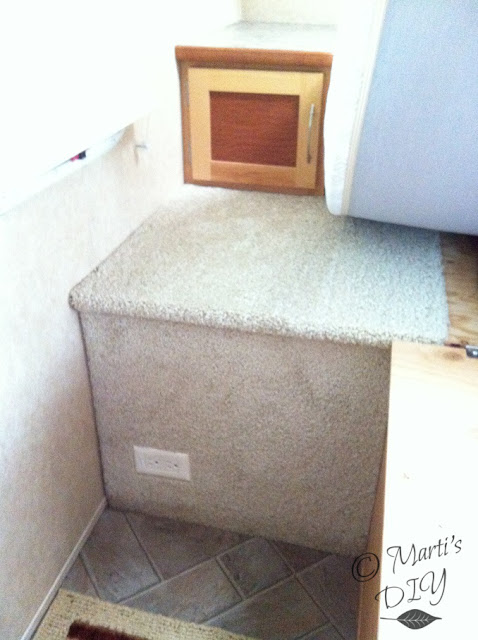 Posted by Marti at 7:05 PM 2 comments: Links to this post 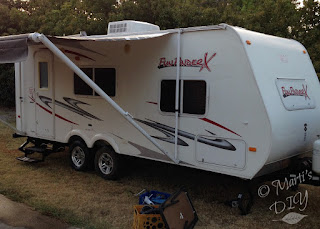 New to us anyway.

After our last trip, we began seriously talking about getting a camper. Our only requirements were that Hubby can stand upright (he's 6'4"), a full bath, a full queen bed, and enough of a kitchen to make sandwiches and heat frozen dinners, and all in the smallest and lightest possible trailer. 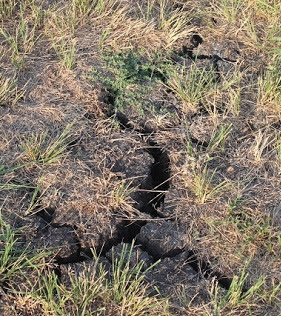 No rain since June, and very dry.