Buddy, aka the Cat

Last week Hubby spotted a little dog in our front yard. It was wearing a blue sweater and appeared to be lost. I opened the door, called to it, and he came trotting over. After giving Hubby the phone number on his collar, I took him to the garage so I could dry his feet. The garage is cat territory, and Buddy was not a happy cat with a dog in there. To pacify Buddy and to keep the dog out of mischief, I put him in the hallway between the bathroom and office where he settled down on the bathmat.

Before leaving the main part of the garage, the dog made the mistake of checking out the cat food dish. Buddy arched his back, stalked around the table saw, and peered around the corner to watch the little dog. After the dog was sequestered in the hall, Buddy resumed his position on his window perch. When I tried to pet him, he swung his head around as if to bite my hand. He did not want me to pet him. This is a cat who lives for petting and food. He was not a happy cat.

When the friend came to claim the dog, I made sure Buddy saw the dog leave. It took awhile for Buddy to lose the attitude and let me pet him. Later that night, Hubby and I were in the office when Buddy walked in. He must have gotten a scent of dog because he stiffened, stalked over to the bath mat, sniffed it, and then stalked out.

All this over a dog who was only here for an hour. Lil and her husband are bringing their new puppy here over Christmas and Tali gets to stay in the house! I don't know if Buddy will try to pounce on the little dog or stalk around in a foul mood for a week.

This is Lil's dog.
I'm trying to get Buddy ready for Tali's visit; I bought a little stuffed toy dog and every time Buddy comes in the house, I make the toy jump around, tug on Buddy's tail, and just generally annoy him. When Buddy ignores it, I tell him what a good boy he is. But when Buddy has finally had enough and wants to bite, I tell him no and give him the choice of his bed or the door. Too bad the toy doesn't smell like Tali. 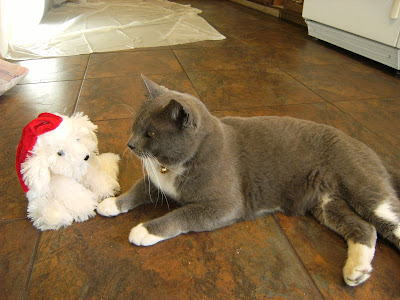 I still think Buddy will be in a foul mood during Tali's visit.

By Marti at 29 November 7 comments:

For the last 16 years I have had tile in the kitchen. It didn't bother me at first, but the last few years my feet suffer after a day in the kitchen. So I've been looking at anti-stress mats. There are long ones, short ones, narrow ones, and wide ones. And all ugly. I would want one in front of the sink, and the stove, and the baking center beside the stove. But I wouldn't want them there all the time, because they are ugly. But I'd have to leave them there all the time because I don't have anywhere to store them. Wouldn't it be easier if someone invented shoe shaped anti-stress pads that attached to the bottom of shoes?

By Marti at 27 November 5 comments:

Houston, We Have Kitchen.

I hope everyone had a wonderful Thanksgiving. If not wonderful, at least nice. Ours fell into the nice category. We spent the morning working on odds and ends so we could get our appliances back in the kitchen, and then we went to my mother-in-law's for lunch.

I haven't been posting every step of the way with the kitchen because it got so tedius with the dining room addition (and it's still not finished either). We got countertops mid October, and our floor tile was laid last Monday. The only hitch is that there is a haze on the tile and some of the grout lines turned white (efflorescence) and the guy is coming back today to look it over.

Hubby and I spent a couple of weeks getting the old tile and thinset off the floor, then filling the brick ledge between addition slab and getting it smooth, filling other low spots, and putting Redgard over all. It was back breaking and after all that, we wanted the tile to be perfect. And we don't lay tile perfectly. This guy wasn't perfect, but he still did a better job getting it flat than we could have done. The only thing we could have done better was vary the tile so there weren't 2 and 3 in a row of the same pattern, and the grout. I know I could have done a better job with the grout. When I saw the streaky haze over it, I was just sick. But an online search (I love the internet) showed that it can be removed with a vinegar and water solution or a commercial product. I mixed some vinegar and water and it seems to take off the haze, but doesn't do anything for the efflorescence on the grout.

So now it's back to the vinegar and water for me, and more surfing for you. Have a good day!

I Found a Dead Body in the Garage!

I guess the cat is earning his keep. Can't figure out why he didn't eat the mouse though, so I had to create a diversion to keep him away from it so I could scoop it up and put it in the trash. For some reason he likes to bring his prizes to one spot in the garage.

I thought with two bells on his collar that he wouldn't be able to sneak up on anything, but I guess he is really quiet when in stealth mode.

By the way, we finally gave him an official name. It's Buddy, though he still comes to anything, especially if it involves food.

Today I'm going to try to take him to the vet for his annual shots. Lil doesn't want her puppy to catch anything from the cat when they come for Christmas. Not that the cat will want to have anything to do with her dog I'm sure.

The above was written before our vet adventure. Here's how it went.

I bought a new pet carrier hoping the cat would go into one that didn't have the smell of other animals on it. That was wishful thinking. Even with a rug over it hiding the door, he wouldn't go near it. I put his favorite treats in it and still no luck. I tried to put him in but my two arms against his four sets of claws just didn't have a chance.

So I went to the vet and got a sedative, and just like last time, I crushed it and mixed it with a few drops of milk. At first he was curious about the bowl and licked the pink milk. But it must be bitter and he walked away. So then I started the process of dipping my finger in the mixture, wiping it on his feet, waiting for him to lick it off, and then wiping on more. It took about thirty minutes for him to lick enough to start getting woozy. When he couldn't walk a straight line, I picked up his front end and Hubby pushed his back end, and we got all but his tail in the crate. By then he was snarling a little and fighting with everything he had left. It's amazing how an adrenalin rush can energize a drugged cat.

He meowed a pitiful, drunk meow all the way to the vet's office, but once inside, he was meek as a lamb. When I picked up the sedative, I told the vet how difficult he was, and there he was being totally submissive and making a liar out of me.

Now we're home, and he is sleeping off the sedative in the office. We tried letting him loose in the garage, but decided it was too dangerous in his condition. 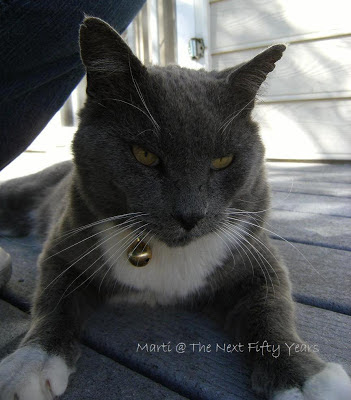 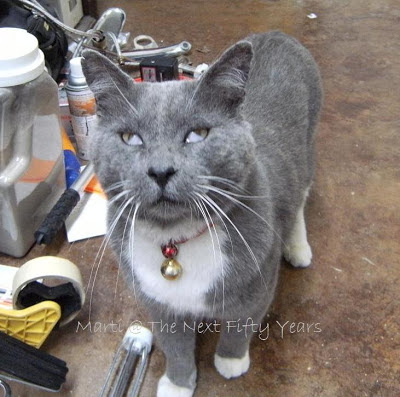 By Marti at 07 November 6 comments:

It's Hard to Get Back in the Swing of Things

It seems like ages since I have even thought of making a blog entry.  A good friend called and asked me when I was going to start blogging again, and another asked if I had quit.  My daughter asked me to at least post some pictures so she could see how we were coming along with the house.  There were times I composed a blog post in my mind as I was working on something, but when I sat down at the computer, I just didn't have it in me to write it out, or I forgot what I was going to say, or I hadn't taken a picture.  All feeble excuses I know, but that's all I've got.

Since I last posted, we lost Pawpaw and Brownie moved back to Oklahoma. More about Pawpaw later.  It was not unexpected that he would die, just not the way it did.  The first few weeks after that were full as we dealt with a few things with Deedee.

There have been some changes on blogger since I last posted too I see. I'm not crazy about them, but I guess I can adjust. I've still been online, but most of my time is spent working on the kitchen or looking up ways to work on the kitchen.

And the work on the kitchen continues at a snail's pace. The cabinets are almost finished, the countertop is in, and next we begin tiling the floors in both dining room and kitchen. Then ceilings in both rooms, and hopefully we'll be able to have Christmas dinner in the dining room.

We were going to have someone do the tile, but none of the three tile layers who came out planned to do anything about the joint between the new slab and old slab, except to just tile over it. The last guy told me the thing to do is just pour a layer of self leveling cement from one end of the dining room to the other end of the kitchen, raising one end over an inch. When I questioned how the dishwasher would fit back in it's slot if the floor was raised that much, he scratched his head and said "well, we won't pour under it then, just in front of it." Of course then the dishwasher wouldn't be able to come out. Ay yi yi. That's when I decided we would  just do it ourselves.

By Marti at 03 November 6 comments: