Bar-B-Que Places Have the Funniest Signs 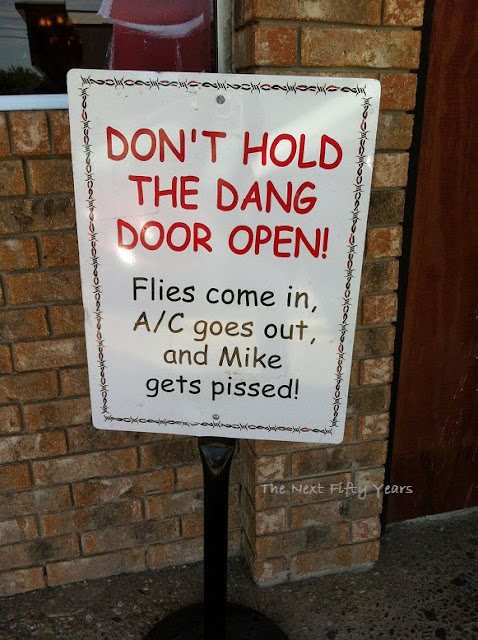 By Marti at 18 November 4 comments:

First Snow of the Season

It wasn't much, just a thin layer and is mostly gone this morning. And finally, finally, finally, the wind has quit blowing. It would be the perfect day to spray paint something outside if it weren't so cold.

I didn't get a lot done this weekend even though Hubby was out hunting and I had the whole weekend to myself. Well, I take that back. I made a couple of fall topiaries for the front porch. 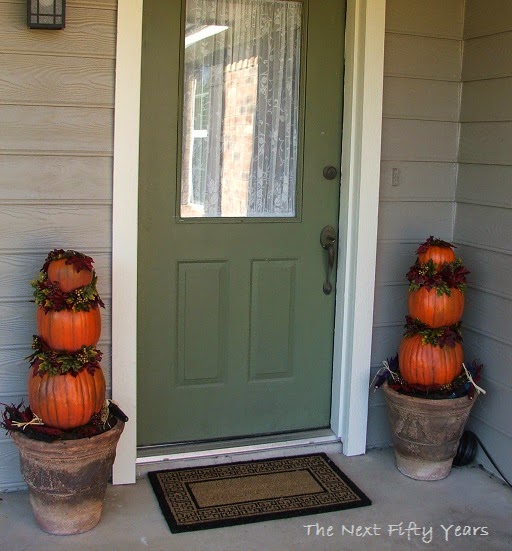 I thought they looked pretty good until Hubby saw them and said they looked like orange snowmen. Hmpff! Men!

Looks like those pots could use a coat of paint, but the weather is going to have to warm up a bit first.

By Marti at 17 November 6 comments:

Saturday, the German army seized control of the train depot and we witnessed a heated battle between the German and Allied armies. 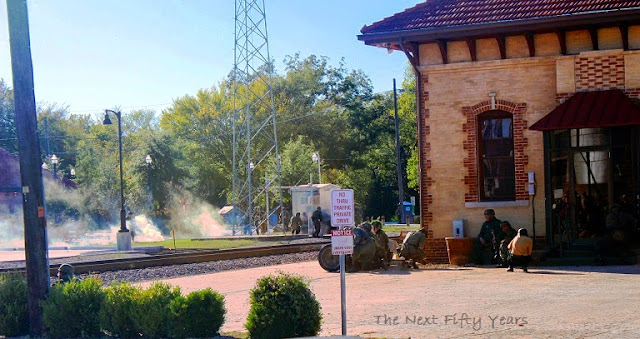 Then, an unsuspecting train came through and a temporary cease fire was called. 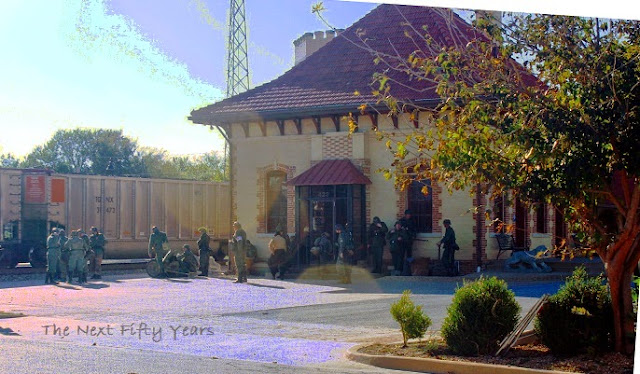 It was a really long train, and some of the Germans came over to talk to the crowd. 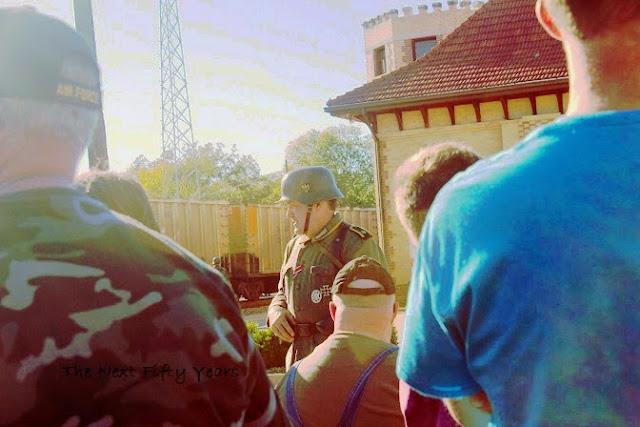 As the end of the train neared, the troops began getting back into position.

Then the battle resumed. 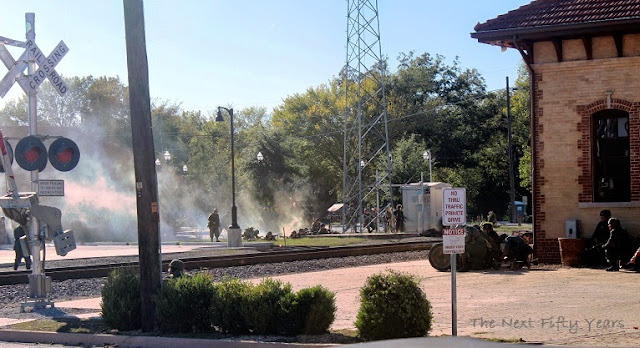 The Allied Forces broke the German line and all German survivors surrendered. 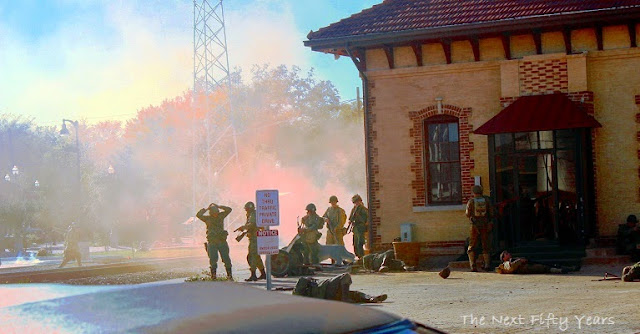 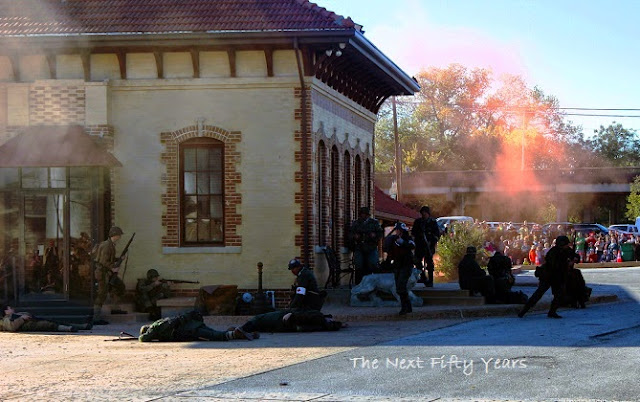 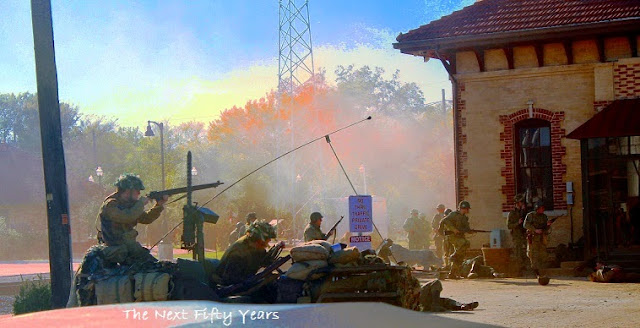 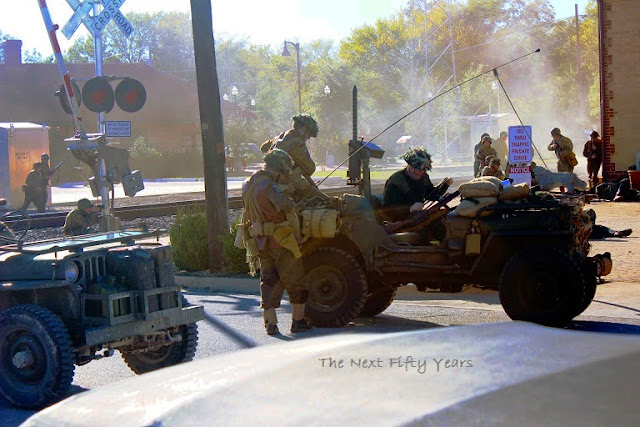 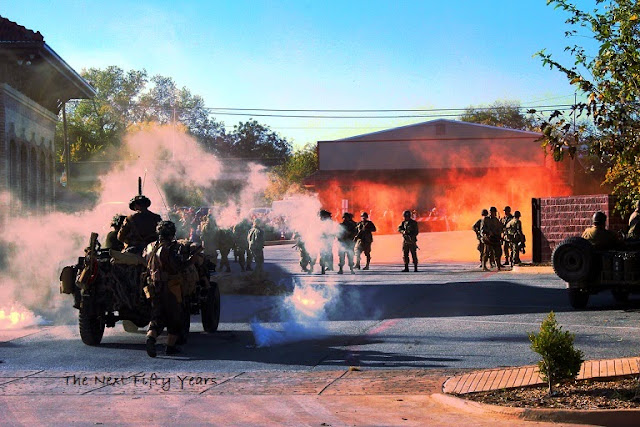 This World War II reenactment has been taking place in Waxahachie for many years, but this was the first year we had heard about it. Not very well advertised I guess. The participants gather into camps Friday night and spend the weekend living history.

Along with the reenactment, there were vintage cars and motorcycles, like this one. 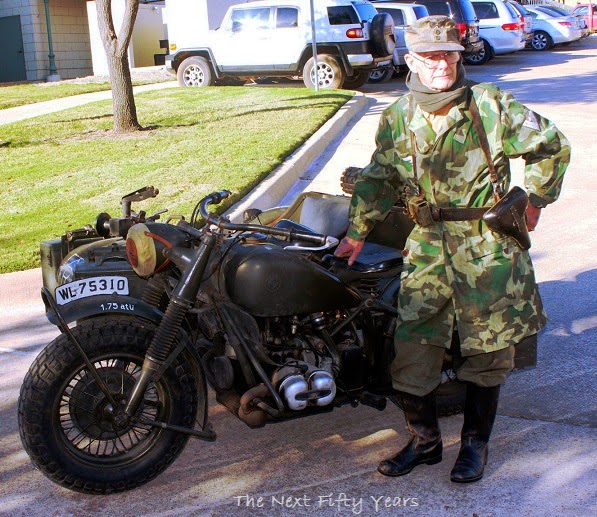 Earlier Saturday morning, there was a ceremony at the civic center honoring veterans. We went because a high school classmate was playing in a swing band during the ceremony. 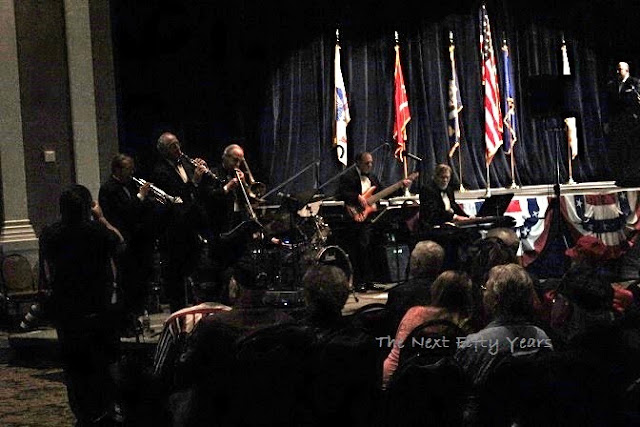 By Marti at 10 November 3 comments:

After that last grousing post, I thought I'd show this really neat building in San Francisco and the sidewalk beside it. It's the Vesuvio Cafe, a landmark saloon established in 1948. We didn't visit it, but watched people coming and going from the restaurant across the street. Looked like a hopping place. 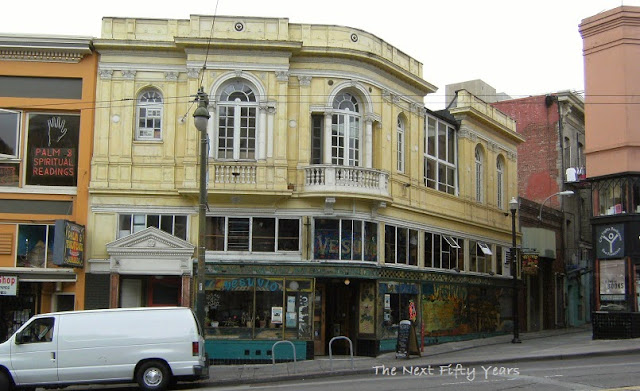 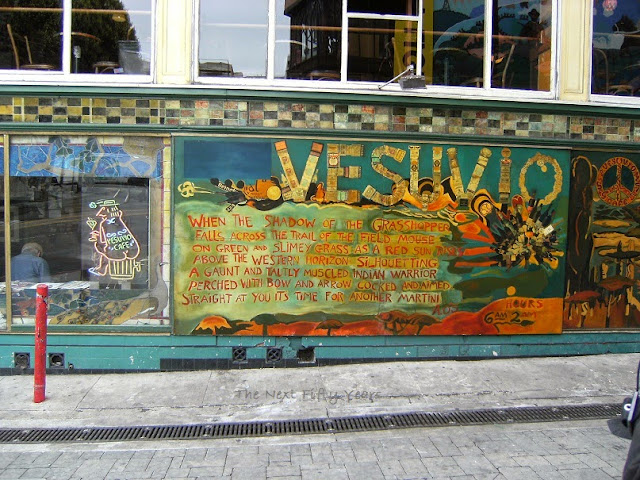 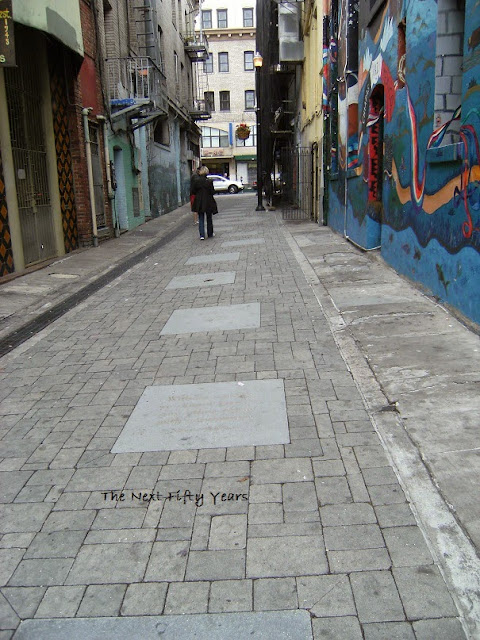 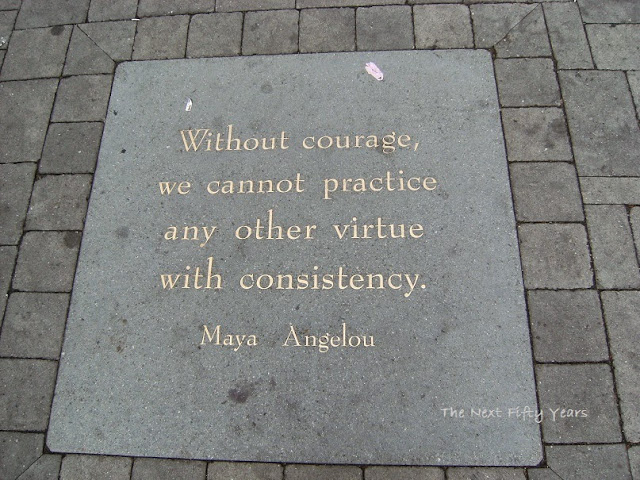 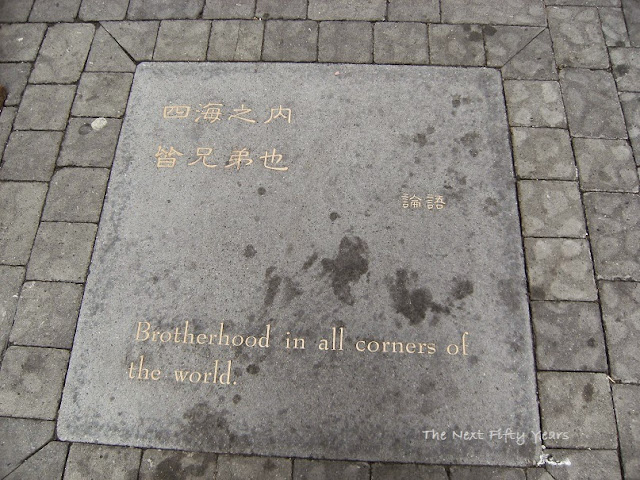 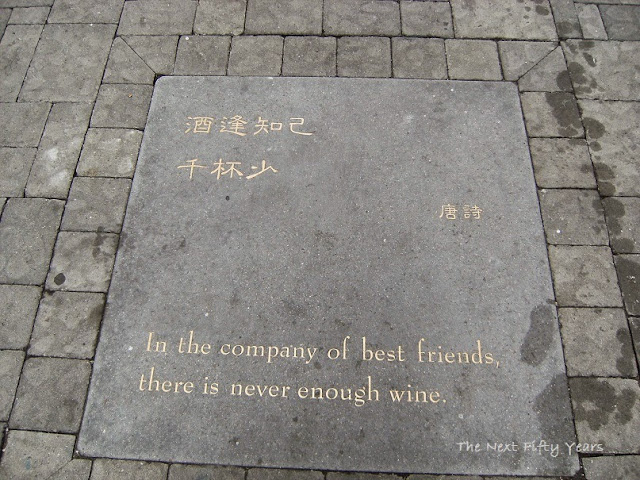 And right there, in an apartment over a business, someone was drying their laundry. Maybe that's where the term, 'airing dirty laundry' came from. lol 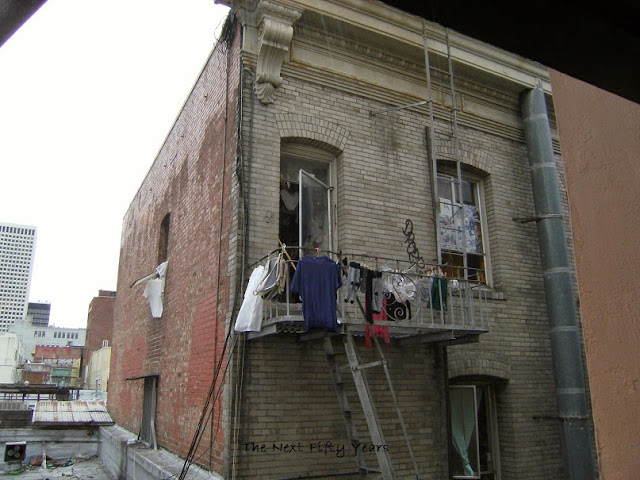 By Marti at 02 November 5 comments:

Another Day, Another Diet

I called my doctor's office October 21, and after relaying through his nurse through several calls, he decided the BRAT diet was the best way to control my headaches and the resulting tummy problems. I had talked to him once before about having candida and he pooh-poohed it just like every other doctor I've ever been to, so I didn't argue with him this time when he said candida doesn't cause digestive problems. I should have. I really should have.

It took a week and a dose of Imodium before I was functioning normally, or as normal as anyone could function eating only rice, bananas, and applesauce. And on the upside, I've lost eight pounds. On the 31st, I added steamed carrots and was happy to wake up Saturday morning without a headache. That was especially good since I went to a garden swap in Fort Worth that lasted several hours. (I got a century plant and a couple of Manfreda plants among others. Very cool.) After my usual breakfast of rice and lunch of banana and applesauce, I was pretty pumped about eating carrots with my rice again for dinner. I know. What a sad life when carrots are a thrill. Then, for a reason that escaped me afterward, I added soy sauce to the mix. By bedtime, I had a headache, couldn't shake it all night, and this morning I was at the sick tummy stage.

It didn't last more than an hour, so I still had time to get to church. I haven't been there in three weeks, two of them because I was sick. Everyone said I looked good... better than ever.... very healthy. That's good I guess, but it annoys me that I look better when I don't feel good rather than when I do. That's one thing I've noticed a lot over the years, and I'm sure people with other invisible illnesses see also, that unless our eyes are sunken into our shriveled faces, no one believes us when we say we aren't well.

All that to say that I am tossing the BRAT diet and going back to the Candida diet. In the middle of the week, I wondered why the diet, especially the bananas and applesauce wasn't bothering me. I had noticed some of the symptoms of Candida overgrowth, but nothing like this morning. My doctor won't like this, and I don't think I'm going to tell him. A lie of omission. But I've decided to follow my instinct, which says this is a Candida issue, not just an allergy issue. There may very well be an allergy issue, or gluten intolerance, but if that were the case, the BRAT diet wouldn't have caused today's problems.

Usually, starting the Candida diet makes me feel very deprived, but two weeks of BRAT will make the Candida diet feel like a feast. I've already enjoyed a meal of fried eggs and rutabaga. It was.... interesting.

By Marti at 02 November 6 comments: