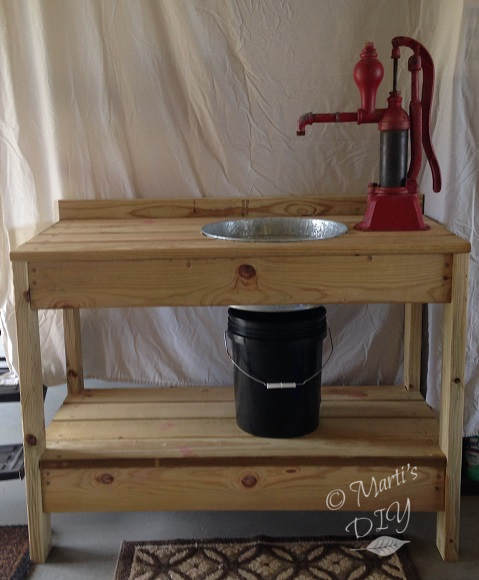 When I first thought of this idea, I planned on doing a tutorial, but then I found that someone (or several someones) not only had the idea before me (Rats!), but had already done tutorials.  So I won't waste your time with another one.

Crafty Staci has one on how to put the drain in the tub.


Be sure to read all the comments for more detail.  I used a 17 inch round tub where she used a 22 inch oval tub and because of that, I had to use a smaller strainer.  I found a 3 inch bar sink strainer at Lowes.  The larger kitchen sink strainer overlapped the rounded ribs of the tub and would have been difficult to seal.  I got the tub at Tractor Supply but I noticed that Home Depot also has a similar tub.

There are also hundreds of tutorials on building the sink table. I found one similar to the one I made at Ryobi Tools but it was really an Ana White plan. The differences between hers and mine is that I didn't make a tall back (a 2x4 just fit the gap after the last deck board and made a nice backsplash) and didn't put the bracing on the back. I built my back just like the front.  And I had to add two support boards (identical to the side aprons but 2x2 instead of 2x4) on either side of the sink. I also made mine wider (it's 48 inches) and it is about an inch deeper.


So while I won't waste your time with another tutorial, what I will do for those who might want to make one of these someday is to show you some of my oops moments so you can avoid making them.

1.  Drilling the hole in the tub.  That is the scary part, and for good reason.  When I bought the strainer and told the plumbing department man what I was going to do, he said I needed a 1-3/4 inch hole saw for metal.  Not true.  After Hubby made the second hole with me holding the tub to keep it from spinning with the drill, I attempted to insert the strainer and found that it was about a quarter inch too small so I had to use a metal file to enlarge the hole.  What's a hole saw, you ask? This.  It fits on a drill. 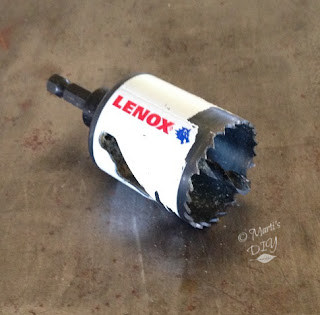 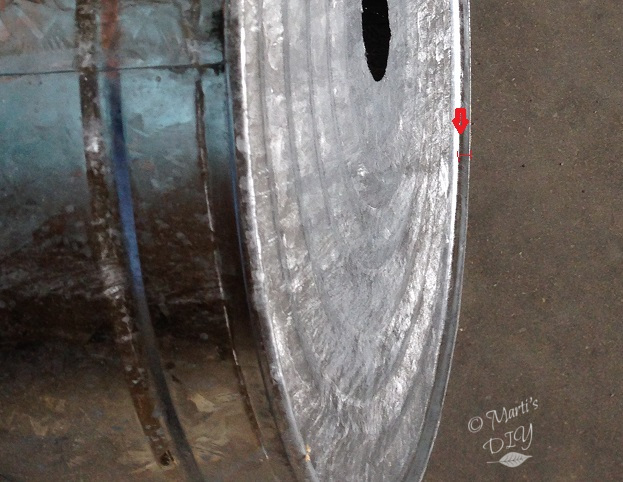 With my first attempt, I didn't do that, and after the bit cut through the final metal, it bounced, spun the tub, and made a jagged cut.  Rats again! 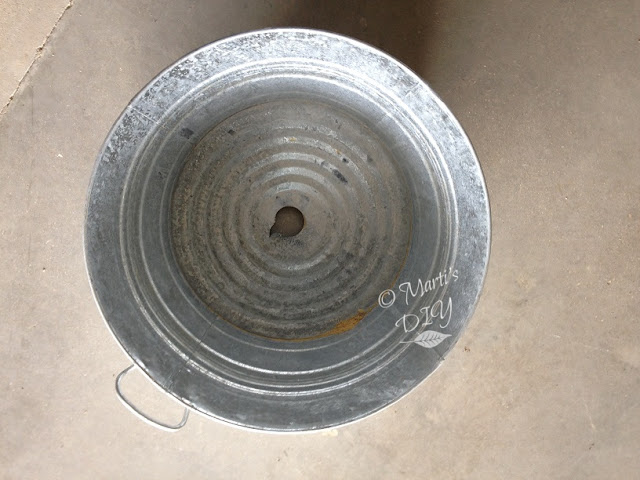 2.  Draining the sink.  Notice in Staci's picture that her tub has a flat bottom.  Mine has round, corrugated ridges, and those ridges keep the water from completely draining from the tub.  What I wish I had done was to pound the entire bottom of the tub so it had a concave shape.  If it really bugs me, I might try to go back and do that.  I put some suds in the sink so you can see how much doesn't drain completely. 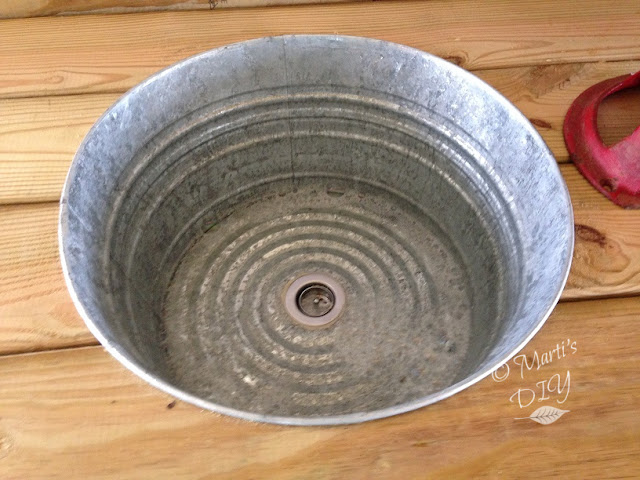 3.  Drain pipe or not?  The man in the plumbing department also told me I needed a drain pipe attached to the strainer or the water would splatter into my bucket.  But that isn't true the way I built the table.  I use a five gallon bucket which just fits under the sink.  If I had a drain pipe, I wouldn't be able to get the bucket under the sink at all.

4.  Attaching the tub.  When I was trying to design this table, I thought I would just put the tub on a shelf under the counter.  But when I began building, I could see that that would make the table way too heavy and it would actually be in the way.  So I took a cue from my kitchen sink and attached straps to the 2x2s on either side of the sink.  Somewhere around here is some metal strapping, but it's probably packed in box under twenty other boxes, so I had to improvise.  I used the plastic strapping that held our lumber delivery together.  In this picture, I just have one strap on.  When finished, I had two straps, crossed under the sink.  When I find the metal strapping, I will change it out. 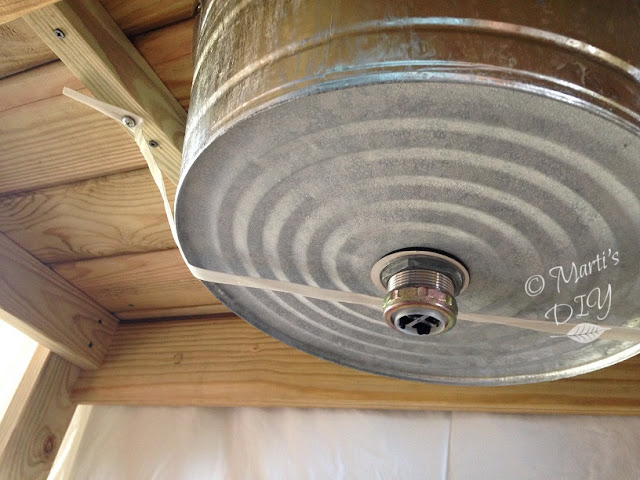 5.  Plan ahead.  Goes without saying, right?  Well I had this bright idea to hide my screws with wood plugs.  After I had the plugs glued in, I realized that we haven't found the sander yet.  Packed in one of those piles of boxes still in storage probably.  So, someday, when I find the sander, I'll sand off all those plugs.

I called this an outdoor sink table in my title, and someday it will be outside.  For now, it's beside my travel trailer to give me a big tub for washing dishes.  If you have ever washed a casserole dish in a tiny travel trailer sink, you know why I wanted a bigger sink.  I am not using the hand pump right now, but later, when the sink is outside, I'll put a bucket of water under it so kids can pump water.  This is a cistern pump that was handed down to us from Hubby's parents.  My kids loved pumping water when they were little and I hope it can be enjoyed again here.  You may remember it being in my galvanized tank pond at our last house. 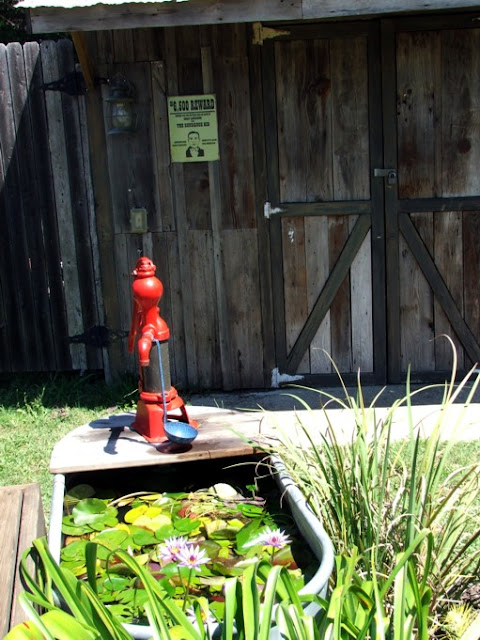 In Case You Were Wondering, I'm Still Here

The building is progressing slowly. Very slowly. We have just about finished framing in the barn, and are living out here in our trailer. Not ideal, and I have had a meltdown, but we'll make it. Hubby started building the stairs to the attic last night so I won't have to risk life and limb climbing the ladder in order to get up here to use the computer. Once we get real internet instead of this hotspot, I hope to start posting again regularly.

Several weeks ago I decided it was time to move the galvanized stock tank pond down to the barn.  It was stuck off in the trees to keep it out of the way while they were building the barn, and I want it in place before they start backfilling around the barn.

After I got it in place and leveled, or as level as a slightly bowed metal tank can get, I decided to climb inside it to clean it before adding water.  That was easy, but when climbing out, I must have forgotten that I'm not as young as I used to be, and couldn't quite lift my left leg high enough to clear the rim.  My foot hung on the rim but the rest of me kept going over and I hit my right side on top of the rim before hitting the ground.  At first I thought I had broken ribs, but looks like I just cracked one or two.

Needless to say, I haven't been lifting too much unless I absolutely had to.  I'm almost 100% again and will try to remember my age in future projects.