Since I probably won't have time to get online tomorrow, I wanted to wish everyone a Merry Christmas today. 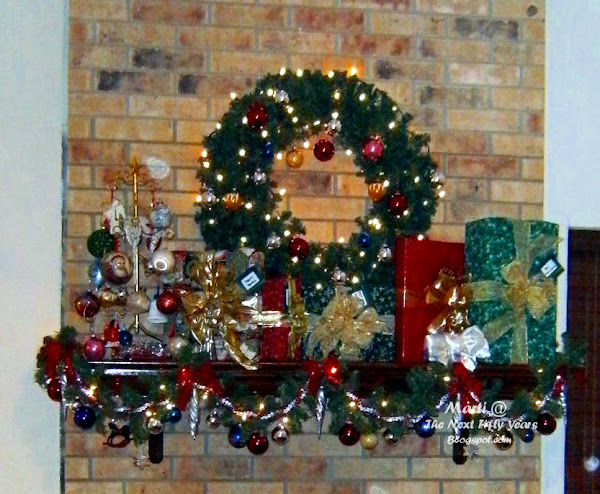 Thanks to Older and Wisor, I figured out how to have the bling (I know, I can't believe I said that either) of a Christmas tree without the hassle of putting up a Christmas tree.

If you've read my blog long, you know I hate greeting cards of any kind, Christmas, birthday, etc. It's the expense of buying a card, sending it, just so someone can look at it and throw it away. Same with gift wrap and ribbon, plus the added chance of throwing away part of a Christmas gift. The fabric wrap and wire ribbon can be reused every year. Reuse, Recycle - part of the three R's. I love it. 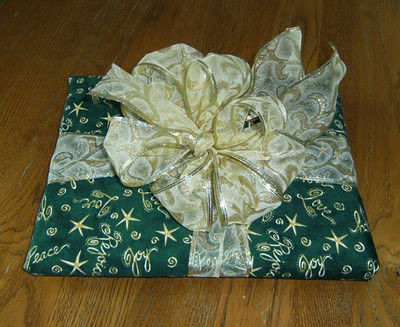 By Marti at 24 December 8 comments:

Pawpaw Has a Roommate

Pawpaw has been at the nursing home for almost four months and except for a day or two, has had a room to himself. But a few days ago, another man moved into the nursing home, and into Pawpaw's room. The man has Alzheimer's and it is pretty advanced. He used to be a Baptist preacher, so they should be fairly compatible. There's just one teeny little problem. The Rev doesn't want to be at the nursing home.

The first day, his daughter brought him into the room, unpacked his bag, and settled him into the room. Then she left to go fill out some paperwork and go home to her ten kids. Yes, ten, and she is the only relative within fifty miles. After she left, Rev pulled all his things out of the drawers and closets, loaded them into a laundry basket, and headed out the door. A nurse brought him back and unpacked his basket. He told her she might as well leave everything in the basket because he wasn't staying.

Mother-in-law and Pawpaw were sitting on his side of the room watching, and after the nurse left, Rev began packing his basket again. Mother-in-law told him he might as well spend the night since it was getting dark outside and too late to go home. He said, no, he was going home, picked up his basket, and left. Pretty soon an aide brought him back again, and unpacked his basket. They went through this routine at least five times, and it was entertaining enough that Pawpaw stayed awake longer than usual.

The next morning, Hubby visited Pawpaw and said he walked into the room to find the Rev sitting in his bed crying into his breakfast, and Pawpaw already in the dining hall. After breakfast, Hubby and Pawpaw returned to the room and the Rev was lying in bed sobbing into his pillow. Hubby suggested they go for a walk and Pawpaw agreed, so they walked until Pawpaw needed to go to sleep. The Rev was still sobbing when they got back to the room, but Pawpaw dropped off to sleep and Hubby left.

I haven't heard how it has gone today, but I hope the Rev settles in and becomes good company for Pawpaw.

By Marti at 10 December 4 comments:

After using most of the fence pickets on the faux fence, I still have a lot of rails and fence posts. So I cut a few posts into sections and Brownie and I made post people carolers. 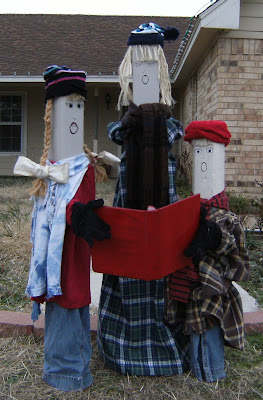 Since my posts were in a very used condition, I couldn't paint them like typical post people. They had to be dressed to cover the dark stains and splintered wood. I just painted a little section on top to make a face. I began giving each post two arms but found that it worked better with the outside post people having one arm each. They also wore a shirt to cover the arm. One shirt bought at the thrift store and one from the box of old clothes we were about to take to the thrift store. 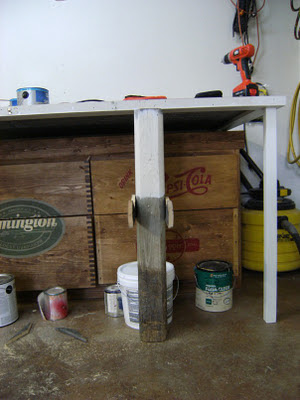 The post on the inside is wearing a curtain panel from the thrift store, strategically stapled to look like a dress. And they all have hair made from the sisal rope the cat refused to touch.

Then we screwed a couple of conduit clamps onto the back, drove a piece of rebar into the ground and slid the post people onto them. To complete the look, I spray painted an old notebook, and wired it onto the two outstretched arms.

Cheap, easy, and fun. However, no one seems to like them except Brownie and me. That's ok. Now I have Christmas yard art to put in front of the "General Store". (Although right now they're in the front yard.)

By Marti at 09 December

An Update of Sorts

I started to title this post "Stupid Things I've Done Lately" but some of this wasn't my stupid stuff.

To begin with, I lost my new password for blogger and have been locked out for awhile. Before Thanksgiving, I was visiting blogs that had linked up to some blog parties, and on one of them, a wordpress blog, there was a popup that said something about verifying my password, and there wasn't any way to close it except to put my password in and click ok. So I closed the browser instead. I opened a new browser and went back, and the same thing happened. So I closed the browser again and immediately changed my blogger password, just in case.

I jotted down the new password on a scrap of paper by the computer, and I thought I picked a new set of security questions. I always make up bogus answers for those security questions and keep a list of passwords and answers. But I never got around to writing this one on the list.

Then I did a clean sweep before Thanksgiving and moved my pile of papers and assorted clutter to a back corner of my room. After Thanksgiving, I couldn't find the password anywhere. I clicked on the link to recover password, but without the answer to my security question, I thought I could be permanently locked out, so I didn't try it. I finally did it this morning, and there was nothing about a security question. Whew! But it looks like I am going to have to find my phone number now. I know it's written down somewhere.

About that phone number. I have a new number on my cell phone. We dropped land lines years ago and seldom regret it. When Hubby got a cell phone for work, I took over his phone plan, and his phone number. The only drawback was that the area code was not the same as the one where we live, so very few people called me back when I left a message. I switched to a new number to get a local area code. AT&T assured me that the number had been cleared and I wouldn't be getting calls for the previous owner. Wrong! I haven't gotten any personal calls for the previous owner, but I have gotten plenty of calls from bill collectors. Apparently, the previous owner had a lot of bad debt.

I changed my message to something like "This is Marti's new phone number. Leave your name and number and if I know who you are, I'll call you back." The bill collectors never leave a message, but I could tell who they were by the missed calls and most of them must have listened to the message and figured out that their debtor had changed their number (probably to avoid those calls). Then, a couple of weeks ago, another creditor started calling, Nationwide Credit. After a few missed calls from that number, I looked to see who it was, and put it into the phone's address book. Evidently the Nationwide collectors aren't as bright as the other creditors, or they thought it would be just as easy to get some money out of me as the person with the debt, because my message went unheeded and they kept calling every day.

I decided to answer the next time they called, ask them who they were calling, tell them that person changed their number, and to STOP calling ME. They call between 8am and 10am every morning, so you'd think that would be fairly simple, even for me. But one day I couldn't get to the phone in time, another day I was in the car and couldn't answer the phone with my gloves on, and another day my battery died as I tried to answer. But today I finally got to answer. I didn't start with hello, just "Who are you calling, please?" And on the other end of the line, nothing. I repeated my question and they hung up.

So I took the bull by the horns and called them back. When someone answered, I told them that I had a new number, that Nationwide was calling every day, that I was not indebted to them, and to stop calling. The guy asked my name. I told him he didn't need my name, only my phone number so they could stop calling it. Then he told me my first name (as it is on the message). I said yes, and the person who used to have the number changed to something else, and I wanted them to stop calling. He said they would.

If I can remember my new blogger password tomorrow, I'll let you know if they have stopped.

Yesterday, I went to the nursing home to see Pawpaw, and hang a wreath on his door. When I got there, he was in the bathroom with an aide. I could hear her shaving him, so I put the wreath on the door, and turned on the battery powered lights. I had also brought a picture for his wall and a Command hook. The directions said to place the hook on the wall and wait an hour before hanging anything. So I asked Pawpaw if he wanted to go for a walk. It's the only exercise he gets and the staff doesn't have time, so if the family doesn't walk with him, he doesn't get any exercise.

He was in his wheelchair when I got there, nicely dressed in slacks and a button down shirt, and tennis shoes for better traction. I brought his walker over and he got up and began walking. For some reason he always turns right out of his room, and there is no where to go that way, so I suggested we turn and go the other way. As Pawpaw was turning, his pants started slipping off. He grabbed them and tried to pull them up, and I said we'd better go back to his room and get a belt. He started walking into the room next to his and then his pants dropped to the floor. I stopped him before he could flash the two ladies who live in that room, pulled his pants up and held on to them, and got him going toward his door. He turned to me, grinned and said, "You know, there was a time when that would have embarrassed me."

By Marti at 08 December 2 comments: