Finished the Dining Room Ceiling. Things I Learned that You Should Know Too 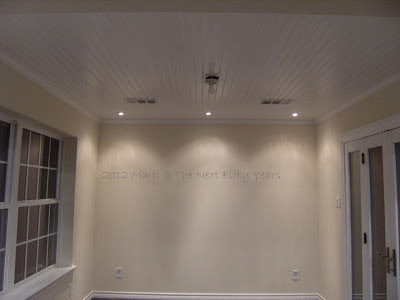 Hubby primed the tongue-and-groove pine planks before putting it up, but left the finishing to me. I caulked the perimeter as well as between each plank; filled all the knot holes, dents, and dings; sanded; and applied two coats of semi-gloss paint.

I found it easier to use the kitchen step stool that I could pick up and move easily rather than a heavy step ladder even though it was a bit short. I learned how to sand the ceiling with my eyes closed while standing tip toe on the top step. I learned early on that if I opened my eyes, I would soon have tears streaming down my face as my eyes filled with dust. So this saved time and irritation.

Another thing I learned, and this is what I wanted to pass onto you dear reader, is the trick of putting a rubber band around a gallon of paint. 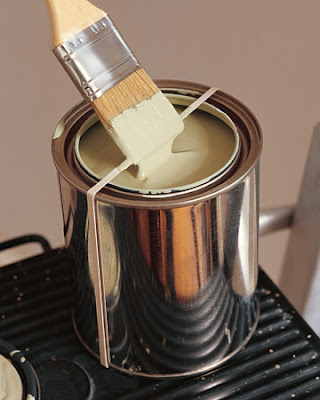 No, I didn't invent this trick, and you have probably heard of it too. That's not what I wanted to tell you.

Hubby hadn't heard of this trick, and for those of you who haven't heard of it either, the rubber band around the middle is to wipe off the excess paint after you dip it into the bucket. It keeps the paint from filling the groove around the edge of the can, which, when dried, keeps the lid from sealing again.

And of course, it happened right in front of Hubby, who no longer thought I was ingenious.

By Marti at 18 December 9 comments:

Wordless Wednesday. So What if it's Thursday. 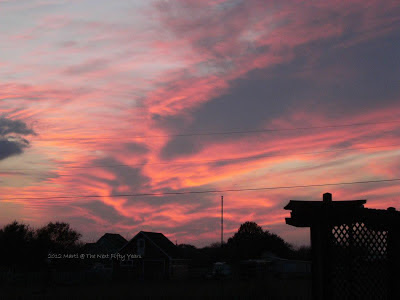 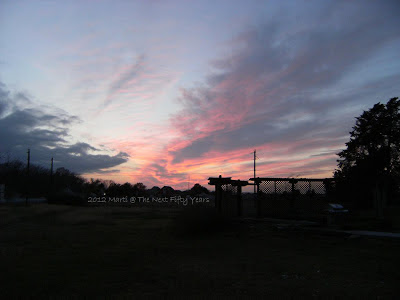 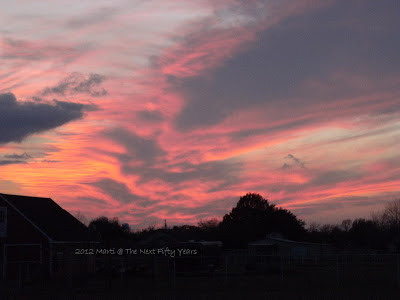 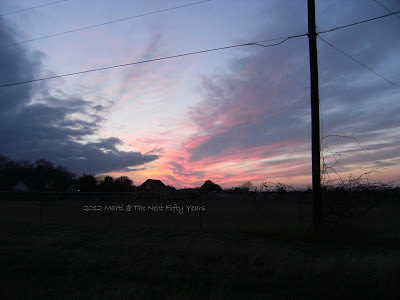 By Marti at 13 December 4 comments:

As If I Don't Have Enough Going On

You know how one thing leads to another, and then to another, until you are doing something totally different than you intended? That happened to me this weekend. I have been trying to decide on a chandelier for the dining room and now I'm refinishing a table I bought off Craig's List. How did that happen? Let me back up.

In order for me to visualize a chandelier in the dining room, I needed to see how one would look over the table in the room. So Hubby and I moved the table into the room. I sold all the upholstered parson's chairs I used to use with the table, and now I just have four Windsor chairs that came with our first table. So I moved one of those in there too. Are you following me? Good. 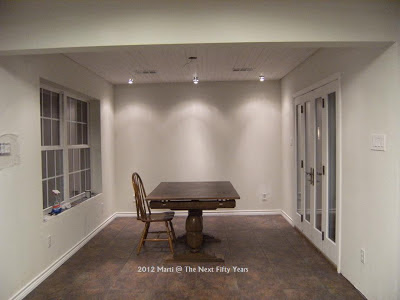 I have a love-hate relationship with this table. It is an antique, draw leaf, parquet top, gorgeous hunk of trestle style table, but the drawbacks are that it is an antique, draw leaf, parquet top, hunk of trestle style table. It has a shellac finish on it which shows every water ring, every spot a hot item has been place on top of a trivet on the table. And the trestle feet are spaced too far apart for one chair, and too close together for two chairs to fit between, so someone is always straddling a pedestal with no where to put one of their feet except on the trestle. Unless the leaves are pulled out, no one can sit comfortably on the ends either because the table top doesn't extend out far enough.

But once photographed with my Windsor chairs, I could see that something else was off. I posted the above photo on a decorating forum and the folks there pointed out the obvious: my chairs are too delicate for the table.

I love those chairs. Hubby and I bought four of those with a solid oak, round pedestal table at an unfinished furniture store in 1985, finished them, and used them in our dining room for twenty-five years. We use the table in the den now and last year bought upholstered swivel chairs so we can use it as a game table. That's when I moved the Windsor chairs to the dining room. I never stood back and looked at the scale of the table and chairs. But now that I have, something needs to go, and it won't be my chairs.

Sunday afternoon, I was perusing Craig's List and saw a table like my round one, except this one had a leaf, and mine is a solid wood top. In the photo, the top was beside the base, and I called about it. The owner told me that it was in good condition except she had lost one of the bolts that held the top to the base. The price was right, so Hubby and I decided to go see it. As is always the case when I find something on CL, it was in a suburb north of Dallas, which meant a three hour round trip drive even if we didn't buy it.

Once we got there, the owner told us that the veneer on the top had come loose in a few places but it would be ok with a tablecloth on it. She told us she always used coasters but sometimes people who came over didn't use them. The top was wavy and bubbled, but Hubby looked it over and said it might be salvageable. We negotiated with the lady and got the table for $20. Even if I have to build a new table top, the extension mechanism is worth $20. I intended to put the table together and take a before picture, but by the time I came out with my camera, Hubby was already sanding the top. He had only done a little of one side, so I made him stop so I could take a photo. 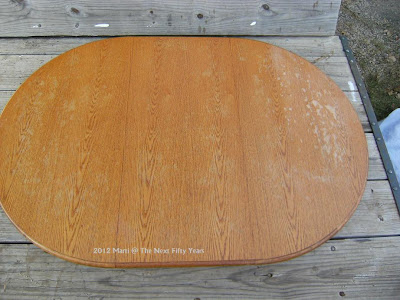 By the time we got the top smooth and flat, the bubbled places were sanded down to new wood and even down to the particle board in places. Hubby tried staining it to see what it looked like, but the stain was darker on those former bubbled places. So the easy route is out.  Good thing they used coasters, right? 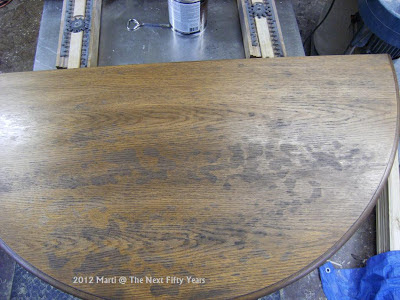 I took that stain off and let it dry overnight. Today I tried a heavy faux woodgrain over it. This is the first coat. 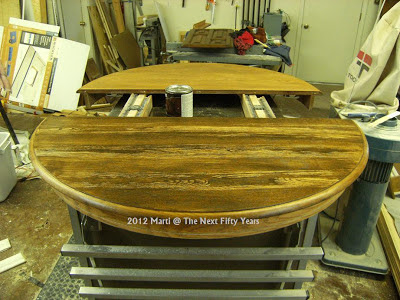 (I know you're thinking What a mess!, and you're right. So focus on the table, ok?) The bubbled places are covered, but they have a different sheen and still show when the lighting is across it. 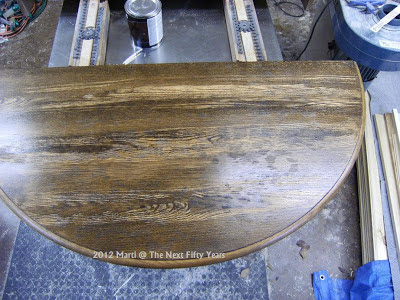 Tomorrow I'll put a second coat on so the whole top is the same color. If the bubbled spots still show, I'll strip it all off and just paint the top. But that's my absolute last resort. I'm not crazy about painted table tops. And that's how looking for a chandelier ended up with refinishing a table. As if I didn't have enough going on right now. ....

Guess what? I found some shoes to wear when I'm standing on tile or concrete all day. 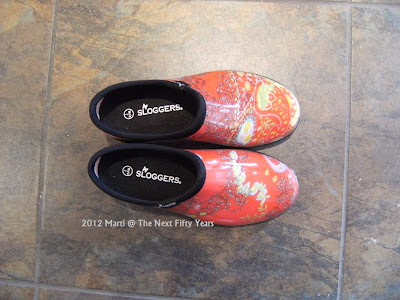 I went to First Monday Trade Days in Canton with some friends and found them there. They are really comfortable for standing, not so much for a lot of walking. And they're cute! he he he

Saturday night, I was so revved up after a day with friends and so much to see (and a little caffeine) that I couldn't sleep. I started thinking of all the things I need to get done by Christmas, and the dining room and my table problem was one of those things. That's when the idea of getting a table similar to the one I already have hit me. When we have a big crowd for dinner, I can always move the other table into the kitchen too. Perfect. I hope.

By Marti at 03 December 3 comments: