When Life Gives You Watermelons....

We had a bumper crop from a volunteer vine in the compost. After eating all we wanted and giving away to anyone who would take them, we still had watermelon. So I juiced one, or what was left after we cut a few slices off. Doesn't it look yummy? 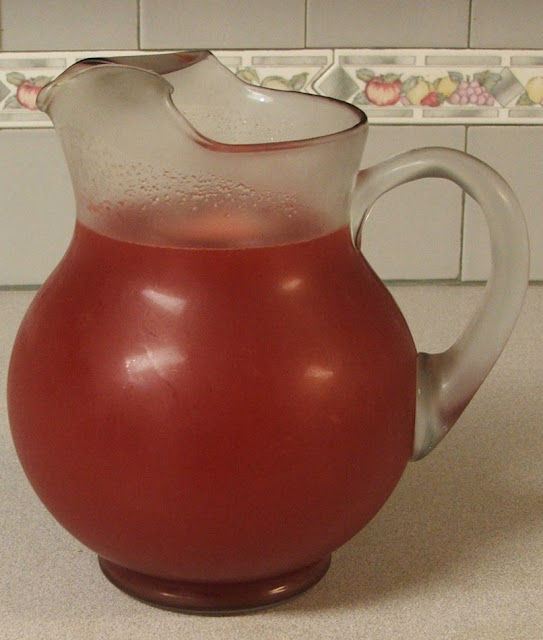 It wasn't. There is a reason you don't see watermelon juice in stores.

Until next time, may you have blessings and a bumper crop of any other fruit,
Marti
By Marti at 20 October

Possums. Not Cute, and Not Smart

This little guy (or gal) got stuck between the chainlink fence and a cattle panel and couldn't figure out how to back up. Even after I pulled the cattle panel out, he just sat there. When I came back out later with the camera, he was still there, glaring. 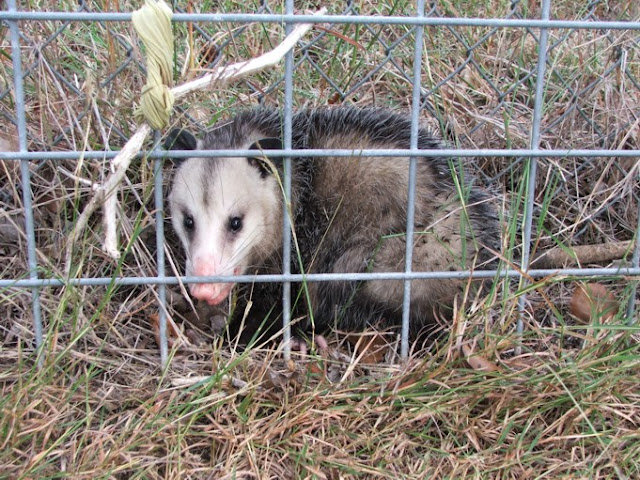 Until next time, may you have blessings and a glimpse at the wildlife around you,
Marti
By Marti at 20 October

In the Blink of an Eye

I’ve talked before about my group of longtime friends, most I’ve known since junior high, and some since first grade. Several of us were planning a weekend trip to First Monday Trade Days in Canton this weekend. That all changed with a phone call last Tuesday. Hubby and I had traded phones and he had a meeting that day, but he called after lunch to say he had gotten a garbled message from one of the girls in our group. She said someone died and he wasn’t sure but he thought it might have been the husband of another friend, and she wanted me to call the rest of our group and let them know.

Of course that couldn’t be right. None of our group was in ill health, all were active and working. It had to be a misunderstanding due to a bad phone connection. So my first call was to make sure it wasn’t K’s husband. But it was. M and K had been out of town and were driving home when he suddenly hit the brake and asked her to take the wheel. By the time she got the car to the side of the road, he was gone. In the blink of an eye, she went from planning a fun weekend with us to a grieving widow.

The rest of my day was spent trying to get in touch with my friends and numbly staring off into space as I mourned for my friend and the pain she was feeling. I mourned for M too. He was so much fun, always joking but with a big smile and hug for friends. His voice sounded like melting chocolate and we always teased that he should be doing commercials. He and K had the same relationship they did when they met thirty-six years ago, one minute bantering back and forth and the next minute sweet-talking each other and giggling like kids. I know; I was there the day they met.

The next morning I picked up another friend and we drove to our hometown to be there for K. It helped to talk on the long ride up, and I thought I had a handle on my emotions until I saw K. I cry over Hallmark commercials and I couldn’t hold it together once I saw her. The next day, the church was packed and we were lucky to find seats during the funeral. K wisely picked uplifting songs that she and M both liked, and she elected not to have anyone speak except the priest. She said she didn’t want to start crying because once she started, the kids would lose it, and she didn’t want anyone talking about her falling apart. Like I said, she is very wise.

It was really hard to leave town. We both wanted to stay in case she needed to talk, or gripe, or scream, or cry. But her family was there and she had things she had to take care of, so we left – with plans to go back in a few weeks when life has gone on for the rest of the world.

M and K got married about a month before we did. Thinking about them made me look back over our lives too. When we were young, newly married, and had our whole lives ahead of us, we didn’t give a lot of thought to the future. When we did think of it, it was in fairly vague terms of growing old together. Sure, we had a will and knew it was possible that something could happen to us, but that was in the hazy, distant future. It’s not hazy anymore.

Until next time, may you have blessings and friends of a lifetime,
Marti
By Marti at 01 October