Fitting Shutters to the Brick Trim 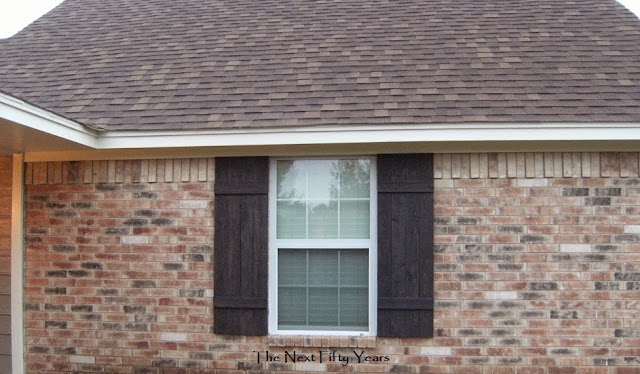 One of the things we did during my blog absence was to build shutters for our house. We just built simple board shutters. There are hundreds, if not thousands, of tutorials for them on the net so I won't go there. What I did want to show you is how we made them fit with the irregularly spaced soldier brick.

I've told you before that Moe, Larry, and Curly built our house. Shemp installed the shutters. This house would look fine without shutters, or it would have before Shemp started working. The bricklayer, whose name does not live in infamy, put soldier brick on the top row. That is when the brick are laid vertically, and on ours every other brick is laid with the bottom kicked out about a half inch. 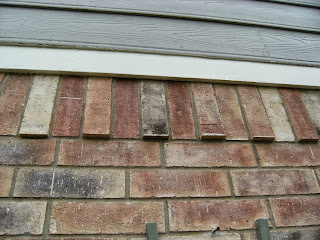 That half inch sticking out was a problem for Shemp and the cheap vinyl shutters he was going to install. These shutters only had a front and sides, so they were basically a Tupperware lid, and yet Shemp couldn't figure out how to make them lay flat against the brick with the ends of those soldier bricks sticking out. Being all brawn and no brain, Shemp soon figured out exactly how to remedy the situation though. He picked up a sledge hammer and bashed in the offending soldier brick. Did I mention the shutters were vinyl and could have been cut with a pair of scissors? 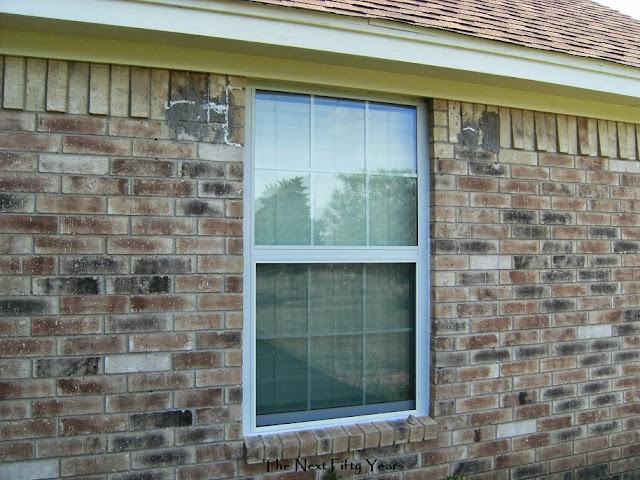 He slapped some mortar into the holes he made, not being careful to fill them completely because he was in a hurry, and then he installed the shutters. And there they stayed for thirteen years until we bought the house and took them down to paint. I had heard buzzing that sounded like it came from the walls and sure enough, mud daubers had found enough holes and cracks in Shemp's patches that they had gotten into the wall.

Since we were going to put the shutters back up, we just caulked the holes and didn't worry about rebricking around the windows. But the shutters we built are just a little wider than the originals and solid wood, so flat across the back, and the bashed bricks weren't completely flat either. So we had to come up with a solution to make the shutters lie flat. This solution also worked on the window that didn't originally have shutters and still had intact soldier brick.

We cut one inch strips and attached to each side on the back, cutting them short where they met a kicked out soldier brick. 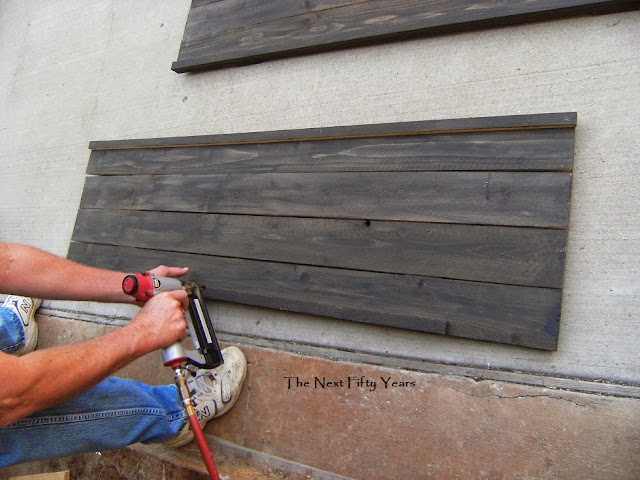 Looks good from the front. 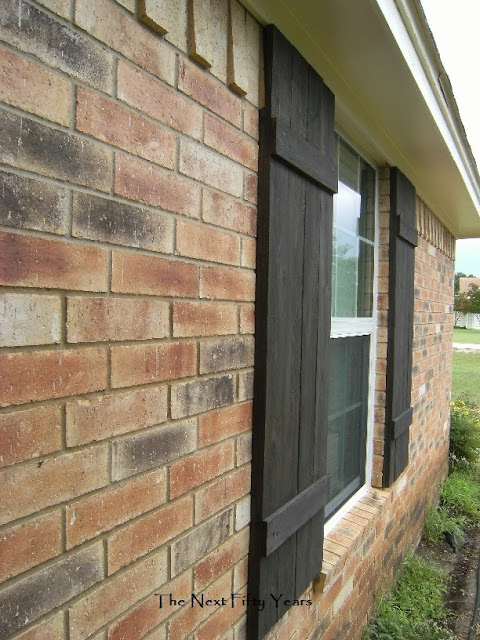 Crinum in the Garden

These are blooming profusely right now, so I had to take a picture even though the background should have been cleaned up.

I'm back to stay I think. I rearranged furniture in the family room so I have a table (well, a tv stand) and chair for the computer. If you haven't read about my computer problems, the short story is that Hubby moved the router to the garage and I couldn't stay online for more than five minutes, and trying to post kicked me off every time. So Hubby pulled the cord from the tv and now I have a connection - as long as I am connected to the cord. The cord is only five feet long which puts me in the corner next to the tv. The other problem is that the cord comes from the right side but connects to the left side of my computer and the power cord comes from the left side but connects to the right side of my computer. So when I sat in the chair with the computer on my lap, the cords tied me into the chair. But now with the chairs moved around and a makeshift table for the computer, I think I'm back in business.

I've made several blog entries in my mind over the past weeks and hopefully I'll remember them now that I can actually post them. It also seems that blogger has fixed some of the problems that have been plaguing me. At least the comments I've made today to other blogs have posted correctly.

Edited to add: Still have some issues with comments I made. The comments posted to the blog, but the email that was supposed to go to the blogger bounced back. This happened on Life in Pieces, 501 Quilt Blocks, and Wyoming Breezes, all blogspot blogs like mine, so I think blogger still has a few bugs in it.

So here goes nothing, I'm going to press the Publish button to see what happens.