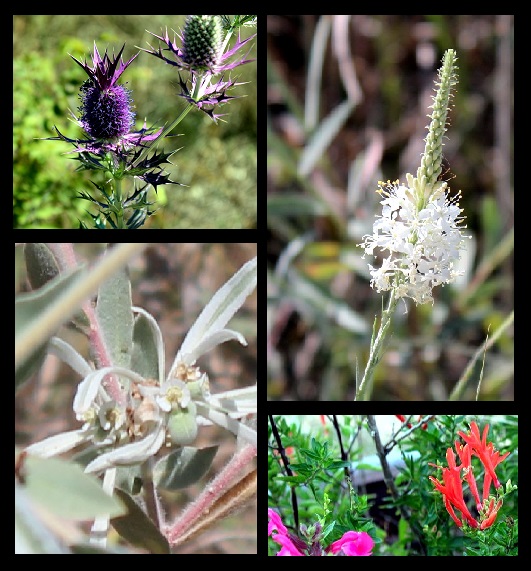 A few weeks ago, I read a post by Angie of Letting Go of the Bay Leaf. She goes on long walks through woods and fields and takes the most amazing photos of plants and wildlife. I looked out at my drought-stricken field and thought there's no way anything is blooming around here. But the next time I had some free time, I drove down a few nearby roads, and this is what I found.

Farmers around here are complaining that the ground is so hard they can't plow for fall planting, so I didn't expect to find much, if anything. Imagine my surprise when I came upon a field covered with white blooms.

But it wasn't blooms. The upper leaves on this plant change to white in late summer. Snow on the Prairie, aka Snow on the Mountain, (Euphorbia marginata) is considered poisonous and a threat to livestock, so it's safe to say this field is not being farmed. The plant is a source of nectar for bees and butterflies and this time of year, beekeepers aren't collecting honey but letting their bees build up their hives for winter. The plant is a little plain here, but further north in the Texas panhandle, the plant leaves are showy, larger, and more varigated. Another Euphorbia you're probably familiar with is Euphorbia pulcherrima, the Christmas poinsettia. 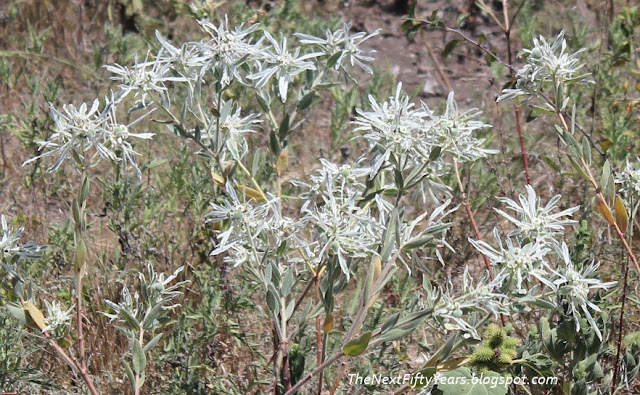 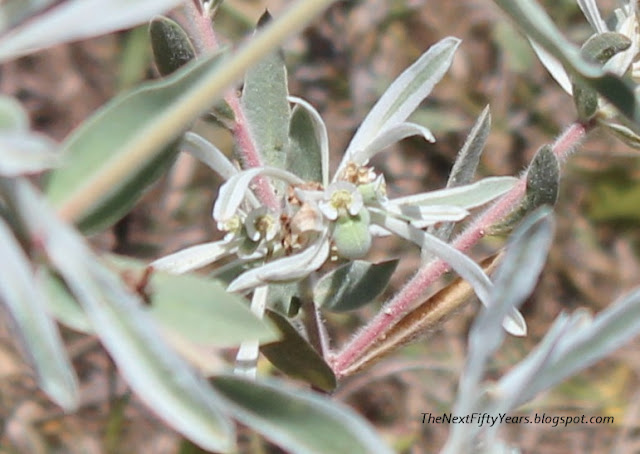 Near every fenceline, I spotted the purple heads of False Purple Thistle (Eryngium leavenworthii). Again, not a true flower, but the seed head is purple along with the leaves surrounding it. 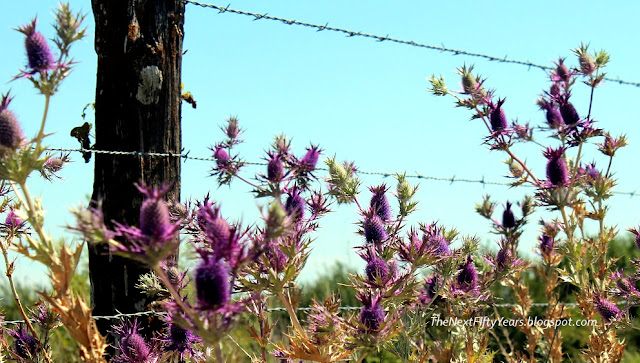 Then I rounded a corner and finally saw a bigger patch of them. These may be pretty, but take my word for it that they have nasty spines all over the plant that burn when they touch skin. Our front pasture was covered with these and I once made the mistake of trying to walk through them to get to the other side. Ouch, ouch, ouch! 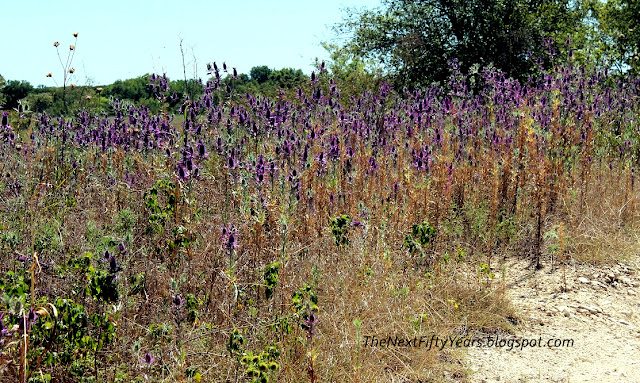 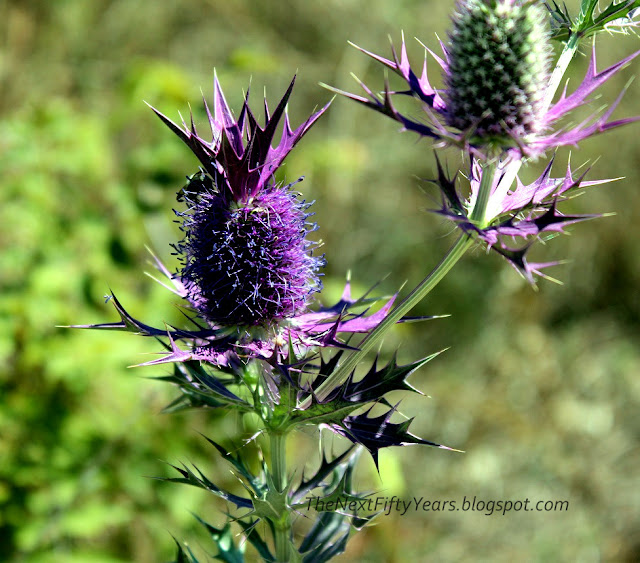 Another curve in the road, and I found my first true flowers. 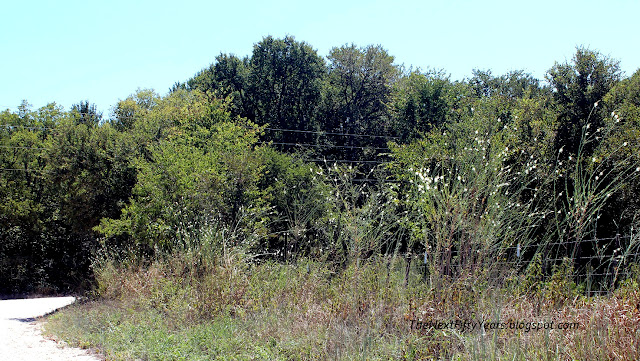 It might not look like much, but they are photo worthy because of their size. These false gaura, are about eight feet tall. The usual height is around two feet. There were honey bees flitting from bloom to bloom. Obviously, they appreciated these little flowers, no matter the height. 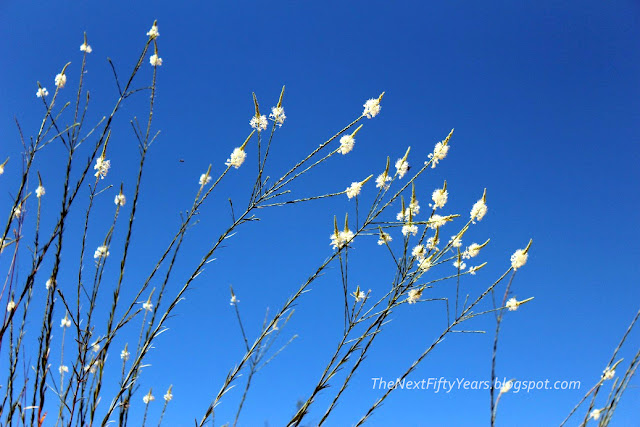 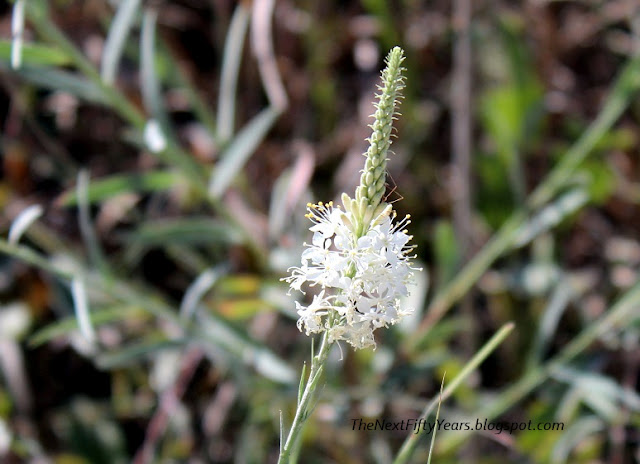 I'm linking to:
Mosaic Monday at Letting Go of the Bay Leaf

By Marti at 22 September 13 comments:

Out of the Way Drying Rack

I haven't posted any DIY stuff in a long time so I thought I'd show you something I built even though there is nothing fancy about it at all.

One of the hardest things about downsizing is the lack of out-of-the-way space. One of the reasons we sold our last house was that we had so much space we never used, rooms we seldom went into. When we drew up the plans for this home, we tried to make use of every square foot and I wanted the washer and dryer to be more convenient and efficient. To make it easier to get laundry done we put the washer and dryer between the shower and the closet. No more schlepping dirty laundry from the bathroom across the house to a laundry room, and then back to to the closet. Unfortunately, that left no place to drip dry any clothes near the washing machine.

I knew we were going to have stairs to the attic and thought I would put a clothes line up there, similar an idea presented by Amy Dacyczyn in her book Tightwad Gazette. We weren't here long before I decided that Amy D's attic didn't reach 120 degrees by mid June. I needed a plan that wouldn't cause heat stroke.

As I looked around the laundry area, the bathrooms, and the closet, the only usable space where such an eyesore could exist was in the closet. It's just a simple clothes rod that folds against the wall when not in use. A magnet holds it in place. (One of these days I need to find a smaller magnet.) I put it over the door in the closet so it wouldn't be in the way (as much) when being used. Luckily, there are two doors into this closet so there will always be a way into the closet and there will be more air flow when drying clothes. 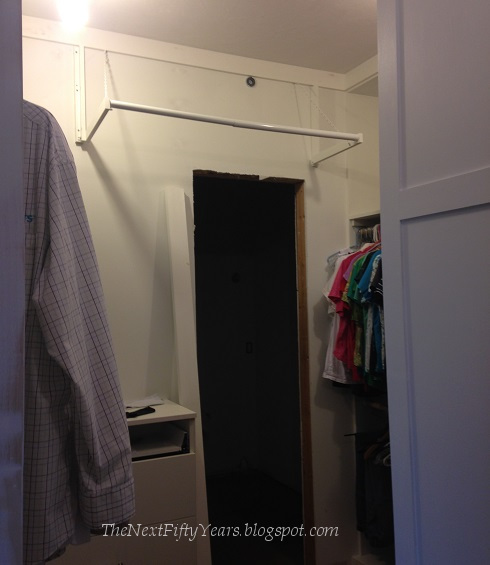 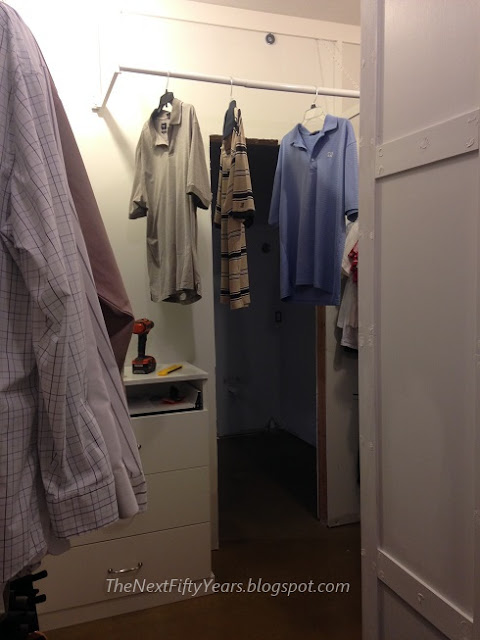 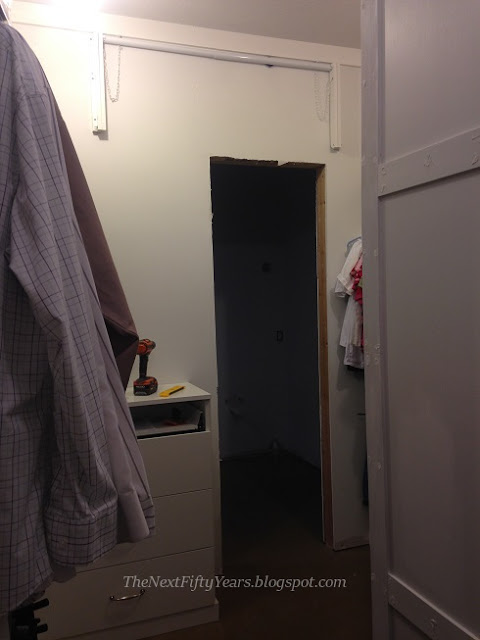 By Marti at 19 September 6 comments: 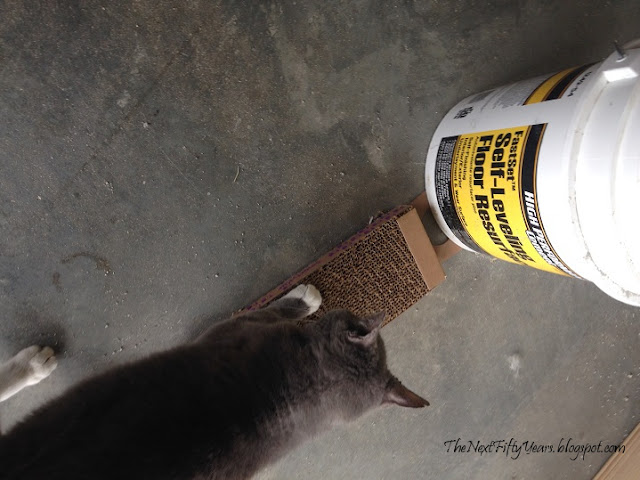 Email ThisBlogThis!Share to TwitterShare to FacebookShare to Pinterest
Labels: Buddy-T.-Cat

Relief Is in Sight

And then a cold front will drop the temperatures into the low 90's/upper 80's. Just ten more days of hot, hot, hot.

How's the weather where you are?

By Marti at 09 September 4 comments:

Where Did the Mojo Go? 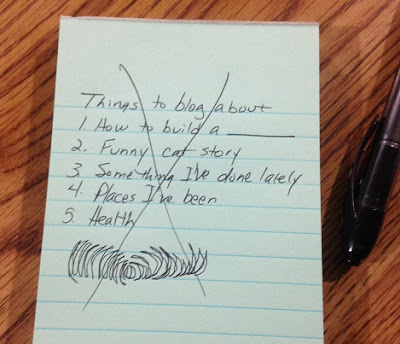 Have you ever lost your blogging mojo? Or maybe it's writer's block, blank brain, or just plain apathy. Whatever the case, I have been in a funk for quite a while. Oh sure, I can think of things while I'm driving down the road, or have a hammer or paintbrush in my hand, but the minute I sit in front of the computer, my mind is a barren wasteland.

I've gotten a couple of emails in the last few weeks asking me why I haven't been blogging and a friend asked me to post more about our barndominium. But what made me feel guilty about not blogging was when my mother called and told me she felt that she was missing out on our lives without my blog. Nothing like mom-guilt, right? So I sat down at the computer, opened a new post page and watched the cursor blinking in the corner. Then I looked at facebook, watched a youtube video, tried to make a list of things to blog about, and finally emailed a blogging buddy who hasn't missed a week in ten years to ask how she does it.

Number 1. When she doesn't have the time or inspiration, she hires a ghost writer. Drat. She is a food blogger who has ads and sponsors and can't afford NOT to post a couple of times a week. And because she has ads and sponsors and doesn't want it known that she doesn't write every single word herself, I am not going to link to her blog. Obviously, a small-time personal blogger like me can't do that.

Number 2. Finish a draft post. How did she know I have unfinished draft posts? I guess most people do. I looked at my drafts and they either require extensive research or photos of something I don't yet have. There are a couple of one-liners I could develop - if I could think. But I'll keep it in mind for another day.

Number 3. What did you do today? What is fresh on your mind? I went to an estate sale that was closed when I got there and then went to the grocery store. BORRRRING! And then I patched nail holes in the wall where I built a clothes drying rack this week. STILL BORRRRING. "Back up," she says. "Pick up your phone, photograph the drying rack, and BOOM, you have a post."

Number 4. What was the subject of the last long conversation with someone? What was the last comment you made on a facebook post, or blog, or online forum? Is it post worthy? Most of my conversation lately is with the cat and his major accomplishment this summer is to be sleeping in precisely the spot I need to be.

Number 5. Rewrite, update, or expand a previous blog post. Another good idea, but one that will take some time and a few more brain cells than I have at the moment.

Number 6. And this may be the most important for future posts. Keep your iphone at hand at all times. When you see something interesting, take a picture, or a lot of pictures. The pictures will prompt your memory later. If it's an idea, turn your phone to video and make a voice recording. That's easier and faster than trying to find something to write on, or even to type a note into your phone.

Number 7. Have a specific posting day, or days. People like structure, even on blogs like mine that seem to have no structure. Ouch. Sometimes truth hurts.

I joined a couple of hyperthyoidism facebook groups and common complaints are brain fog and memory loss. Maybe that's part of my blogging problem though that has gotten much better in the past few months. I still misplace words that were just on the tip of my tongue and I forget what car I drove to the grocery store when I have a full basket of frozen food, but all in all, I feel closer to normal than I have in a couple of years. I hate to claim that excuse but even more, I hate to think I have nothing more to contribute here.

At least it will make mom happy. And I was just kidding about the mom-guilt. Mostly.

By Marti at 08 September 5 comments: