We Seem to Attract Gray Cats

When you walk in our front door, the first thing you see is the partially ripped up wood flooring, and next to that in the empty living room is a scaffold. There is a toilet in the hall bathtub, and our bed is still in the middle of the family room. I can joke about it to others, but being here 24/7 has worn my nerves and mood. So it was with great relief that we spent a long weekend in Branson recently. We met the married kids, did the Arts and Music festival at Silver Dollar City, and took in a show in town.

We stayed in a condo at a resort where we have stayed before, and the first thing we saw while going to our car the first day was this cat. We thought he belonged to someone staying in one of the condos, but there is a no pet policy there and the check in instructions say not to touch any animals we may see as they are either strays or belong to neighboring homes. This cat had a collar and seemed to stay in the condo parking lot all the time. A little girl from another condo took up with the cat and carried him around everywhere, and the cat seemed perfectly content to go along with whatever she wanted to do.

I went out to take a photo and found the little girl holding him. I asked if I could take a picture of him, and the little girl set him down and just in time too. He promptly threw up and then walked over to this curb to recuperate. After a few minutes, the little girl picked him up again and took him over to the swimming pool. She stood at the edge of the pool watching people play and swim and the cat sat calmly in her arms. So this cat only resembles my cat in color, not personality. 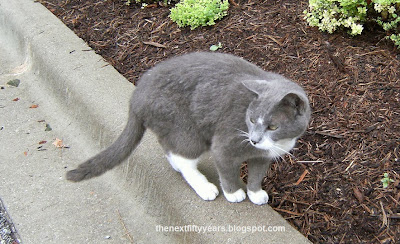 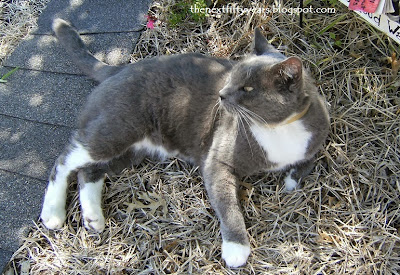 And this is the first cat Hubby and I had. We didn't have him long as we got him from a neighbor on a Friday and when we took him to the vet for shots on Monday, we learned he had distemper. It was a long time before we could let another cat into our lives after that. 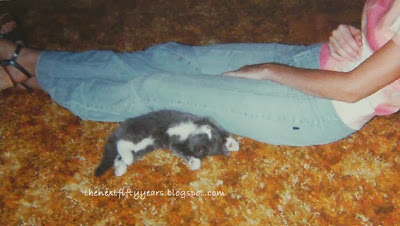 Like that crazy orange and gold shag carpet? It was in the house when we bought it, but I don't remember thinking it was hideous at the time.   If you are wondering how long ago that was, it took me a few minutes to realize that that was me sitting next to the cat.  A much younger and thinner me.

By Marti at 30 September 3 comments:

This morning the pastor said that it is so easy to fall away from church. First you miss a Sunday, and the next Sunday you think to yourself that you don't really feel like going this day either, even though you feel a bit guilty. The next Sunday it's easier not to go, and on until the day comes that you think to yourself that you can worship right there on the patio with your cup of coffee.

I think the same is true of blogging. Not that blogging is the same as church attendance, but the falling away is the same. One day I'm too busy, but I think about it during the day, composing a post in my mind but forgetting most of it by the time I sit down in front of the computer at the end of my day. As the days go by, I think less and less about posting, except to think to myself that when I get such and such done, I'll write a post summarizing the whole ordeal. And then that never happens either.

I often wonder if that is what happened to some of the blogs I used to read regularly. One is a real puzzle to me. It was written by a pair of sisters and they had a lot of neat craft ideas, recipes, and a weekly linky party. The last post, written about a year ago, was a linky party with no mention of it being their last post, or taking a break, or anything. Just no more posts.

I've been thinking all week how handy this blog has been when I want to know something that happened since I've been writing it. This week when the plumber was here, I really wished I had been blogging and photographing when we built the garage. It would have saved a lot of time. Tomorrow I'll try to post what I learned from the plumber so you might save some money should you ever be in the same circumstance.

The situation with the house has gotten to me. I feel frustrated and stymied and spend a lot of time spinning my wheels and a lot of time just plain depressed about it. Here's where we stand. The master bedroom is empty. The bed is in the middle of the family room, the dresser is in the dining room, and the clothes are scattered in every non-empty room. Nothing like waking up in the middle of the night without a pillow because there is no headboard to hold it in, plus the fact that NO ONE is invited into our house because THERE'S A BED IN THE MIDDLE OF THE ROOM! No matter what the bedroom looks like when we are done, I'll appreciate just having a bedroom.

The wood flooring is still in a state of being partially removed and the glue remains stuck to the floor where the wood has been taken up. I found a replacement wood floor that I like, and in reading the installation instructions I found that calcium chloride tests need to be done to satisfy the warranty requirements. I called all three flooring contractors who had given me bids and all of them blew it off, saying they always used a moisture meter. So I bought the tests and ground off the glue and paint splatters from the slab which spread a layer of dust throughout the house.

According to the installation instructions, the calcium chloride tests couldn't be over 3 pounds per 1000 square feet, and all of these were over that. I talked to the manufacturer and was told to check the foundation for plumbing leaks (which is why the plumber was here) and if one was found and then fixed, do the tests again.

The plumber found no leaks in the foundation, but he did find that there was a leak somewhere between the house and the water faucet forty feet away. Luckily, our drought conditions made one green spot in the yard a likely possibility, and sure enough there was a break in the pipe under the faucet. So Hubby spent his Saturday busting out concrete and replacing that pipe and faucet.

Meanwhile, the flooring manufacturer said there is a moisture resistant adhesive they make that can be used on slabs that are under 4 pounds per thousand square feet. So we're good to go there.

What we still need to do, and the main source of my frustration, is that we have to seal the slab we will carpet and we haven't got a plan for sealing it. And after I made such a huge dusty mess just grinding off the glue in three square feet, I am afraid the people who remove the remaining 370 square feet are going to make a mess that will take me weeks to clean up.

But trying to remain positive and going forward, I have made a list of every little thing that needs to be done to the house, and tomorrow I am getting the first drywall bid. I was beginning to despair of any of them even calling back. Maybe another will call back tomorrow so I can have at least two bids.

I've been listing stuff on craig's list and have given away a lot of materials that were laying around here, and even got the fence removed from around the garden by someone who wanted the t-posts and fencing wire. Now if I could just sell the good stuff.

I'm sure my mood will improve when we begin to make some progress on the house, and when the temperature begins to drop. The older I get, the less I can tolerate day after day of temperatures near 100. We're supposed to drop into the mid 90's by Thursday and I hope it continues to drop every day until the days are pleasant again. Friday morning, the tv weatherman said we would all be happy to hear that the high was not going to be 100, only 99. Well, I don't know about him, but I'm just as hot at 99 as I am at 100. I won't really be happy until the temperatures are below 90, and then I'll probably talk about how much I love fall and living here. It's like the pain of childbirth they say everyone forgets soon after the birth, except I start dreading the heat again by mid May.

So there you are. If you've managed to read through all this, you are caught up on my life, and maybe, just maybe, I'll remember to post again tomorrow.

By Marti at 08 September 7 comments: