This week, I am moving on to the garage. We aren't getting any work done inside the house because our garage workspace has become such a cluttered mess. So the goal this week is to clean out the workspace and then get to work. If you don't have a garage, you can cleanout the basement or wherever you consider your workspace. 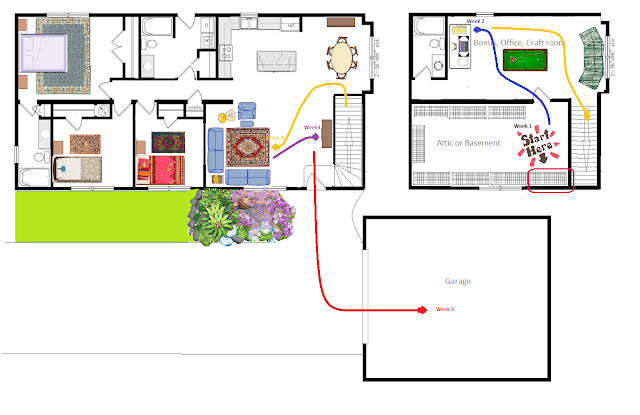 By Marti at 31 January 7 comments:

The Day Mom Taught Me How to Use a Seam Ripper

Yesterday, while I was ripping out a couple of seams in a quilt block, I thought of all the seam ripping I have done over the years. But none sticks out in my memory like the first time.

When I was a little girl, mom made most of my clothes. It wasn't a big deal when I was preschool or early in elementary grades because a lot of my friends' mothers made their clothes too. And I wasn't very particular when I was younger either. Somewhere around fourth grade, I started to notice that other girls' clothes were nicer than mine, even the girls whose mothers sewed for them, and it finally dawned on me that mom didn't sew well. There is a picture of me in fourth grade wearing my Easter finery, with the Peter Pan collar just off center. When I mentioned it to mom, she said no one would notice, but they did. For the most part, mom made all my dresses from one pattern that wasn't very complicated. Just monotonous.  It was when she tried other patterns things went awry.

In our elementary school, there was a fall open house on the last Friday before Halloween. There was some kind of performance given by the arts department with fifth and sixth grades, a spaghetti supper, a pie raffle, and a smoking cauldron of punch (courtesy of dry ice) dipped out by a teacher wearing a witch costume.  Back then, kids didn't wear there weren't a lot of school parties, and kids didn't wear their Halloween costume to school.  Ever.  The only costumes worn were for a school performance.

In fifth grade, the program had a Mexican theme and my costume was a colorful dress with a very full gathered skirt. It actually turned out well, except for the zipper which didn't match up quite right. When zipped, there was about a fourth inch of zipper teeth sticking out on the top of one side and the zipper pull wouldn't stay up. So after zipping up my dress (the zipper was in the back), mom had to secure the zipper with a safety pin and cover it with my hair which was constantly getting caught in those extra zipper teeth. After the open house, the dress became one of my school dresses until I finally outgrew it.

In sixth grade, the theme was Pilgrims and Indians, and my costume was an Indian girl. Mom made it out of unbleached muslin, using the same pattern she used to make my slips, just a straight, sleeveless shift with a tank top style bodice. She did raise the neckline to hide the slip underneath, and she embellished the neckline with colorful little beads, with a big teardrop shaped bead in the center. After we got home from the open house, she told me she would take the beads off and then it would be my new school dress. Back then, sixth grade was that awkward pubescent time of girls beginning to be being interested in boys: changing bodies and training bras, gossip girls and curious boys.  I was horrified that I would have to wear this, this underwear in front of the boys, much less in front of the other girls in their cute, store bought clothes.  I told her it wouldn't look good, but she insisted it would be fine once the beads were off.  I knew it would look like I had forgotten to wear a dress over my slip.

I don't know if other children back then argued with their parents, but we certainly didn't. So I quickly volunteered to remove the beads and made a beeline for her sewing scissors. In the privacy of my bedroom, I cut away the teardrop bead and the fabric under it, leaving a big hole just under the neckline of the offending garment. When I showed it to mom, she was fit to be tied, thinking I didn't know how to snip the threads holding the beads in place. I didn't care what kind of punishment I would get, it was better than wearing underwear to school for all to see.  Kids today want other kids to see their underwear but we tried to keep it covered.

My punishment was handed out the next day when mom sat me down next to her and showed me how to slide the pointed end of the seam ripper under each stitch to remove it. She made me rip out every stitch on the bodice so she could re-cut it and make it into a normal slip. Nowadays, I only rip every fourth or fifth stitch and pull the thread from the opposite side, and mom may have done that then too, but she made me rip every stitch. I think both of us learned a lesson that day, or maybe it was just coincidence that soon after that, mom went back to work and I had fewer homemade clothes. There was an orange skirt she made when I was in eighth grade that she made me wear with a black sweater, and not on Halloween. But that's another story.

By Marti at 27 January 9 comments:

While spiffing up the living room last week, I found a pile of gloves and scarves and the lamps that used to be on my foyer table in our last house. We don't have a foyer here or even a coat closet, and even though I kept the table, it won't fit beside the door. This week, I want to work on that area; I want to find a way to organize gloves, keys, coats, wet shoes, and mail that needs to go to the post office.

If you don't have a foyer, or even if you do, what are your tips and tricks for keeping it in order? If yours has become a dump zone too, join me in decluttering this first impression area of the house. 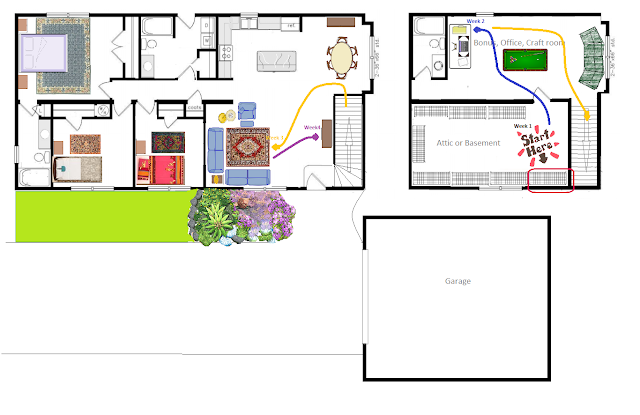 By Marti at 22 January 5 comments:

I am such a bad blogger. Not only have I let this blog languish while concentrating on my quilting blog, I haven't been taking before and after photos of projects. Here is a project I just finished. I bought this little resin frog figure many years ago and put it on rock in my pond. Originally, it had been painted typical frog colors, dark green with light tummies for the frogs on a bright green lily pad. Over the years, it had faded to a whitish gray. I was going to put it in my stock tank pond, but it didn't show up against the galvanized tank, so I thought I'd give it a makeover - this time making it a bronze finish.

I sprayed it with primer, then Rustoleum copper, then aquamarine metallic - wiping off the excess. To tone down the brightness of the copper and aqua, I dabbed on some Precious Metals antiquing and buffed it. Now I like it so well, I think I'll keep it in the house. 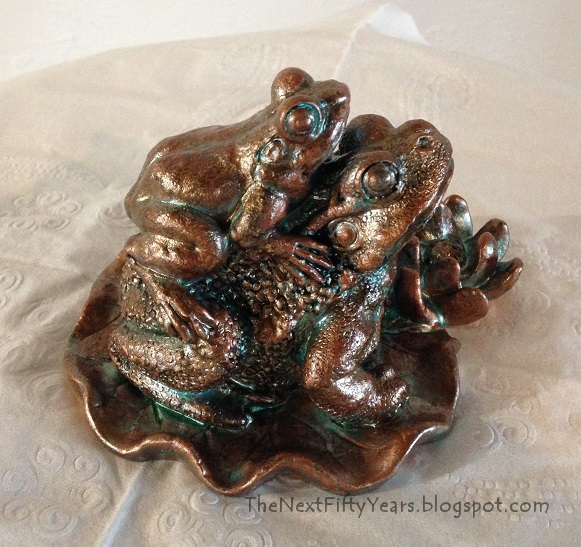 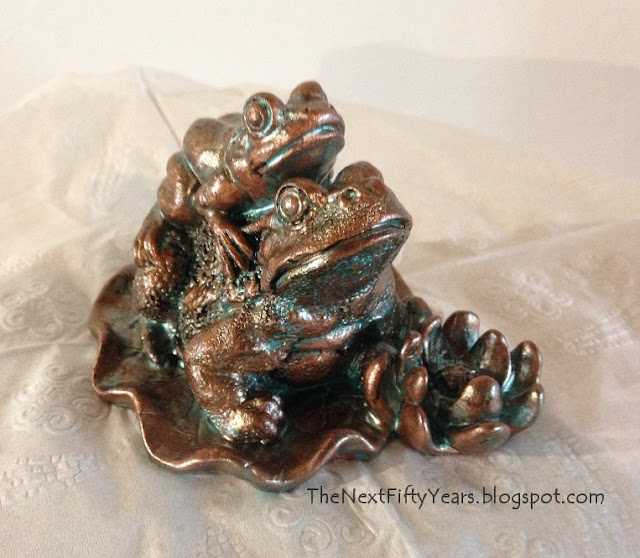 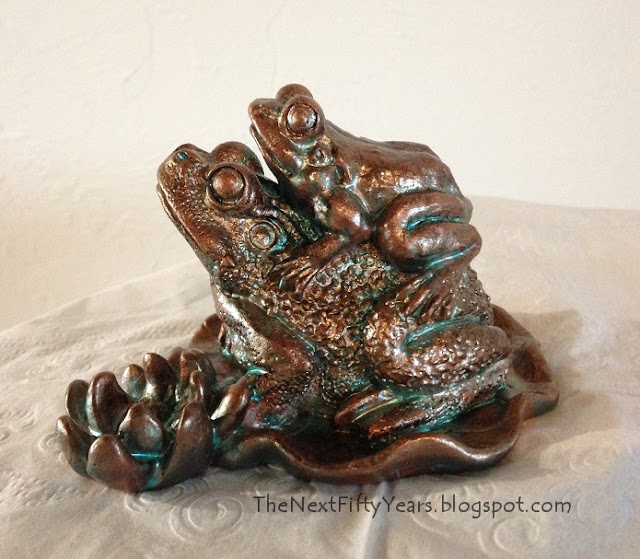 Linking to:
Creative Compulsions at My Bijou Life

By Marti at 16 January 9 comments:

I thought I would do something for week 3 that makes a big difference in my daily enjoyment, the living room. My living room is very small, half the space of the one in my last house. I've always heard that smaller spaces are easier to keep clean, but this one sure isn't. Not only is it a couple of feet from the back door, it is also just a couple of feet from the door to the garage. That makes two places that have become dumping grounds for anything brought into the house, or stuff that needs to leave the house. With half the furniture we used to have, the clutter creep has taken over everything except Hubby's recliner, and that's only because he dumps things on the floor instead of on the chair.

This week I need to haul off all the stuff we have decluttered and boxed up for a charity shop, and find a place for all the stuff that has come into the house only to land just inside the door. Some of it goes into cabinets that haven't been built yet. In fact, some of it are parts for cabinets that haven't been built yet. So finding a place for it will be a real challenge.

What about your living room? Is there a place in it that seems to attract clutter? Have you got a plan to deal with things that come inside the house or need to be taken somewhere? 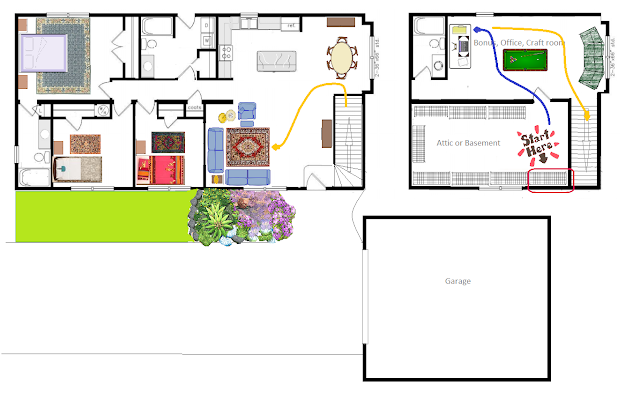 This week's mission is to tackle that mountain of paperwork I've been avoiding. It may be making a system for paying bills, or filing, or just sorting through that big pile on the desk. I normally pay bills and deal with paperwork at the kitchen table, and my "In" folder is on an antique desk beside my bed. I said antique desk because it's not much of a desk. No drawers, just a small, fold out top, which isn't convenient. I have a desk in the attic, but somehow, it has become the dumping ground for any and everything office related. It is the mountain I want to reduce to a mole hill this week.

How do you control your paperwork? Do you have a system that works so you don't end up with a pile you dread going through? 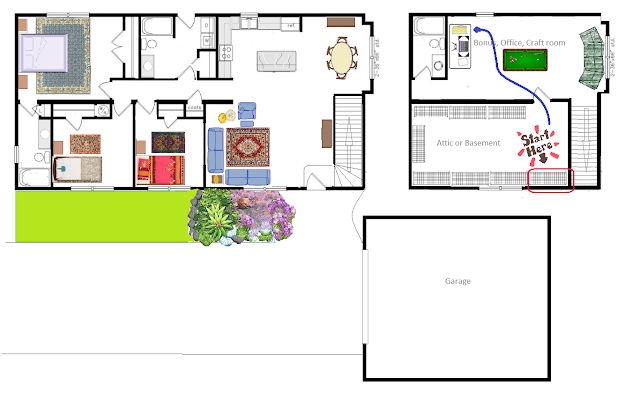 By Marti at 08 January 2 comments:

I started a declutter challenge on a facebook group and thought I'd share it here too. I am determined to get my house finished and livable in 2020 and that means NO CLUTTER.

We're starting with storage for week 1. Specifically, Christmas decoration storage. Whether it is in the attic, like mine, or in a basement, or in a closet. Now is the time to get all those bins and boxes together and organized to make it easier as we start taking down our Christmas decorations. It is also a good time to cull through the ornaments and other things that are broken or we no longer want. 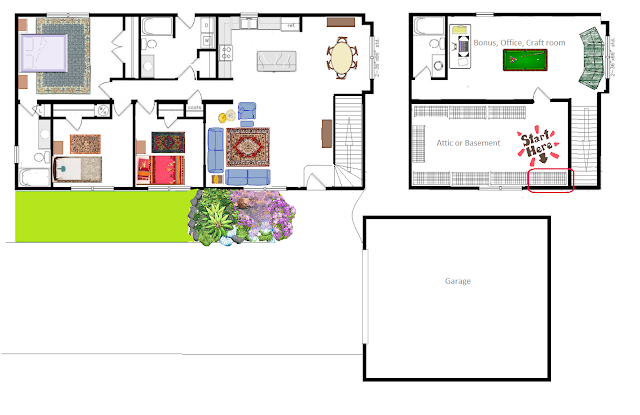 Post your tips, strategies, or successes in the comments.

By Marti at 01 January 2 comments: