We expect our first freeze Thursday, so Hubby and I went out to the farm to winterize my water lily tank. 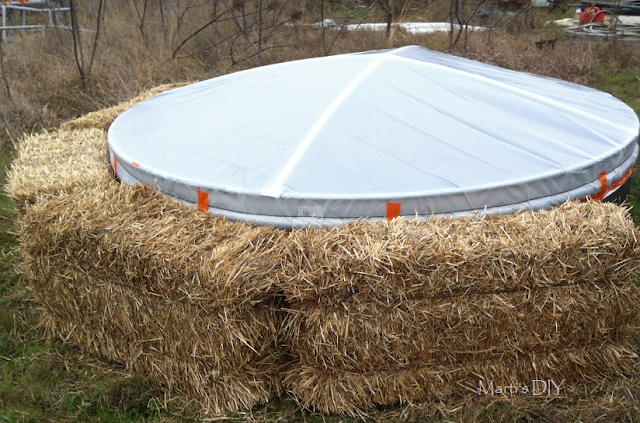 While we were at the feed store buying the straw bales, Hubby picked up a sack of corn to fill his feeder. After filling the feeder, he noticed the neighbors who had come begging for a free meal. So he fed them.

The other neighbors were just as vocal, just too far away. I took these photos with his phone, fully zoomed, but they were just too far away for a good picture. I included them anyway because a) they had an impressionist look, and b) this is kind of how my vision is. Just enough distortion to be kind of pixelated and blurry. 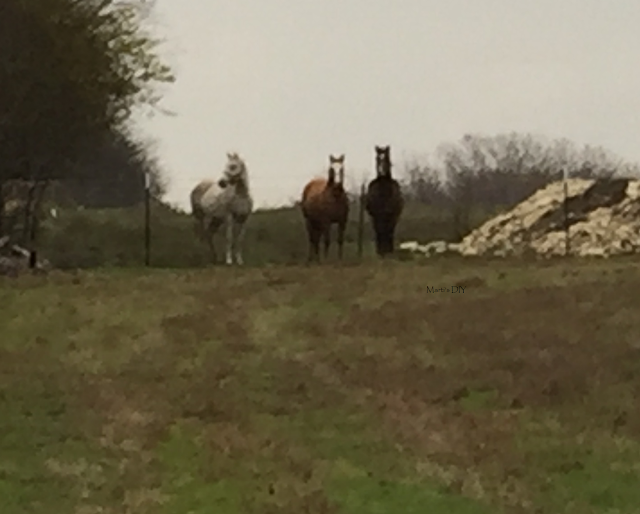 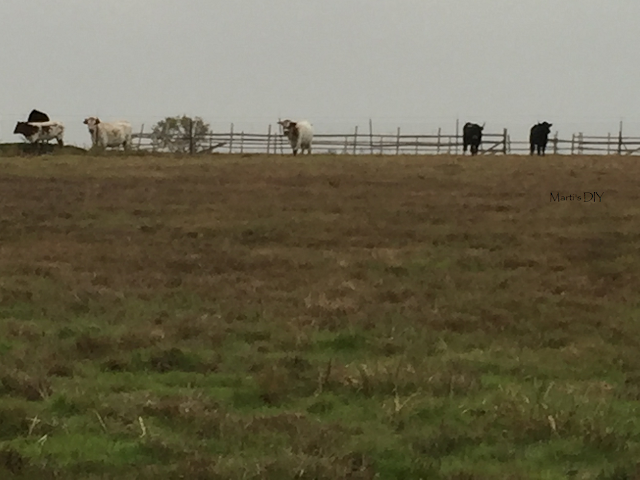 By Marti at 06 December 6 comments:

Is No News Really Good News?

If so, have I got good news for you.  Because really, I don't have anything new to add here.

I am delighted to say that summer is finally over and the weather is terrific.  We finally closed on our land the Friday before Thanksgiving.  We had hoped to be able to get the building ball rolling immediately, but we've had delays here just as we had with both closings.

Even though I have more free time now, I have less internet time.  We couldn't use our last internet provider here and didn't want to sign a year or two contract for another one, so thought we'd just use the hotspot on our phones.  We burned through six gigs in just a few weeks.  We just bought a dedicated hotspot last week and started with six gigs.  I went to the library to read blogs and compose my answers and blog post and came home to post it.  Hopefully, that will work for me without using too much data.  It is a pain though.  I don't log into anything on the library internet.  It may be safe, but I'm not 100% sure about that.

Since we are living in such small quarters, I packed all my fabric and most of my quilting tools.  I did bring three sewing machines here because I didn't want anything to happen to them in storage.  I also brought my English paper piecing because it takes up so little room.  With my eye problems, I didn't think I'd be doing any kind of sewing though.  However, I found that the hand sewing is much easier to see than using the sewing machine because I can get it just the right distance from my eyes.  I can even thread a needle without too much effort.  I've been spending time every day working on my hexie project. 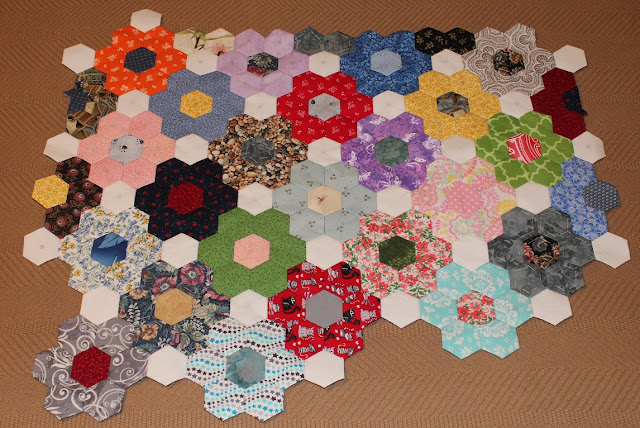 It is cat approved too.  Buddy has decided he likes being a house cat, and loves being a lap cat every evening.

I don't remember what I last said about my eyesight.  So a short review: I've had a retinal tear in each eye and now macular pucker in each eye which causes a blurry distortion even with glasses.  At my last visit, the doctor said the puckers were progressing rapidly and recommended surgery.  We left believing that without the surgery, my vision would continue to deteriorate until I couldn't see anything without this fairly risky surgery. His diagnosis seemed to prove correct as over the last month, I've noticed that it is harder to read signs while driving and even to identify things on the side of the road.

So today, I went to another doctor for a second opinion.  Another reason I wanted to see another doctor is because the first doctor doesn't explain anything and I wanted to know exactly what to expect.  This doctor not only explained what was going on, he showed me the pictures of my macula, and explained that, for me, this surgery is risky because it actually would be three separate surgeries.  Also, he said that the surgery probably wouldn't do anything for my right eye and only slightly improve the vision in my left eye.  One line up on the eye chart, he said.  Not enough improvement for three surgeries.  He didn't recommend surgery right now.  Good news though; he said even if the macular pucker continued to get worse, it wouldn't cause blindness, and if it did get a lot worse, then we could do the surgery.

In the meantime, he suggested an optometrist who might be able to tweak the refraction with glasses so I can continue to drive and read signs and maps.   I'm not putting a lot of hope in that, but it is encouraging.  We learned more in fifteen minutes with him than we had in ten months with the other doctor.

By Marti at 02 December 5 comments: