The days are beginning to run together, and we are making slow progress.
HVAC ducts installed. 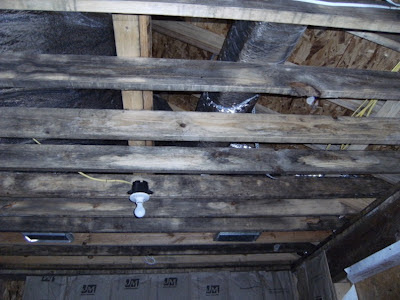 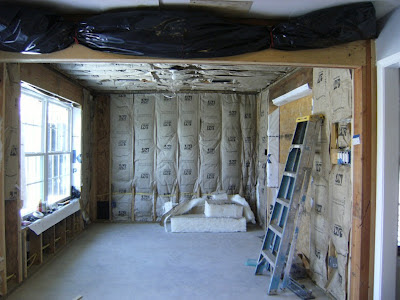 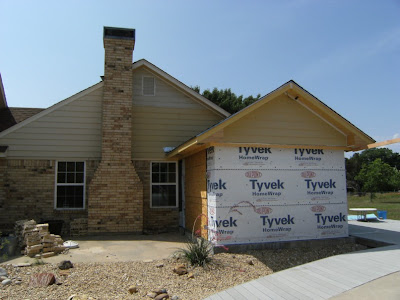 I've also been working on the refrigerator cabinet. It's stained with one coat of finish. 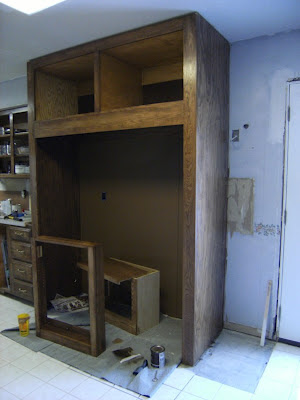 And working on the endless string of cabinet doors. The inspector is supposed to come back tomorrow, and after that, all work stops until after the wedding (our daughter is getting married).

Thursday evening, after hearing that rain was on the way, Hubby put up the siding on the gable. It rained, but nothing too severe and the only leaks were around the back door - as usual. Saturday, the electrician came and got all the wiring done. We've got a switch to the kitchen and living room near the back door for the first time in three years. Yay!

Also Saturday, Hubby started taking out the back door so it could be re-installed. When the door was out, he saw that the slab was especially uneven in that spot (no big surprise there) which allowed water in and prevented it from running back out. So he used a grinder to level the foundation, filling the kitchen with concrete dust, and I just happened to be staining the refrigerator cabinet at the time. Someone told me that living in a house that is under construction is like living in a garage. So very true.

No pictures of the door as it didn't change the look any.

Another fun thing Hubby did was to spray an encapsulator on the wood in the room. The wood has a lot of dark places on it, and is probably just from exposure, but we wanted to play it safe in case there was any mold there too. 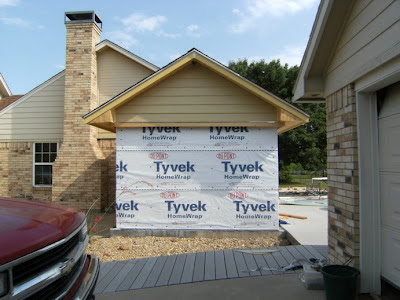 Last Tuesday, the inspector came. Yay! But he didn't approve the framing. Boo! He wanted some additional bracing done and the electrical and a/c vents done first. The city secretary said the inspection was to come after the framing and then again after the electrical. So now the bracing is done and we're waiting for the electrical. Our temps were in the 90's on Saturday when Hubby was doing the bracing and it was over 100 in the attic. Not a good time to be up there. But we're supposed to have a cool front for the next few days so maybe the electrician can get over here before it gets hot again.

Even though the roof is really small, Hubby wanted professional roofers to tie in the old and new, and they came Thursday. A crew of seven spilled out of a van, and had it done in an hour. They used an extension ladder and I told them not to put it on the deck, but they did anyway. They did put a bundle of shingles at the bottom to keep it from sliding, but one of them almost fell when he missed a step. I couldn't watch. I had to go inside. 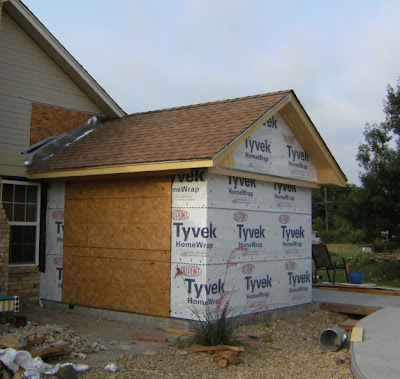 Friday night there were storms in the area, and while we missed out on rain, we were hit with some strong winds that took down trees and scattered some of our materials. The next morning, Hubby and I split up and walked down the street looking for our stuff. A roll of valley tin was found four houses down. I heard it banging around when the storm hit and it sounded like the house was coming down.
Also Saturday, our little town had a clean up day so we hauled all our construction debris over there and they helped us throw it all in a big dumpster. 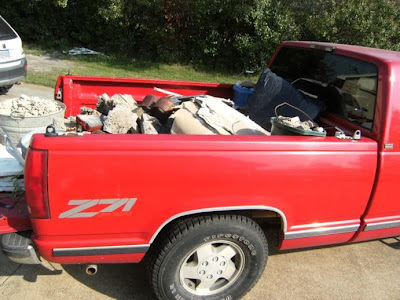 We still haven't heard back from our bricklayer, but we have time to line up someone else since our brick won't be here until June. I'm still cleaning our old brick and found that it is much easier to clean after soaking in a tub of water for a few hours.