Our foyer somehow became the dumping ground for homeless items after the water leak. My goal last weekend was to empty the foyer, find places for these items, and remove the baseboard and crown molding so I can paint before new flooring. 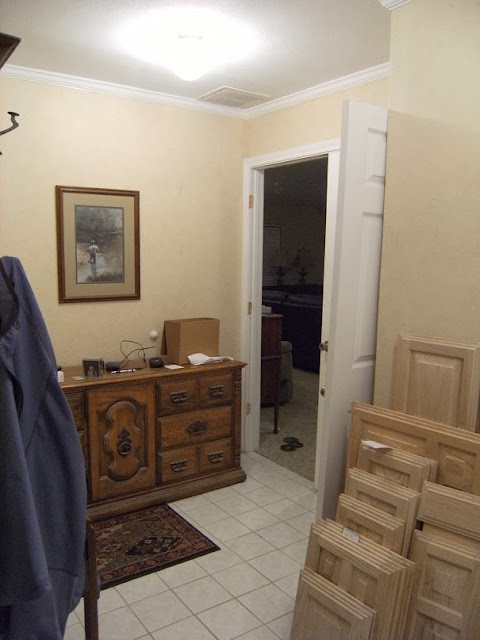 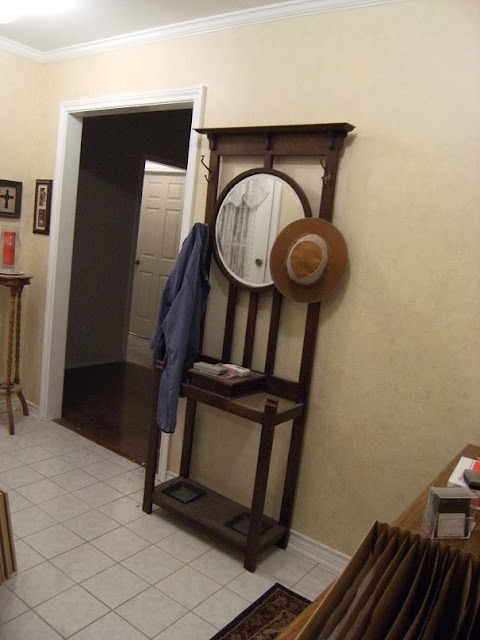 I got most of it done Saturday, but Sunday Hubby called. He had been at the lease in the beastmobile and the belt broke when we was about an hour away from home. In fact, two belts broke. He had an old spare, changed it, drove about two miles and then it snapped too. The worst part was that it was cold Sunday. We were under a winter storm warning, with freezing rain predicted. But he called a tow truck and I met him at the repair shop, transferred all his stuff into the car, and brought him home.

So this is as much as I got done. 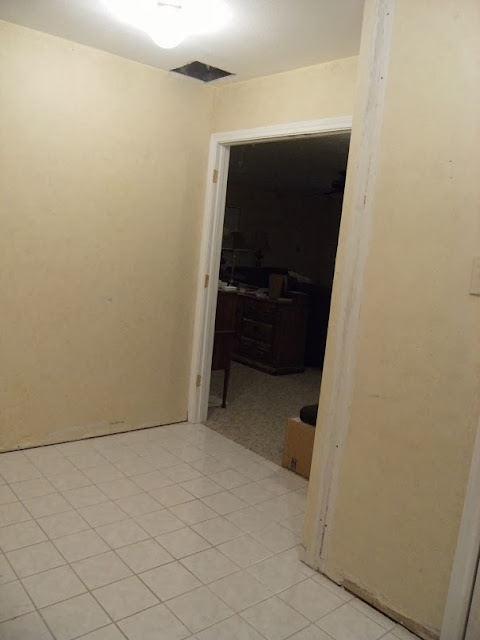 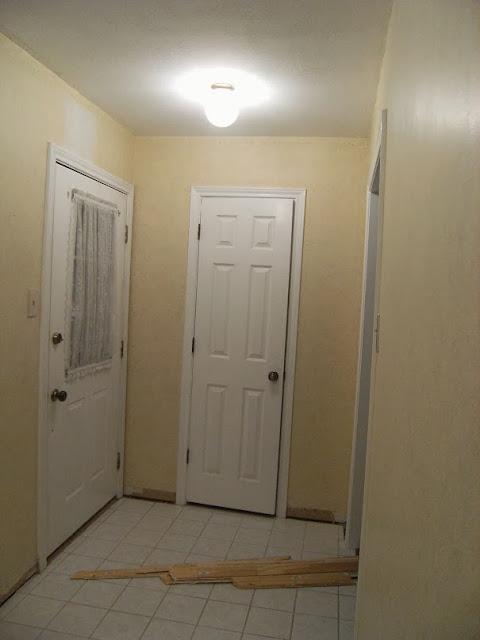 Ripping off the framed tapestry popped a sheetrock joint, so now I get to fix that. Then paint, and finally floor! 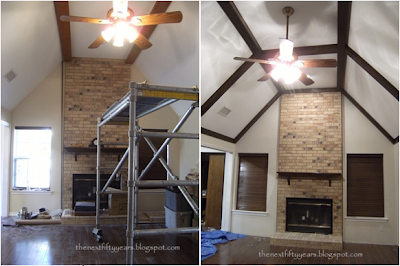 If we EVER again consider buying a house with a vaulted ceiling, I hope someone does an intervention.

But now it's done and we are that much closer to getting flooring installed. 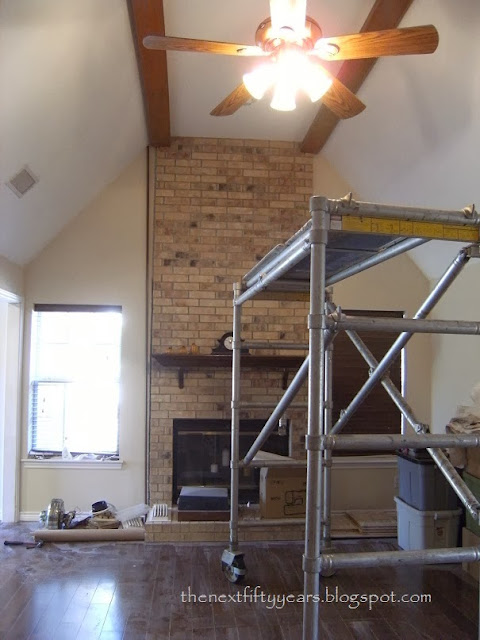 To recap, we originally had railroad track beams (fake beams) running the length of the ceiling. We always thought we'd put stained wood on the ceiling, but with a wood floor, it was just too dark. So we opted for side beams.

First, we (as in Hubby), pulled the bottom board of the beams off the ceiling. They were originally constructed like this: 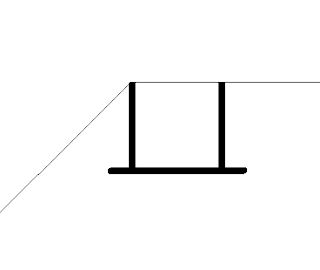 There was a one inch lip on each side, which did nothing but collect dust and provide spiders a place to live. Plus, it was hard to paint the ceiling around it. So Hubby trimmed them to be flush with the sides, not an easy task as one of the "beams" was bowed badly. While the bottom was off, I refinished the sides of the beams. By the time I finished, I was almost comfortable working on the scaffold, but a rail on both sides would have been handy. I refinished the bottom piece in the garage before we put it back up.

Then we looked at a lot of pictures of similar ceilings with side beams and Hubby thought it would look best with two smaller beams on each side and the center. But it had an unfinished look to me, like the ends were dangling, and I coerced talked him into putting two more on each side to anchor each end. We thought that would all be work that could be done on the ground, but all the nail holes had to be filled and then a final finish coat, so my scaffold work continued. 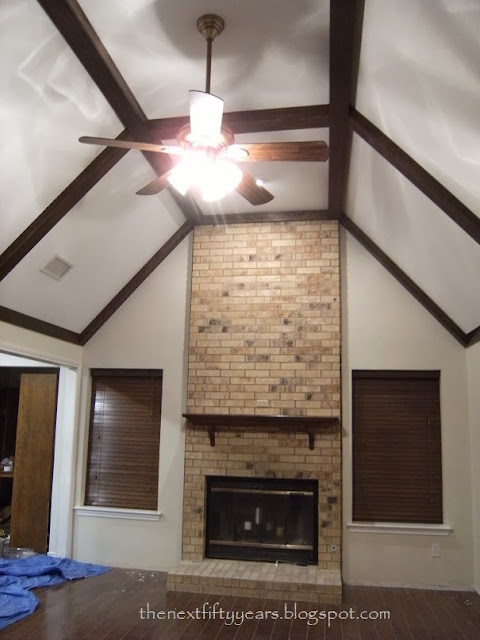 Then a little touch up paint on the ceiling and we were ready to paint the walls. I wanted to go with a blue gray, but it just didn't look good, so we went with a trusted neutral, Antique White.

There is a little trim work to be done, plus the baseboard after the flooring is installed, and then comes the fun part: decorating.

It's Just the Beginning of November, Right?

The rate I'm going, I'll be doing good to get a tree up by Christmas Eve.

By Marti at 12 November 5 comments:

Since the cat decided to live with us a couple of years ago, Hubby has referred to him as "your cat". As in "your cat needs to be fed," "your cat made a mess in the garage," "your cat is so goofy." Of course he feeds the cat, pets the cat, and even has a chair next to his chair in the office for the cat. He has caught himself several times before calling the cat his cat, but the other day he finally slipped and said "my cat nearly fell off the chair when I was petting him." Ha! Gotcha!

By Marti at 08 November 8 comments:

Follow my blog with Bloglovin
By Marti at 07 November 4 comments:

This morning I put on clothes without paint on them. It felt odd actually. I went to a carpet store to price some carpet for the bedrooms and then the grocery store. Didn't lift a finger at the house.

Back to the grind tomorrow.

Just a Sentence and Photos

I've missed blogging. I think of things I should document but I've been so busy it's hard to find time to compose a blog post. But I had a thought today, that I didn't have to write a story, or even in complete sentences. Just a sentence to share what's going on. My goal is to post every day for the rest of this month. It may be just a sentence and photos. Or just a sentence fragment.

Making progress. Today I finished fixing all the cracks above the doors in the hall, and sprayed the texture. Now all the walls are covered with texture. And so am I.

I should have taken before pictures, but I didn't think of it. I didn't think of taking after pictures until I had already taken down some of the tape and plastic. I hate the prep work. Sanding, cleaning, taping. So much work just to be able to get to work.  (Yes, that door at the end will be painted.) 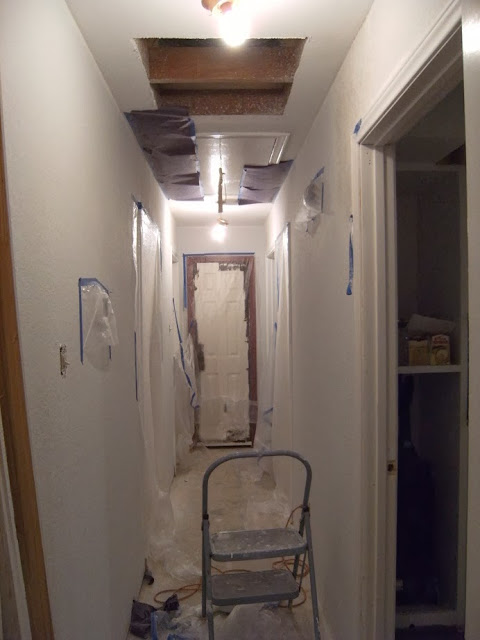 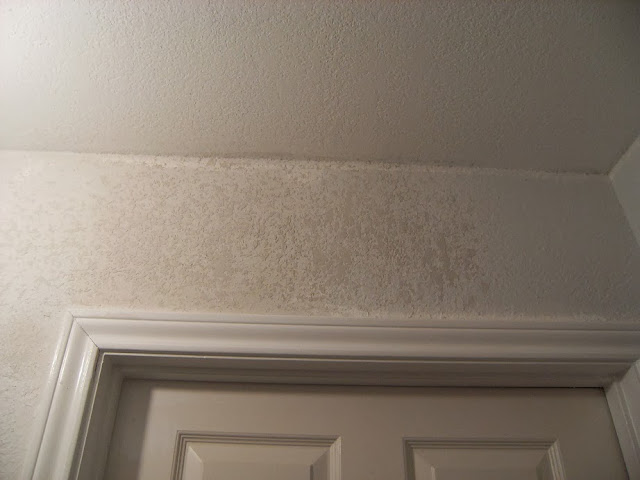 This corner had been messed up by someone who previously textured for us and didn't bother to take off the door trim. It looked like the wall was crushed, but it was just texture that had been smushed between the door frame and corner. More prep work. Take off the trim, remove nails, remove tape and mud, replace tape and mud (smoothly this time). Finally, texture. 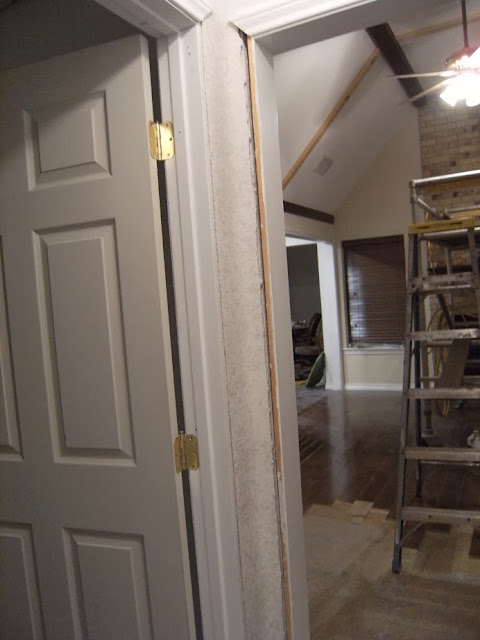 By Marti at 04 November 4 comments: