My First Train Ride, a Trip to Rusk and The Texas State Railroad 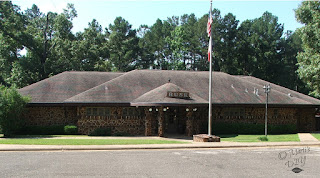 To celebrate our 40th anniversary, we bought tickets to ride the Texas State Railroad which runs between Palestine and Rusk, Texas. I bought tickets online and chose the round trip beginning at Rusk.

You probably know by now that I love funny signs. Here is another, in another small town. 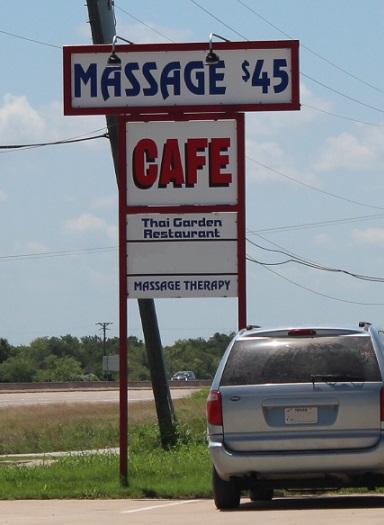 I guess that's one way to fill all the empty tables. But I just lost my appetite. 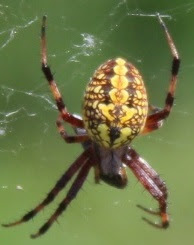 Small Texas towns, once known for their quaint charm, are rapidly changing. Little stores are torn down to make way for strip malls that house the same chain stores as large cities, streets are widened from two lane to five lane, and stop signs and traffic lights are on every corner. Yet, there are still signs of the unique personalities that make small towns unique.

No miniture dogs in purses here. These people brought the pet goat into the store. (And no, it wasn't house broken.) 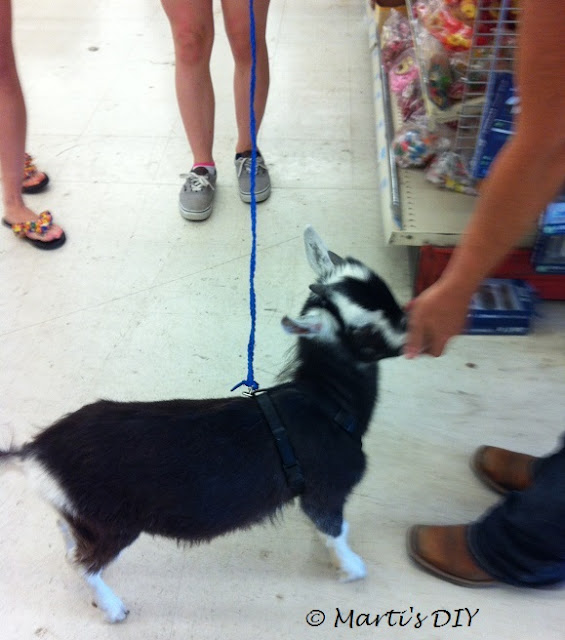 Someone once said this about Texas towns: "A chicken in every pot and a pickup in every driveway." I don't know about the chicken, but it does seem like there a lot of pickups, and the bigger the better. 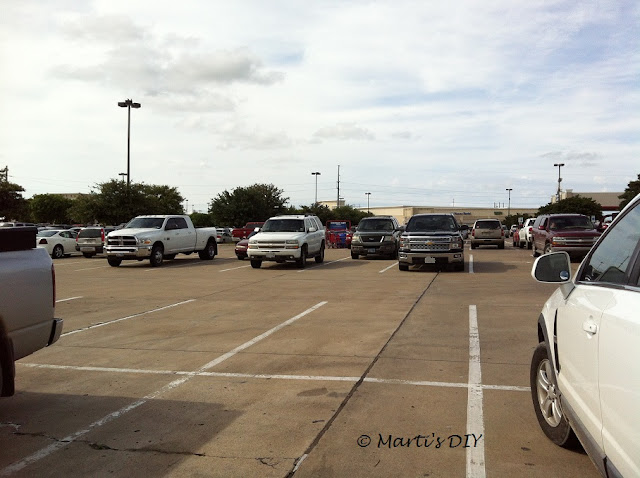 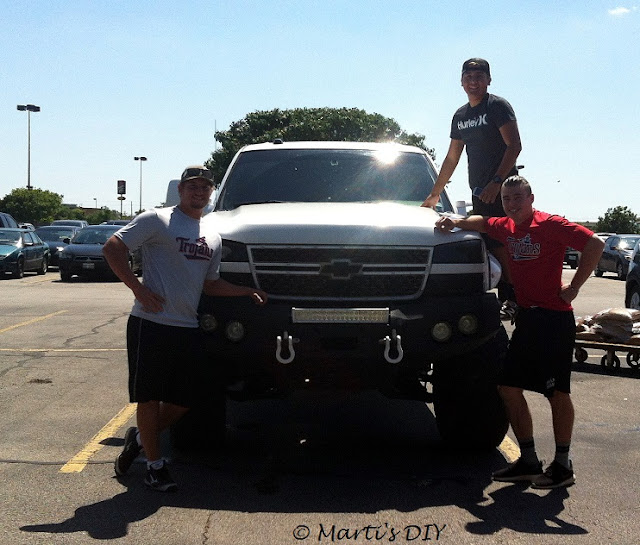 City professionals call it diversification. Small town entrepreneurs call themselves a jack of all trades. 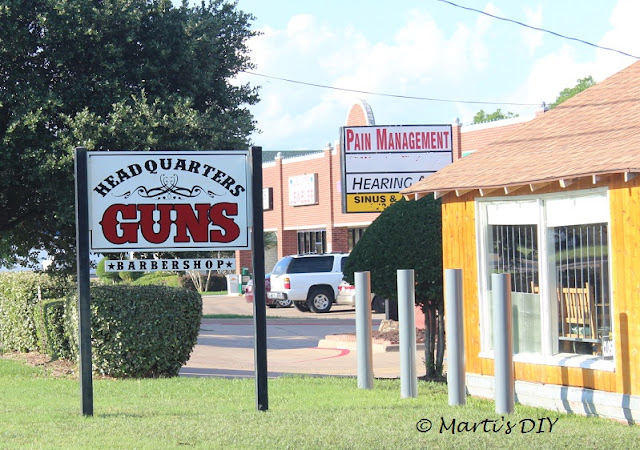 A tricked out car, Texas style. 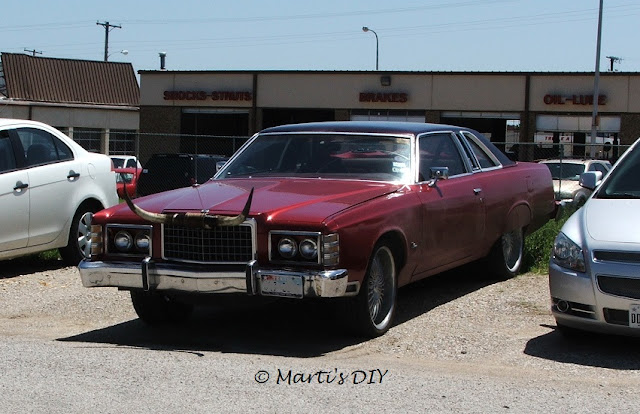 I hope something here made you laugh, giggle, or break into a smile. Have a great weekend. 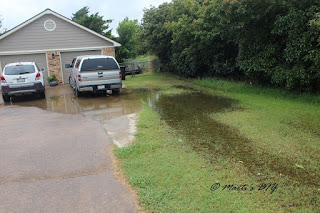 When I woke this morning, it was raining as Tropical Storm Bill made it's way through Texas. I hate to be churlish, since I said just two weeks ago that it would be nice if the rains were spaced out every few weeks instead of all at once, yet, I groaned to think of more rain just now. Our ground was dry, at least for the first two or three inches, but under that was still waterlogged. So it was no surprise to see Lake West fill our driveway. West is the name of the company who built our driveway, and not often thought of kindly here.

We had planned to have that drainage swale redug as soon as we could coordinate with another neighbor and the landscaper. But after looking at it today, I wondered if it would be a good candidate for a rain garden. Why send the water on down the street when it could be used here? Something to think about. The only real problem there is that we have to be able to drive through the gates beside the house.

But back to this morning. Since it was raining and no need to rush out and work in the yard at the crack of dawn, I slept in until 7:30. As I made my way around the corner into the kitchen, I smelled the stink of something rotten. The meat wrapper from last night's steaks, I thought. But no, those wrappers went into the garage trash. Maybe someone forgot to scrape their plate and there was something in the drain. No, not that either. I cleaned the sink anyway and poured some bleach down the drain even though that is not good for the septic system. That worked. For about five minutes. And then the smell was back. And it seemed to be stronger in the laundry hall.

I began to think it was under the washer or dryer. This isn't the normal time of year for mice to seek refuge in the house, but I did mow down the meadow a few days ago, and rodents have been known to run out of there in front of the mower, not that I saw any this time. The only wildlife evident there were the chiggars that attached themselves to my legs, feet, and ahem, other parts. It was time to play my least favorite game, "Where's Wally Dead Mousie" as soon as Hubby was home to help pull out the washer.

If you've ever experienced a dead mouse in the house, and heaven forbid, in the walls, you know that the smell starts off as a soured, rotten smell, and then gets progressively worse until you can't stand to be in the house. We have taken walls apart before looking for the little varmit, and I was not looking forward to that. I groused at the cat, telling him he wasn't doing his job as the mighty mouse hunter. He gave me one of those typical sardonic cat looks, with eyes narrowed to slits, which said that it served me right after locking him in night after night.

I washed all the laundry, in case it was our mud and sweat-stiffened yard clothes still drying on the floor. That wasn't it either. Finally, Hubby found the culprit, a pan I used to steam broccoli. I thought I had washed it and set it on the burner for today's lunch. Apparently not. That cleaned, the smell was gone. Disaster averted. I should apologize to the cat, but it would only go to his head, so I won't. 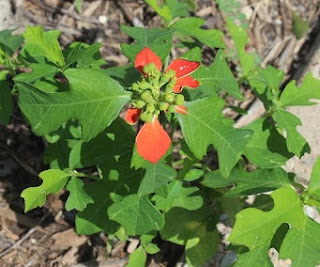 I hesitated to post this, or at least to join the linky party at May Dreams Gardens, because I thought that was only for blogs dedicated to gardening. And maybe that is the intent. But after seeing several links from bloggers like me who cover a lot of ground, I decided to join. so here is what is blooming in my garden today.

Turn of the Century Charm in Rusk, Texas 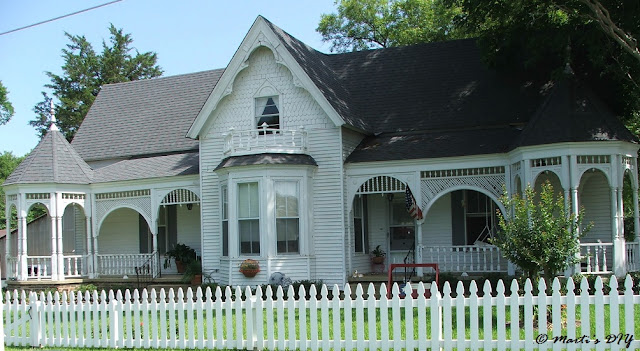