Here's the deal.... I would love for you to pin my photos from my Marti's DIY blog or my Pinterest albums, unless a post specifically asks you not to do that (because they may not be mine). If you want use my photos for any other purpose, please email me first. Most of the time, I am happy to oblige. The written content on this blog belongs to me and may not be published, copied, or reprinted without my written consent. When you visit other blogs and websites, please pin responsibly - with permission. Thank you for your understanding and consideration. You're the best!
By Marti at 31 July No comments:

Hubby shamed me into sitting down and writing a post. I've been trying to take pictures every so often, but I just haven't taken the time to crop them or compose anything to go with them. He told me I was the kind of blogger he deleted from his blog list. So I guess he has deleted mine. lol

One mood slump, and one trip to the emergency room later, I'm finally getting back to updating. For those of you who haven't dropped me from your blog list, I'll try to do better in the future.

When last I left my tale, we were ready for brick outside, and sheetrock inside. So I'll start with the brick. Hubby and I went to several brick yards and called many more, only to find that no one could get any brick even remotely resembling ours. Our options were to buy brick that was all yellow/tan or buy anything the same size and then paint the whole house. We chose the first option, thinking we could use some masonry stain and match our brick.

The day before we left for the wedding, I heard a semi rumbling outside and looked outside to see a forklift with a pallet of brick rolling down my driveway. When he started lifting the second set of brick, called a strap because it wasn't a full pallet, one of the straps broke and I heard brick hitting the pavement. By the time I got there with the camera, the guy had the brick off the street and the broken pieces in the middle of the stack. I wouldn't know until we began staining them that there were twenty broken brick. 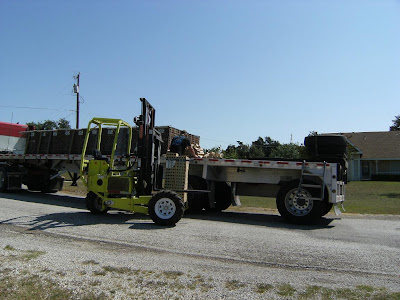 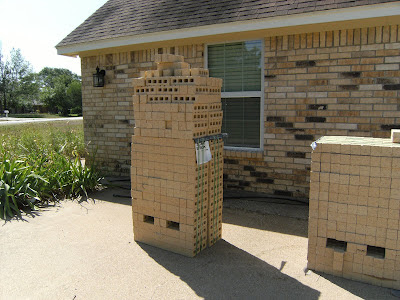 The brick on our house looks like it is solid yellow/tan with some brick that have red or brown sprayed or dabbed on. When we got back from our trip, Hubby used a spray gun to stain a small amount of red and brown bricks. They matched the color, but they looked too new compared to the older brick. We hoped that they would look better once they had some mortar scraped across them. The ratio of yellow : red : brown was about 10 : 4 : 1, so we put stacks of brick in those proportions on the three sides of the addition to make it easier for the bricklayer.

The first day, he did the corner where the addition tied into the old house and used the old brick I had cleaned. We had decided to start the new brick on the other side of the patio door, and he began that on the second day. After lunch on that second day, Hubby and I went out to look at the brick and found that he had not spaced the brick the way they were on the rest of the house. Instead of doing a 10 : 4 : 1 ratio, he had done a 2 : 1 : 1 ratio. When he ran out of red and brown brick on one side, he went around to the other sides to get more. We asked him to space them out the way they were on the rest of the house, and he did, but it was too late. The bottom 3rd of the addition looked like a checker board.

Also, he ran out of brick on the last day. I don't know if he broke more than expected, or we just mis-figured. In any case, we were one hundred bricks short. I finally located a brick yard that buys odds and ends from brick layers, and they had some brick that would work. It had a tumbled and sanded front, but the back had a similar look, but a little darker. The bricklayer said to get one hundred and twenty five just to be safe, so I bought one hundred and fifty.

We tried to scrub off the stain where it looked like a checker board, but it wouldn't come off. After looking at it for a week and getting more and more annoyed by it, I decided to stain almost all of the yellow bricks with the red. There is still more brown on this section than the rest of the house, but at least it's not a checkerboard. But then I had to do the whole house. That's a subject for a different post. But here is the bricked addition. 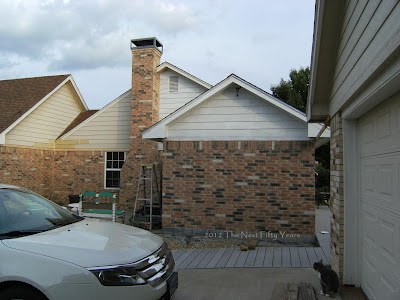