I know there is a stitching linky party with that name, but that's not what I mean here. I have friends that I've known for years, some from grade school. We go on trips together every year and try to get together for a weekend here and there too. Friday night, one of them started a group text that went on for a couple of hours. It was so much fun and was almost as good as being together. Thanks to autocorrect, we added a few new phrases to our store of private jokes too. If you ever hear someone say they had a paucity attack, you may get to meet me or one of my friends. What is a paucity attack? Well, it could be that stressed feeling when you open your mouth to say something, and the words just aren't there.

I haven't been doing much of anything for the last week. I've been taking it easy, although I did put up a little insulation. It's been hot here and the drought continues. Farmers around here are baling everything over two feet tall, and cotton is shriveling in the fields. This morning, it looked like a big storm was headed our way, but just south of Dallas, it stalled, backed up a little, and then moved east. We got a little outflow wind, but not a drop of rain. August is generally a dry month, and usually the hottest month, so I don't expect the drought to end any time soon. I just hope we get some relief in September.

Last Thursday and Friday, I had some thyroid tests but no results from them yet. On Friday and Saturday, I felt better than I have in a long time. I wonder if the slight amount of radioactive iodine had anything to do with that, or if it was the green smoothies and healthy diet? Whatever it was, it's gone now. But we did eat birthday cake all weekend (Hubby's birthday) and that is never a good thing.

Hubby is an auction nut. But not in a bad way. We used to go to live auctions a lot, but now he does most of them online. Thursday afternoon, he got a notice for an appliance liquidation auction. We looked at it, and it was an auction for high end appliances like Viking, Asko, and Bertazzoni. It was ending at 7:00, just a few hours away. No time to go preview the appliances in person, only by the photos online. We talked it over and decided to roll the dice on a few of them. We were high bidder on an Asko dishwasher, a Bertazzoni induction cooktop, and Viking oven, warming drawer and vent hood.

We picked them up Saturday but didn't get to inspect them until we got home. They were all unused, but some were several years old, and there was a reason the store was auctioning them. We just had to find what it was on each one and see if we could fix it. The dishwasher worked perfectly when it was plugged in. It is white though and that may be why it was at auction. I can deal with the white later. The cooktop is an older model and has a scratch on the top corner. Works perfectly though and began boiling water immediately. The vent hood has a dent on one side but I think it will be covered by the cabinet next to it. The oven and warming drawer both had problems opening and the warming drawer is blue. The oven's problem was a stripped screw so will be an easy fix. It worked fine when we plugged it in. It is an older model but that's exactly what I liked about it. The warming drawer's frame wasn't attached at the bottom. Once that was attached, it opened right and worked fine. And since Hubby works in the business, he can easily get the front powder coated to match the oven. Total cost was $1368. I'm stoked.

Today's agenda includes tackling Mt. Laundry, and cleaning the trailer, anything to put off the pile of paperwork on my desk. Or maybe I should do that first and get it out of the way before I start cleaning? Or maybe I should ignore everything?

You probably figured that out already though.

I'd like to say it's because I've been so busy building and farming, but that's not the case. I've just been tired, tired to the bone as they say. I've been tired for a long time but it's been getting worse the last few months and the heat makes me wilt like a cut flower. Then, I started feeling weak and shaky and decided I'd better get myself to the doctor for some blood tests. Turns out, I have hyperthyroidism. As the PA said when she called, my numbers were off the charts. Well, no wonder I didn't feel good! I need to see an endocrinologist next week and then decide a course of action.

In the meantime, I'm drinking kale and spinach smoothies three times a day to try to lower the amount of hormone the thyroid produces and hopefully reduce some of the symptoms. 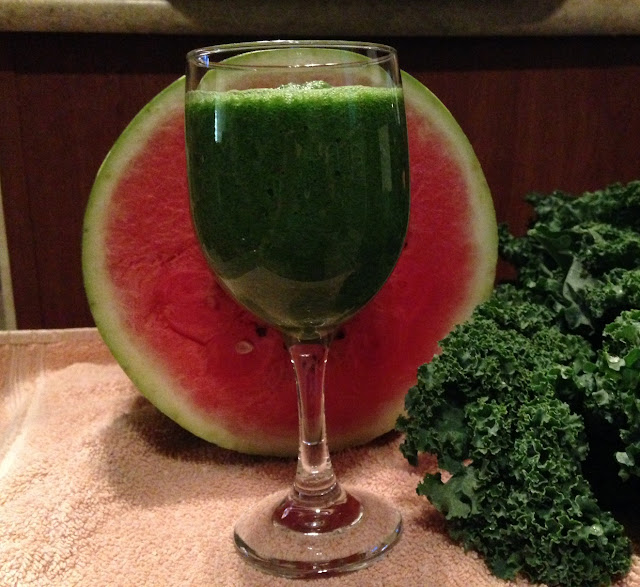 In front of the watermelon, it looks pretty good, and I can almost drink the whole glass before my tongue refuses to taste anymore. It kind of smells like fresh cut grass. I've never eaten grass, so I'm not sure how the taste compares. A few more days of this and I'll be mooing with the cows next door.