The past week has been spent tiling the backsplash in the kitchen and changing out electric outlets. Between thinset and grout drying, I've also been putting up Christmas decorations. For those of you who have a basement, go plant a big kiss on it the next time you are down there. Basements are not common in our part of Texas, so our only storage is the attic.  Pawing through unmarked boxes containing everything from Easter baskets to Christmas ornaments was enough to make me scream - and it wasn't just from standing up and hitting my head on a beam. Our garage attic is five feet 4 inches only at the very center so looking in unorganized boxes and bags is both frustrating and back breaking.  (Feel free to give your basement two kisses.)  After searching for thirty minutes with nothing to show for it, I decided to spend the weekend working on the attic.

Of course I didn't take a before picture of all the attic. It wasn't until I had done half that I thought to take pictures. It was a jumble from one end to the other, mainly from our "shove it up there now, put it up later" summer behavior. It's just too hot up there in summer to spend much time searching for a place to put anything. Hopefully, that will be easier now.

On one end of the attic, decorations on one side, sorted into tubs by month and arranged chronologically. 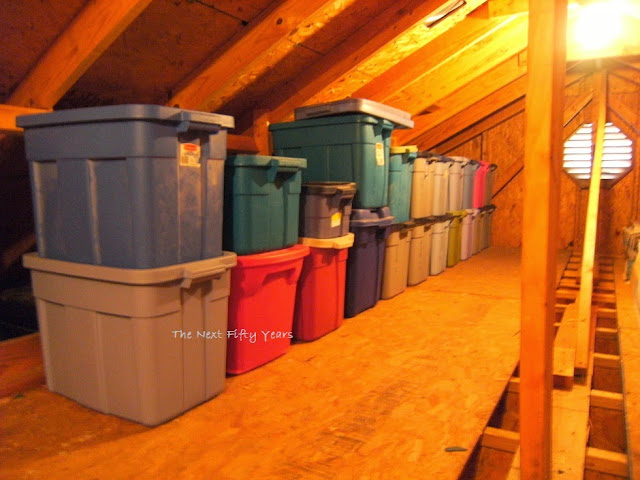 Family heirlooms and other non-useful things on the other side. I built some shelves (out of scrap wood of course) for some of the smaller items we'd like to be able to find easily and when it's filled, I'll cover it with a clear dropcloth. 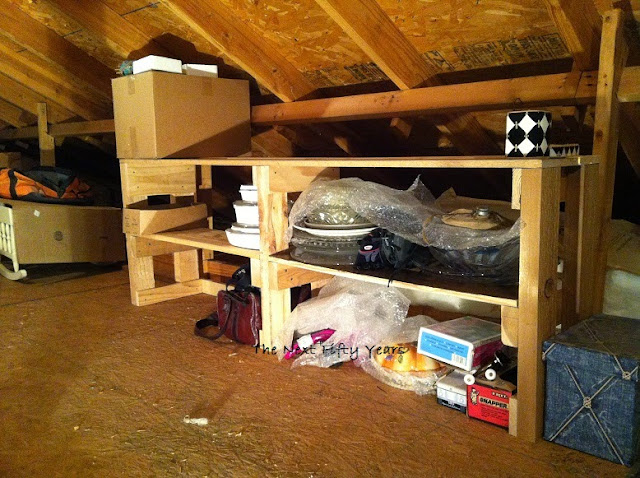 Next, the other end of the attic, which is still a jumble much like the whole thing was. More decorations that never got put up along with all our lawn furniture cushions and boxes of stuff the kids didn't take with them when they left home. That stuff may go home with them in a few weeks. 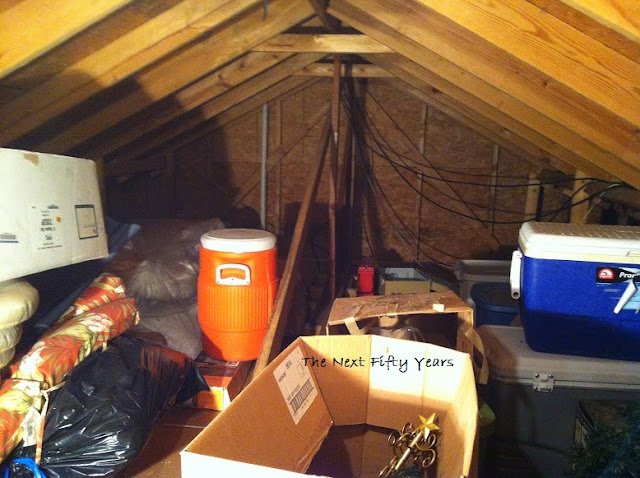 Feels great to get things out of the house where they had been stuffed into every corner. I feel like I am finally rescuing my house from the clutter we have shoved from room to room for the last fifteen years.

By Marti at 08 December 4 comments:

When I had my last colonoscopy, there were a couple of polyps.  So it was recommended I have another colonoscopy after five years.  I tried putting it off but even my internist started nagging, so two weeks ago, I finally had it done.  And today I got the results.

No polyps but diverticulosis and inflammation (I knew that right afterward though).  The results today were that biopsies were all negative (yay) but the inflammation and reflux is from celiac disease (boo).

I have suspected gluten intolerance from things friends have said before, but I never felt like I had an immediate bad reaction after eating something with gluten in it.  After the initial consult with the gastroenterologist where he prescribed cholestyramine, I started doing a little research and found that gallbladder disease is often caused by gluten intolerance.  I sooooo wish I had had a way to research before having my gallbladder removed but it wasn't as easy back then.  I absolutely wouldn't go that route now.  But it's done and now I have to live with the resulting problems.  But now I wonder if I haven't had celiac disease all along and that is what caused my gallstones.

Celiac disease can cause most of the problems attributed to candida, but then it also weakens the immune system so something like candida can take over.  Either way, it appears I will be on a diet that controls both.

So now the doctor wants to put me on a post gallbladder removal diet that will heal the gut and of course be gluten-free.  It sounds really restrictive for awhile.  And right before Christmas too.  Great timing.

After a while I hope to go back to a normal, or fairly normal paleo diet.  Hubby will eat most paleo recipes for meats and vegetables but he still craves his sweets, and quite frankly, so do I.  I've tried several paleo muffins and cookies that reviewers said were so good that non-paleo people didn't know they were paleo.  I beg to differ.  After 6 weeks with no sugar or fruit, even an apple tastes like quite a treat and a paleo cookie may be also, but to the tongue used to Nestle's chocolate chip cookies, a paleo cookie is pretty bad.  Since Hubby isn't going to go totally paleo, it would be nice to find a treat that would please both of us.  I know I don't have the will power to make his treats without tasting.  Maybe much, much later.

Another bump in the road for me is that coconut is one of the best things for healing the gut.  And I loathe coconut.  I hate the taste and the smell.  I can't even stand to be next to someone wearing coconut suntan oil.  So learning to tolerate coconut is going to be quite a challenge.

By Marti at 04 December 5 comments: