And the Winner Is

Krista at While He was Napping!

Check your email, so I can get a few details.

Congratulations Krista and thank you all for entering.

P.S. I jumped the gun on the drawing. I had it in my mind that I said Sunday, until I reread the post on Monday.

By Marti at 20 March

A Day Spent Outside 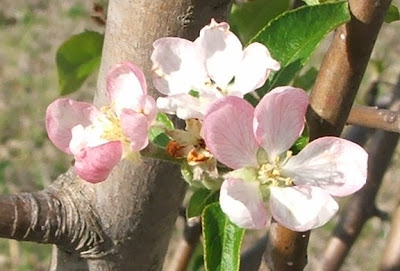 That sounds lovely, doesn't it? When I hear other people say they spent the day outside, I envision a walk around the lake, or even boating on the lake, cookouts, golf or tennis, something like that. Not a day of work. But that's what we've had today.

I began my day beheading errant dandelions and other weeds in the yard, then I moved on to trimming back brown leaves and dead limbs. The cat abandoned me and became Hubby's best friend when I started the riding lawn mower. He ran to Hubby and followed him into the shed, meowing and looking back at me. Not sure what he was telling Hubby, but it wasn't good. I've never heard a cat meow so much. If this cat isn't eating, sleeping, or being petted, he is meowing. Sometimes it's a whiney 'pet me' meow, but sometimes he just runs after us meowing. Hubby has started referring to him as his little gray dog. I also never knew that cats followed people around so much. Until we got him fixed, the cat spent most of his time sleeping or ignoring us. 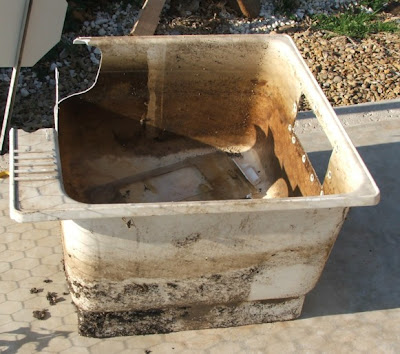 Oops.
The old one was made out of a utility sink, but it was a bit of a problem at times, so he ordered a new skimmer and it came in today. 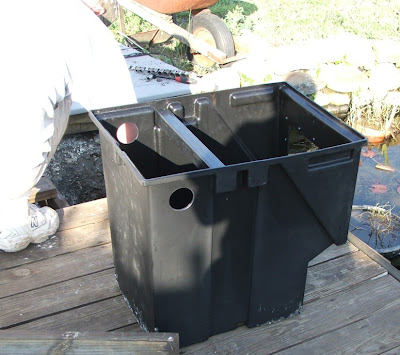 It goes in here, but it's a different shape than the old one, so some digging and plumbing adjustments had to be done first. 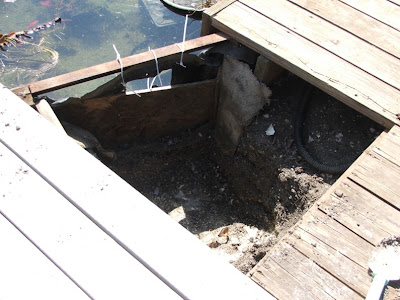 Hubby worked on enlarging the hole for the skimmer. I looked over one time, and saw both of them totally engrossed in the hole. 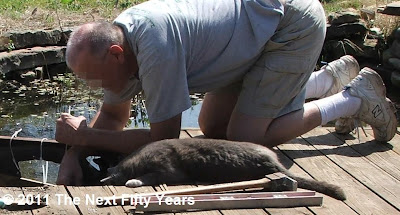 Earlier this week, one of our apple trees began blooming. Notice I said one? The other one was dead, and it takes two to tango, even for apple trees. So off I went to the nursery to get another tree. But not just any apple tree, it had to be a blooming apple tree of a different variety. I had called around and finally found a nursery that had a good selection of apple trees, and they thought there might be some blooms. The last tree they showed me was the only one with even a bud; I think it had two buds. Budding, not blooming tree - a Granny Smith. Sold.

I planted the new tree, and now we're waiting for the buds to open. It had better hurry; the biological clock on the other tree is ticking.

By Marti at 19 March

Sometimes, We Get Just What We Paid For 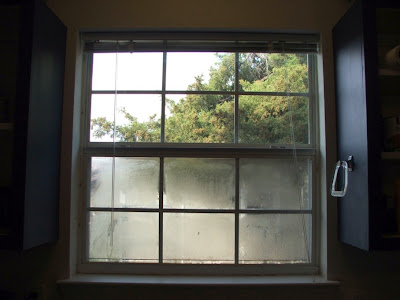 No, that's not frosted privacy glass. That is a window fogged with condensation. When we built the garage, we bought most of the materials at a big box store, including the aluminum insulated glass windows. On the rest of the house we had the original windows topped with storm windows, and while they worked, they were hard to keep clean between the two windows. We thought any thermal pane windows would be better than those. We were wrong.

The windows we put in the garage don't have a thermal break which separates the inside metal from the outside metal and keeps the outside temperature from transferring through the frame. As a result, on a cold day, condensation formed on the glass inside the garage, and ran down to the window sill causing mildew and some water damage. And this window is worse than the other two windows in the garage, not only is this window fogged, there is about an inch of water in the bottom! 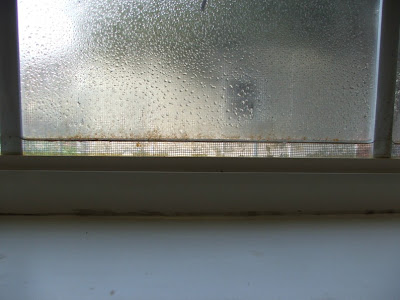 Hubby ordered a new window, hopefully one with a thermal break and better glass, and we'll add Replace garage window to our ToDo list.

Blessings,
Marti
By Marti at 18 March 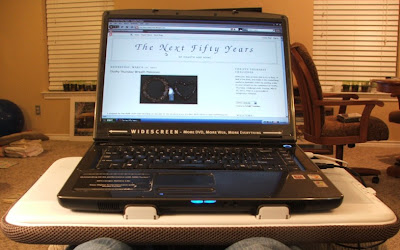 I want to tell you about this thing because it has made my life sooooo much better. My laptop gets hot, and it's not just the battery. Even with the battery out, this puppy gets hot. Too hot for it to ever be in my lap except on the coldest winter day and even then on top of a blanket or it would burn my legs. I used to sit in a chair with it on the table, and I noticed that it crackled the finish on the table top in that spot. I tried putting things under each corner so it could get air under it, and then it was too high to type comfortably. Plus, it made me sit with my back to Hubby while he sat comfortably in his recliner with his laptop in his lap. Even with the computer on a desk or the table top, the heat from it made me uncomfortable. Add a hot flash to that, and I was one miserable woman. Also, I had to replace the computer's fan this year because it overheated, and the tech said I was lucky I heard the sound in time and turned off the computer before something in it fried - only he used some technical geek speak that meant that.

I thought surely I wasn't the only one with a hot laptop, and I started searching for a solution. I found a lot of cooling pads, but only one with rave reviews about how quiet it is. It was pricey - compared to the others - but I bought it. It was about the same price as a new fan, and hopefully will save my computer. The fan in it is whisper quiet and it works like a charm.

It has a cushion on the bottom, so it's comfortable on my legs, and it has these two little tabs that flip up to keep the computer from sliding off, which is really nice when I have to move it to get out of the chair. You can see those in the top picture. 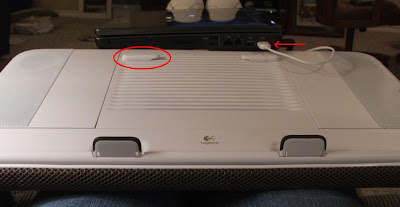 You can see in this second picture how it is powered by the computer and plugs into a USB port on the laptop. (with the red arrow) So there isn't another cord you have to plug in somewhere. And if you need even more air flow under the computer, it has little rubber bumper type things that pop into slots in the top. (with the red circle). It also has speakers, which I could do without, but there is an on/off button for them. There is also an on/off button for the fan, but I don't know why.

I'm not getting paid for this endorsement; I should be so lucky. I'm just so happy with this thing, I wanted to tell anyone else who is still suffering from hot-computeritis. As you can see, I am sitting in my recliner in front of the tv. Well, you can't see the tv, but it's there and the Ranger game is on, although they are getting smeared by the Padres.

Don't look at my junk back there - of course now that I said that I know you will. I have quilt blocks laid out on the floor, and pictures leaning against the wall that I need to hang somewhere, and my little baby tomatoes that refuse to grow.

Oh, I almost forgot, this is a Logitech N700, and it's actually called a Speaker Lapdesk. I bought it at Best Buy and the sales guy didn't think it was a cooling pad because of the name, but it is. It should be called a Cooling lapdesk with speaker, but they didn't ask me. Here is a link to Logitech where if you want more information and where they probably don't call all the parts "things".

By Marti at 17 March

Email ThisBlogThis!Share to TwitterShare to FacebookShare to Pinterest
Labels: Rants and Raves 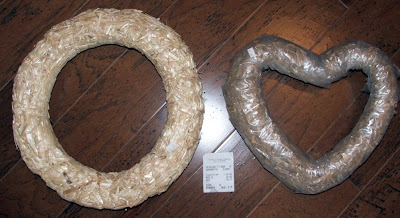 Yes! This is the place to enter your $1 or less makeover! Just put a link to your project in the comments of this post. Challenge ends Sunday at midnight, and I'll draw a name Monday morning.

Now on to the story of the wreath I bought to enter a different contest. 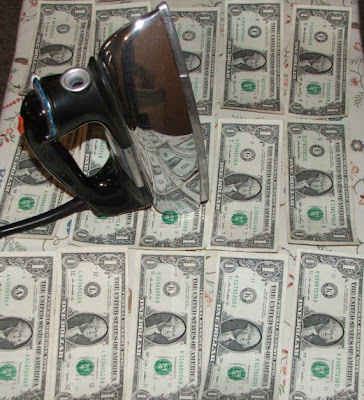 What? You don't iron your money?

Email ThisBlogThis!Share to TwitterShare to FacebookShare to Pinterest
Labels: Tutorials

Since Thrifty Thursday is all about reusing and recycling, I want to challenge crafters to use their creative energy on reusing or remaking. Here are my rules: buy something with a cost of $1 or less, or get a free item, and remake it into something useful or beautiful. Bonus points if the finished item is so great it's hard to recognize from the original.

Anyone who wants to accept my challenge should post a link to their project in my comments next Thursday. If anyone does, I'll put the names in a hat & choose one who will get a prize - a personalized refrigerator note pad.

Email ThisBlogThis!Share to TwitterShare to FacebookShare to Pinterest
Labels: Giveaway 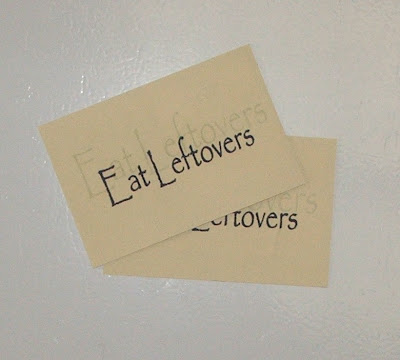 Every time I clean out the refrigerator and see the food containers that have become makeshift petrie dishes, I resolve anew to eat leftovers and leave the science experiments to the experts. And then things get pushed to the back, I forget about them, and it starts all over again.

So today I made a couple of refrigerator magnets to remind us of those leftovers.

Ok, I know this is Friday, but cut me some slack; I did buy this yesterday.

I was browsing the thrift store and happened across this bolt of drapery fabric. I thought it would match my living room colors. What do you think - a good match? 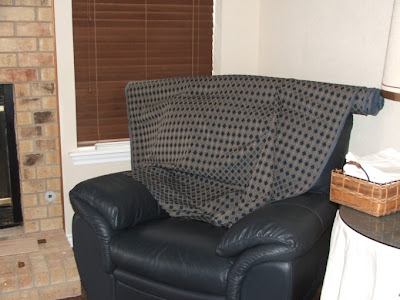 By Marti at 04 March

Email ThisBlogThis!Share to TwitterShare to FacebookShare to Pinterest
Labels: Frugality

Can You See the New Font?


I changed my blog title to ITC Zapf Chancery, and the color to blue. If it's not a font on your computer, you'll just see the default, which is Times New Roman. The Chancery is a fancy font.

There's a poll on the right. Can you tell me if you can see it or not? Thanks!

By Marti at 02 March