Windows 8 Hates Me - And the Feeling is Mutual

Windows 8 is out to get me.  Or maybe it's my computer.  No.  It's definitely Windows 8.  After a month I can say once and for all that I hate Windows 8. 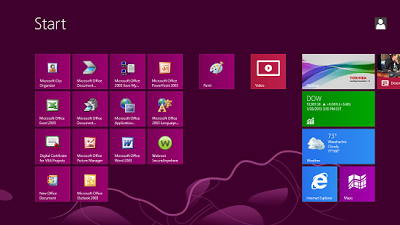 I've gotten used to the tiles as they call the main screen.

I've gotten used to the charms (that's what they call the icons on the left) popping up every time I move the cursor to the left, and I do not find them the least bit charming.  Even worse is when the charms pop up and then zap me over to the tiles screen.

I've gotten used to it not remembering any passwords, EVER, though I don't like that at all, especially when commenting on other blogs and having to type my email and blog url in over and over.  Makes me wish I had an easier blog name and email.  Or my old computer.  I wish that a lot actually.

or suddenly shrinking for no reason. Though I have learned I can change it back by placing two fingers on the mouse pad and moving them as if pulling or pushing on the page.  I've also learned that if I used an external mouse, I wouldn't have problems with the charms or the page sizing, but I sit in the recliner and have no where to put a mouse.

But this latest thing it is doing is just crazy. And aggravating. In the past, it has given me the blue window of death, with a message next to my name saying it was locked and would restart in two days. I was able to work around that by shutting the computer down and then turning it back on again.  And one time it gave me the blue page of death with a message that it was reconfiguring, and it did that for an hour before I closed the computer and took it to Best Buy.  But when I got there and opened the computer, it opened to the tiles screen.  So I took it back and griped at it the whole way home.

But this latest thing, this has no work around that I can find.  Windows 8 took over my computer, and if I had had my sound on, I'm sure I would have heard the evil laughter of the Wicked Witch of the West.  This happened right after I tried to do a Norton scan, the last Norton scan before my 30 free days were over.  Norton wouldn't scan, it wanted me to download updates, and since I wouldn't be using it after that day, I didn't see the need in downloading anything.  So I pressed cancel.  It did, but that's when this screen came up, the purple screen of death I suppose. The whole screen was purple, the camera just made it look like the top is mirrored. If you can't read it, it says "Windows Update.  Sign in and install important updates", and if you can also see it, there is nothing to click on to install updates or anything else. I tried right clicking on the screen, Control/Alt/Delete, and turning off the power button. Nothing worked. 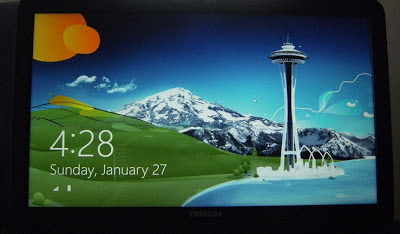 Closing the computer top seemed to shut it down, but when I opened it again, I saw this screen. Any movement of the mouse took it back to the purple screen of death though. I couldn't remove the battery, and really was afraid to do that since that was the final nail in the coffin of my last computer's hard drive. So I just unplugged it and thought I'd just leave it on and the battery would die in an hour or so. But no, it kept going to sleep and saving the battery. So I gave up and decided I'd have to take it back to Best Buy this morning.

But when I opened the computer this morning to make sure the purple screen was still there, the computer battery was finally dead. I plugged it in, and the tiles screen came up as usual, and everything seems to be back to normal.

But I'm sure the evil Windows 8 dictator is still lurking within, waiting for me to be in the middle of something important before he deploys the final lockdown.