How to Find the Expiration Date of Dr Pepper Part 2

I received a comment on a post titled How to Find the Expiration Date of Dr Pepper and Snapple Unknown asked:

The easy answer is September 26, 2018, if it is a regular Dr Pepper.  Read on to find out how I arrived at that date.

I bought a can of to illustrate but I'll use Unknown's numbers instead of the numbers on the bottom of my can. 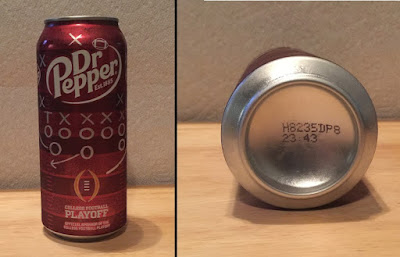 The FAQ (Frequently Asked Questions) page on the Dr Pepper website says the only way to read the code on their products is to call their 800 number. But that's not quite true, at least for the top row of date codes, according to the Dr Pepper employee I talked to. It may be true about the numbers regarding the plant where each can or bottle is made.

Remember the decoder sheet I got from the man stocking Dr Pepper at the store?  (Click to enlarge.) 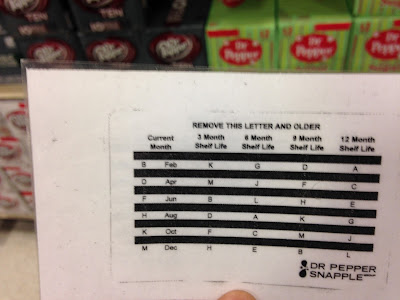 The black lines didn't photograph well, but you can fill it in easily. The first column is A-M, without an I because it looks too much like J. Second column is January-December. Third column is J-M,A-H, again no I, and so on with the next columns.

Now, just in case you are curious, here is what I've learned about the other numbers in the code.  The HX is the code for the manufacturing plant that made the product, but I don't know which plant that is.  I'm in Texas and most of the codes I see on the Dr Pepper cans and bottles (when I remember to look) are numbers like DP3, DP8, etc.  Dr Pepper Snapple bought out other drink companies too, one of which is Hawaiian Punch, originally bottled in California.  So maybe the HX designates that bottling plant.  But that's just a guess.  I really have no idea.  Maybe Unknown will come back and tell me where he or she bought the can.

The next line on Unknown's can is L3 1331, and it was probably written L3 13:31.  L3 is the shift number which is often necessary when a plant has more than one shift working at the same time making the same thing, and 13:31 is the time of day that can was produced.  That would be 1:31 PM for those of us who struggle with military time.  If you notice on my can, there is no shift number.  It could be there that that plant only has one production line, or just one production line of Dr. Pepper in cans.